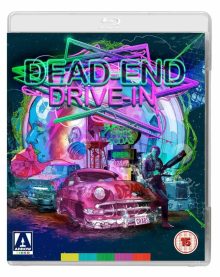 Based on a story by Peter Carey, Dead-End Drive-In is one of Quentin Tarantino’s favourite movies and that’s kind of no surprise as it features lots of quirky characters, a cool soundtrack, some excellent set-pieces and has ‘cult classic’ written all over it!

Set in a near-future where the Australian economy has failed and violent, badly-dressed gangs roam the streets, the powers-that-be have decided to lure delinquent youths into drive-in cinemas and then keep them there. What once were scruffy, run-down places to make out in, and maybe watch naff movies too, have now essentially become a form of concentration camp for the unruly and unwanted controlled by an uncaring government.

When Jimmy heads to the drive-in on the outskirts of the city, he and his hot girlfriend, Carmen, soon finds their 56 Chevy car useless when policemen nick two of its wheels while they’re busily making out. Jimmy is distraught because he borrowed the car from his older brother who’ll kill him if he damages it. In the cold light of day, they find the supervisor of the drive-in who’s unable and unwilling to help them, which doesn’t seem to bother Carmen as much as it does Jimmy, who then spends all his time trying to work out a plan of escape, while his girlfriend becomes increasingly integrated into this weird dystopian drive-in society on the edges of the city.

Things soon turn sour when the government dumps a group of refugees into the drive-in cage, expecting them to just easily integrate with the under privileged population already there (sound familiar?). Things soon turn ugly within this microcosm of wider society, but at least Jimmy sees his opportunity to make his escape and he takes it, with explosive consequences…

Dead-End Drive-In is quite an intelligent film that is disturbingly relevant in today’s unsettled world where governments impose conditions on their publics without thinking about the longer-term consequences. It’s director, Brian Trenchard-Smith, was a key figure in the Ozploitation movement of the 70s and 80s, and was responsible for such cinematic treats as The Man from Hong Kong, Stunt Rock and Turkey Shoot. Here, Trenchard-Smith ups the ante in the dystopian future subgenre with intelligent panache, reflecting the preferred ‘day-glow’ colour schemes of the early eighties, and the music of the day with its New Wave soundtrack.

Dead-End Drive-In is well shot and features some great stunts to punctuate some sturdy performances from a game young cast who really give it their all, even if their ‘all’ isn’t always all that great…

And talking of the cast, I guess the most impactful presence on the cast list must be the actual drive-in set itself, which really becomes an additional character in the movie, with its burnt-out cars, wild graffiti, imposing high fences and walls, and run-down, grubby screen, replete with its grumpy projectionist and caretaker. Plus, clued-up viewers can also enjoy trying to identify the films being screened at the drive-in, which include the aforementioned (and completely crazy), Turkey Shoot.

Overall Dead-End Drive-In is a very satisfying cult film that remains valid today because of the deeper, political themes that run throughout its running time.

Arrow Video are distributing Dead-End Drive-In on DVD and Blu-ray. As per usual with Arrow Video there are some decent extras on the disc including:

The Stuntmen (49 mins) – B.T. Smith’s classic 1973 TV documentary on stuntmen Bob Woodham, Grant Page and a number of other Australian stunt performers. Various stuntmen are interviewed about their stunt gags and they talk candidly about their problems and injuries and what motivates them to do the job they’ve chosen to do. This is fascinating and informative stuff, and it’s good to know that most stuntmen are wisely scared of many of the dangerous stunts they do, although they carry on regardless as they love the exhilaration they get from successfully performing a complex stunt.

Hospitals Don’t Burn Down! (24 mins) – A Brian Trenchard-Smith short film he did as a public information film to highlight the dangers of fire in hospitals. What makes this public information film stand out from most is it’s exploitative use of fire and stunts to get its important message across. There are some impressive fire stunts to be seen and plenty of Aussie humour on offer!