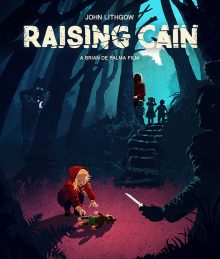 A sublime slice of melodramatic trash, excessive (but oh so wonderful) homage and noir trappings from the unsung master of cinematic styling, Raising Cain is a neglected masterpiece. De Palma always seems to get the short shrift when it comes to the appreciation he should receive. Sure he has some bona-fide classics under his belt that are often praised by the critical establishment: Carrie, Scarface, The Untouchables. But some of his so called “lesser” films are worthy of just as much love, one of those being this magnificent gem. Thanks to Arrow Video and filmmaker/restorer Peet Belder Gelderblom, Raising Cain can now be experienced as it was intended in this new exclusive director’s cut.

A taut thriller, a melodramatic trash-fest, a Psycho/Peeping Tom homage, an exercise in cinematic style, an condemnation of the early 90s obsession with child shrinks and therapy, a director referencing and lampooning his own previous work and style: Raising Cain is all of these and so much more. It’s the tale of Cater Nix (Lithgow) a loving father who’s fragile state of mind snaps when he discovers his wife’s infidelity bringing to the surface several different personalities, not least the overbearing and evil minded Cain (also played by Lithgow). As the Cain personality begins to take over, he leads Carter down an ever increasing path of murder and despair and De Palma pulls out all the his cinematic stops to enthral and horrify in equal measure. 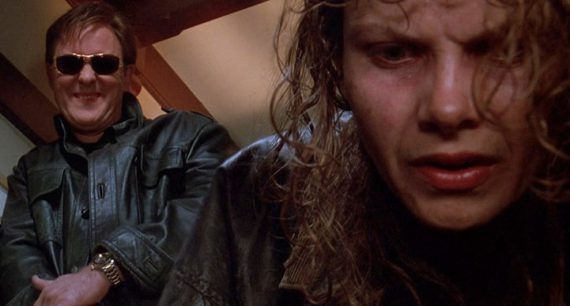 A pulpy pot-boiler for sure, Raising Cain is nevertheless some rip roaring entertainment bolstered by an impressive cast and a director doing what he does best. A visual stylist at heart, De Palma crams the film with cinematic technique, from his trademark extended single takes (in this a case an almost 5 minute walk and talk through the corridors and down the stairways of a labyrinth police headquarters: which ends in a nasty shock!), to extreme close ups (giving the sense of claustrophobia), to wonderful widescreen shots (where the details in the background are just as important as the action in the foreground) and to the fantastic score by regular collaborator Pino Donaggio. It’s not just De Palma firing on all his cylinders though as his game cast are fully on board with the dialled up to 11 drama, tension and, in several instances, outright horror! This is obviously Lithgow’s show, playing no less than 5 characters, and he attacks each one with gusto staying just the right side of OTT and expertly portrays a man coming apart at the seams. Equally good is Davidovich as the put-upon-turned-vengeful wife who is perhaps the one shred of realism in a world of heightened reality.

Yet while as stylish and fun as the original release of Raising Cain was this all new release features the original directors cut, the film restructured as it was meant to be seen. Word is from the copious and impressive array of extras De Palma got cold feet over his original cut and re-cut it to flow more conventionally. Thankfully Peet Belder Gelderblom (as big a fan of this flick as this nobody reviewer) re-edited the film to as it should be and De Palma himself has given his blessing to this new director’s cut. Raising Cain is, simply, now even better. Telling the same story but in a different order and in a much more satisfying (not to mention mysterious) manner the film wears its Psycho/Hitchcock influence even more brazenly on its sleeve. Now starting from Davidovich’s point of view (giving off a Janet Leigh in Psycho vibe), the film builds to the introduction of Lithgow’s character, the mystery of his fractured psyche now unravelled in a more controlled and rewarding manner. 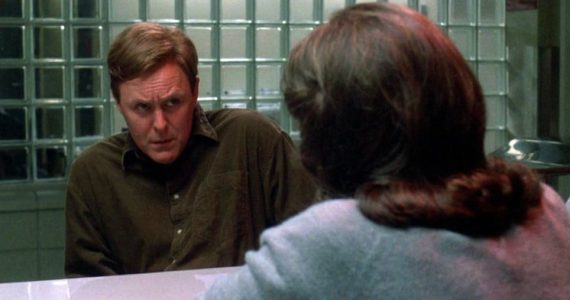 While the new cut of the film may not persuade the naysayers that Raising Cain is any better, for those who appreciate the flick for what it is will get much enjoyment from this new version of the film. To coin an overused phrase, Raising Cain is a marmite film: you’ll either love it or hate it. The Psycho references may be a little heavy handed for some (with scenes from the film re-constructed wholesale!) and the heightened nature of proceedings a little hard to swallow but this De Palma fan loves it all. Whether the director was pushing his stylistic flourishes to their limits to make the best thriller he could or simply lampooning his own Hitchcock referencing obsession doesn’t really matter as Raising Cain is a wild ride full of drama, tension, absurdity and oodles of style.

Raising Cain is released from Arrow Video on dual format DVD and Blu Ray on January 30th 2017. As well as featuring both the Theatrical and Directors Cut of the film the disc is packed with extras including interviews with principal cast and crew members, a video essay about the different versions of the flick and best of all a short video doc by Peet Belder Gelderblom about how he completed the new cut, showing the differences between the two versions. Good stuff.