Dietrich Bruggemann, director of Stations of the Cross, took some time out of promoting his latest film to answer some of our questions.

Katy Vans Apart from 3 scenes, the camera is static; why did you choose this way to shoot and what problems did it create for you? How much preparation was involved?

Dietrich Bruggemann Back in 2005, I had shot my first feature in that same fashion. That was a comedy, and I was fascinated how well that extreme reduction worked, both for the drama and for the fun. So I had always kept it in the back of my head, planning to do another film in locked-off tableaus some day. When that “14 stations” idea crossed my mind, I realized this would be the opportunity. The way of shooting a film like this is entirely different from shooting a normal film, it almost feels like a different art form. And I guess the way of perceiving is also quite different. You allow the spectator to overlook the whole system, all the time. You don’t guide attention. As a director, you need to make sure that the whole thing works in all places, all of the time. And on the contrary, it’s also about letting go and loosening your grip. You can’t work on every little word, like you normally do. You need to trust in the actors and accept what they give you, from a certain point. Preparation is of course vital. The math is rather simple. A film is made in three stages: Writing, shooting, editing. When you drop one, the others gain weight. Editing is more or less eliminated on a film like this, so writing and shooting need more care. On the other hand, if you don’t write a script, but improvise, you’ll probably find yourself editing for quite a stretch of time.

KV The nature of the shooting means every scene is one shot; how much rehearsal time did you need before shooting to ensure you could shoot this way? How many takes did you do of each scene? Have you directed theatre before?

DB We had one day of rehearsal per scene, mostly. Ten out of those 14 scenes were rehearsed for a day, most likely on the original set, then shot the next day. Scenes 9, 12 and 14, which don’t have lots of dialogue, but mostly consist of choreography, were rehearsed and shot on the same day. Scene 13 does have some dialogue, but is the only scene that has no children involved, so no legal restricitions of only shooting for five hours, was also rehearsed and shot on the same day. We did as many takes as we felt necessary. On the first scene, it wasn’t that many, maybe four or five. Doing that scene was extremely exhausting for Florian Stetter, who plays the priest, so we couldn’t have done this for much longer. On other scenes, especially those involving Maria and the boy, we did a lot more, sometimes 15. At a certain point, the scene sinks into your unconscious, you learn it like you’d learn a song, or riding a bicycle, which works automatically. And that’s where the good stuff really starts.

KV Do you believe in God? Did you have a religious upbringing? Do you think this film could offend Catholics? Are you bothered?

DB I had a religious upbringing, in parts. I actually like the idea of a God, watching over us etcetera, but I wouldn’t call myself a believer. I’m more of a materialist, I think this world is the only one we have, there’s no proof of any hereafter, so everything good and great happens either here or nowhere. So if I’m in favour of the idea of transcendency, or “God”, couldn’t that also be a part of this world? Could we find him here? Sorry, digressing, I do have some respect for organised religion, because what I see is just people gathering on Sundays, singing songs, forming a community and supporting each other. I guess that’s a good thing, as long as your priest doesn’t tell you scary tales about Satan or molests your kids or sends you off to war. Maybe this film is kind of a test: If you’re catholic, and offended by it, you’re not a cool Catholic. Maybe this is also hubris, and I’ll go to hell for it. I’m not exactly bothered. I guess the only sensible line you can draw is not between believers and atheists, or Christians and Muslims, or men and women, or capitalists and socialists, or whatever, but just between decent people and idiots. And that’s exactly why everything is so bloody complicated. 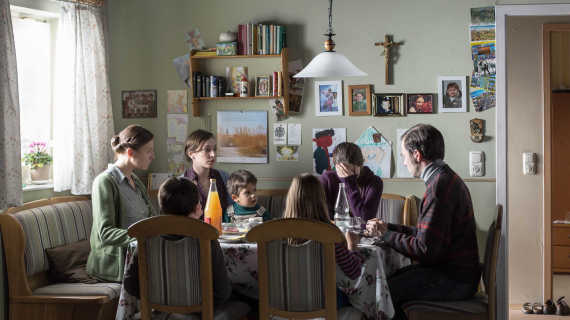 KV I found myself laughing in several places, there is a dark humour to the film, do you think that was necessary to alleviate the heavy emotional scenes? I felt it could be seen as a commentary on how ridiculous so much religious dogma is…

DB Be my guest! I was delighted to hear all these laughs, and I invited all of them. The truth is mostly funny. My favourite screenwiriting handbook gives a brilliant definition of comedy as “truth and pain”, which I think is also a brilliant definition for what we search for in movies, altogether. Many films these days, especially in the big festivals, put a lot of effort in ruling out the funny side of things. But if you really want to grasp a phenomenon, a situation, whatever, then you need to be aware of those different sides. And there’s mostly a funny one, even if it’s sometimes pitch black. From Maria’s point of view, Roxette is satanic. And she’s got a point – of course rock music does have some power over us. And that’s exactly why we like it. Saying that music is satanic is just a way of acknowledging that power. For the others, it’s hilarious. Worlds collide, and we laugh.

KV What reactions have you had in catholic countries to the film?

DB Most people loved it. Many people in their 50s told me that this felt like a documentary about their own childhood. Some people didn’t love it. One man in Poland got really angry. They started a heated conversation, and stopped translating, so I can’t really say what happened. Then he left. But that was in Warsaw, where everybody is largely like you and me. No idea what would happen when you screened this film in some remote village in Poland or southern Italy or in the Vatican or somewhere.

DB Just in the finishing stages of shooting a comedy about neo-nazis. The title will be “Heil”

Stations of the Cross is released today in the UK in selected cinemas by Arrow Films. You can read Katy’s review of the film here.