I love John Carpenter. He makes the sort of quality genre movies I adore and is responsible for a number of my all time favourite films. However, even a fan like me can’t deny his career went off the rails further down the line. The 80’s were a little wobbly with cast-iron classics like The Thing rubbing shoulders with enjoyable but flawed films like Prince of Darkness and Christine. Then in the 90’s things really started to go wrong. In the Mouth of Madness aside, which is very good, his output in the decade was not great and his output slowed down after that. Since the turn of the millennium he’s only directed two features and a couple of episodes of Masters of Horror. He is advancing in years so maybe he’s just too old to put the legwork in to making movies anymore, but you get the feeling he maybe just ran out of creative steam after a while or couldn’t get to make what he wanted anymore.

So, it’s interesting (and brave) that the cool new kids on the UK physical media block, Indicator/Powerhouse Films, have decided to add two late-period Carpenter films to their early slate, Vampires and Ghosts of Mars. Neither film has a great reputation, but, being a fan of the director, I was willing to give them a chance and took the plunge. The films are being released separately, but I figured I’d review them together for obvious reasons. My thoughts are below. 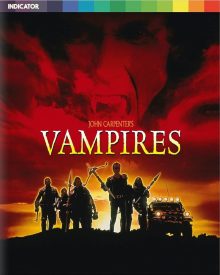 What both of these films have in common is that they seemed to be jumping on a bandwagon when they were released. The film Vampires looks to be cashing in on is From Dusk Till Dawn. Like Robert Rodriguez’ film, it roughs up the vampire myth and sets it in the American desert (New Mexico here instead of Texas and Mexico in the earlier film). Jack Crow (James Woods) heads a team of hard-drinking tough guys, commissioned by the Catholic church to kill vampires who are quietly terrorising the world, little known to the general public. When all but one (Anthony Montoya – played by Daniel Baldwin) of Crow’s crew are massacred by the super-powerful master vampire Jan Valek (Thomas Ian Griffith), he sets out to get revenge, as well as to stop Valek retrieving an ancient Catholic relic that’s set to give him the power to be immune to sunlight.

One thing that struck me from the off-set and again seems to be taking a leaf out of From Dusk Till Dawn’s book, is that the film is impressively gory. The massacre of Crow’s team is particularly messy and I mean that in a good way. A few of the set-pieces are a lot of fun, with liberal amounts of blood and limbs getting splashed and chucked around. I did find the better scenes were early on though and the final couple of action sequences weren’t quite as good the first few, leading to a slightly disappointing end to proceedings. 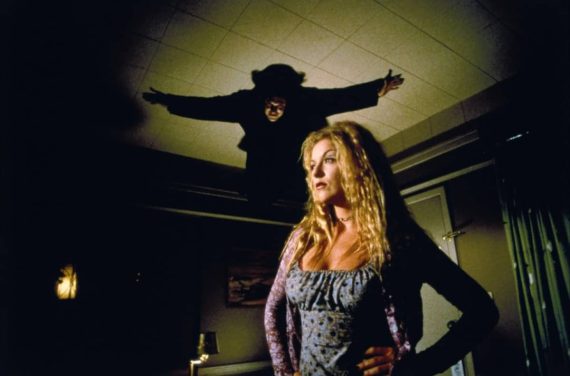 It’s an ultra macho film full of sunglasses-wearing bad-asses, slow motion walks away from explosions and endless cheesy pay-off lines, which plays into my type of action movie tastes. It’s all pretty daft, but kept me smiling. The treatment of women here is rather dubious though. Sheryl Lee’s character Katrina, a hooker who gets bitten but proves useful to Crow, gets an especially tough time.

The quip-heavy dialogue isn’t as sharp as Tarantino’s in From Dusk Till Dawn, but it’s enjoyable and quotable enough. Largely it works due to James Woods’ performance. To be honest, he is the film’s saviour. Without him, I don’t think I’d enjoy the film as much as I did. It’s hard to ignore some of the clunky exposition, lazy cliches or just how silly everything is, but Woods seems to relish his tough-guy lead role and sells the nonsense he’s working with.

The film is nicely cinematic as usual. Carpenter has always been good at taking B-movie material and making it look and feel like the main feature. He makes great use of his full 2.35 : 1 ultra widescreen frame and complements this with moody interior/night lighting and hot, red exteriors.

It’s dumb, a blatant cash-in and far from Carpenter’s best, but the director still makes the best of the poor material and Woods’ enthusiasm keeps it all afloat. I certainly enjoyed myself, even if deep down I didn’t think I should. 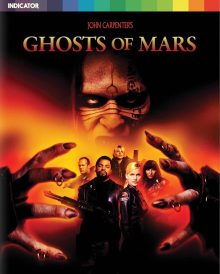 Ghosts of Mars joined the handful of Mars related films released at the turn of the millennium, which included Red Planet and Mission to Mars. None of them were particularly successful commercially and all faced the wrath of the critics who tore them to pieces. I never saw any at the time as I was too stuck up and lead on by the critics (who’s kidding, I still am when it comes to cinematic releases!), but my Carpenter love has finally talked an older me into giving Ghosts of Mars a chance.

Set some time in the future (of course), Ghosts of Mars is told largely in flashback by Lieutenant Melanie Ballard (Natasha Henstridge), who is seemingly the only survivor of a team of police officers sent to transfer a notorious criminal, Desolation Williams (Ice Cube), from a mining colony on Mars to the city of Chryse. When they arrived the colony looked deserted, but they soon found out otherwise. The colonists had been possessed by a strange spirit which turned them into some sort of S&M goth nutcases who like to chop people’s heads off. So of course things got a bit messy, particularly as the spirit could inhabit the team members’ bodies too.

So, on top of jumping on the Mars bandwagon, the film borrows from some of Carpenter’s earlier films. You’ve got an invisible monster that can inhabit people’s bodies/minds like in The Thing and the team get trapped in a prison complex and surrounded by bad guys, as in Assault on Precinct 13 (although Carpenter borrowed that idea from Rio Bravo originally). The problem is, when you compare this film to those, you realise just how much better they are. For starters, take the idea from The Thing of the enemy being inside us. This causes the audience to second guess who the bad guy is right up to the end credits in the 1982 film, but here the Martian spirit instantly makes people look a bit dazed before they soon start piercing themselves and dressing up like extras from a bad Mad Max rip-off.

Carpenter’s been able to eke tension and excitement out of ideas without such devices though, which makes it all the more sad that Ghosts of Mars never truly thrills. It is fairly enjoyable to watch as it’s well paced and contains plenty of action, but the set-pieces are all totally forgettable. There are a few cool decapitations and lost limbs to spice things up, but it’s not extravagantly gory in the same way Vampires or indeed The Thing was.

Another problem here is how dated the film looks and feels. Carpenter’s better films feel pretty timeless, but this, despite being one of his most recent titles, smacks of the 90’s, even though it was released in 2001! This is partly down to the bog standard sci-fi production design, but also the music, which is not bad in its own right and I admire Carpenter going down a metal route instead of his usual synths, but it sounds like a 90’s metal album playing the background rather than a timeless orchestral score. All in all, it feels a bit ‘straight-to-video’ which shouldn’t happen to a Carpenter film.

Like with Vampires, the film is wildly cliché-ridden and cheesy too. The previous film just about got away with it due to its strong lead and some enjoyable set-pieces, but this is all a bit too flat to pull it off. One of the main problems is the cast. On paper it’s a pretty decent genre movie lineup – Natasha Henstridge (still best known for Species at the time), Ice Cube, Jason Statham and Pam Grier. However, Henstridge isn’t quite charismatic enough to pull off the bad-ass heroine, Ice Cube seems a bit bored, Statham hadn’t quite sussed out his action hero qualities yet and Grier barely features.

So, it was a big disappointment, although I wasn’t expecting much to be honest, so it probably lived up (or down) to my expectations. As a daft bit of fun it’s effective enough I guess and, had it been directed by an unknown, released straight-to-video and I’d randomly picked it up, I might be a lot more forgiving. However, this is from possibly the best genre director in the business (or at least he was), so I was quite saddened to see how mediocre it turned out.

Vampires and Ghosts of Mars will be re-released by Powerhouse Films on Dual Format Blu-Ray & DVD on 30th January as part of their new Indicator label. I saw the Blu-Ray versions and the picture and sound quality are both excellent.

They’re both great packages. The two part Guardian interview makes the purchase of both lesser Carpenter films worth the cash. He’s honest, fun and revealing throughout. I have a habit of putting special features on in the background whilst I do something else and usually drift in and out of paying attention to what I’m listening to, but here I couldn’t help but listen carefully from start to finish. Carpenter is a great guy to listen to, particularly if you’re into making films yourself. I’ve always been a fan of his commentaries too and the two here are recommended listening as always. They don’t quite have the spark of the ones he’s done with Kurt Russell, but they’re still great, with the technical process of making the films covered in depth without getting dull. He has a great sense of humour which shines through and a frankness that’s refreshing. He and Henstridge bounce off each other nicely too, making the Ghosts of Mars commentary the more fun of the two although it maybe skims over some of the technical stuff when compared to the other.

Some of the other featurettes are interesting and fun to see (I particularly enjoyed watching some metal guitar legends thrashing away recording the Ghosts From Mars soundtrack), but it’s the interview and commentaries that make these releases easy to recommend, even if the films aren’t particularly great.