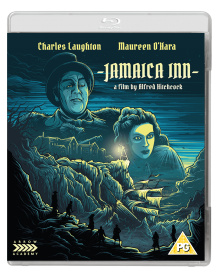 Apparently overlooked in the canon of Hitchcock’s films, Jamaica Inn deserves to find new recognition with this Blu-ray and DVD release from Arrow Academy.

Set against the dark and dramatic Cornish coast, Hitchcock’s adaptation of Du Maurier’s novel follows Mary, a determined and principled young woman, as she is plunged into the corrupt world of a wreckers gang. The atmosphere is captured in the opening shots; the boiling crash of the sea, the silver moon surrounded by writhing clouds, and the dark billow of a man’s cloak as he obscures a cliff-top lantern. This is the world of the film: too gothic to be real life, but just beautiful enough to hold you captive.

Jamaica Inn’s protagonist Mary (Maureen O’Hara) is amazing and I fell in love immediately. From her outrage at Joss’s threatening behaviour, to her fierce love for her vulnerable aunt, Mary is surprisingly headstrong and independent for a film made in 1936. While many of the characters appear larger than life, Mary is the lynchpin of common sense and bravery. For her first major role, O’Hara is a perfect heroine in a sea of flawed characters.

In fact, while the setting of the film and its dark aesthetic is vital to the tone, it’s Du Maurier’s characters which set the pace. Joss (Leslie Banks) skulks around clifftops scowling at anyone who talks to him, ordering murder without a second thought, but it’s the corrupt Judge Sir Humphrey (Charles Laughton) who is the real villain of the piece. With Jamaica Inn’s bare floorboards and straw-strewn rooms, Joss is almost a figure of pity as we see the real power is held by those at the top of society. The settings emphasise this too. We cut from the sea-rocked ships, the salt-soaked darkness of the shore, to Sir Humphrey’s mansion of clean white marble and splendour. Joss is upfront about his violent ways; Humphrey hides pure evil behind luxurious silks and jewels.

Mary’s aunt Patience meanwhile (Marie Ney), is fascinating but overlooked. The aptness of her name is instantly apparent at the introduction of her violent husband. Patience’s devotion to Joss is often questioned but never explored, one thing that frustrated me about the archetypal nature of these characters. As a minor point, references to her ‘lost looks’ don’t quite land (her ringlets appear perfect even after years of work). Despite all of this mystery I love Patience and wish we could have seen a deeper part of her character. Her scene alone with Sir Humphrey in particular resonates deeply for a character who is mainly pushed to the side.

The pace of the film also caught me by surprise. Jamaica Inn never stops. Action and intrigue jump from scene to scene, with even the quieter moments underscored by intense dramatic irony. While it sometimes feels like a list of events rather than a plot – perhaps Sir Humphrey’s reveal comes too soon in the story – being swept along by events is so enjoyable that this can be forgiven. With revelations and cliffhangers around every corner, Hitchcock truly lives up to his title of the “master of suspense”.

This release shows the film after a 4K digital restoration by The Cohen Film Collection and the BFI. The quality is superb. Far from being lost in muddy black and white, the details of the picture shine with every swirling wave crisp and sparkling. The beautiful backdrop becomes even more mesmerising. In addition, the extras are great: an audio commentary from film critic Jeremy Arnold will be fascinating for die-hard Hitchcock fans, while Donald Spoto’s visual essay is an unusual and unique addition to this Dual Format release.

Jamaica Inn is out now on Blu-ray and DVD.