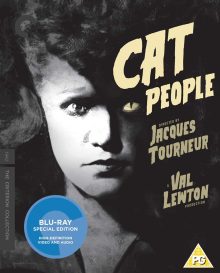 Cat People is a film I saw a long time ago and have vague fond memories of, so I was keen to check out The Criterion Collection’s UK Blu-Ray release. I thought it might also get me in the mood for the usual October horror movie celebrations we film bloggers like to partake in.

From the title, Cat People sounds pretty silly and trashy, and, by all accounts, it was originally intended to be a cheap crowd-pleasing fright-fest. RKO Pictures were in trouble after Citizen Kane proved an expensive commercial failure on release (which is surprising to hear now). So they hired writer Val Lewton as a new producer for the studio, strictly to make low budget horror movies to help recoup some cash. His first film was Cat People and, although he did keep it under budget as promised and it made a lot of money, he turned a potentially daft concept into something quite poetic, subtle and intelligent.

The film sees the beautiful Serbian fashion sketch artist Irena Dubrovna (Simone Simon), now living in New York, meet and quickly fall in love with Oliver Reed (not the booze loving actor, but a character played by Kent Smith). The couple get married soon after, but cracks soon appear in their relationship as Irena refuses to consummate the marriage. She believes in an old legend from her home town about the ‘cat people’ – those who had turned to witchcraft, devil worshipping and other wicked sins through their slavery to the Mameluks, who were driven out by King John. John had these sinners killed, but some escaped to the mountains, to become cat people. Supposedly these half human, half feline creatures kill those that they kiss, so, believing she is one of their descendants, Irena is afraid of the consequences of taking her new husband to bed.

The waters are further muddied when Reed’s work colleague Alice (Jane Randolph) confesses her love to him and, aided by the cracks appearing in his new marriage, he reciprocates. As Irena begins to suspect something going on between the two, her jealousy unleashes a dark, possibly cat-like side. 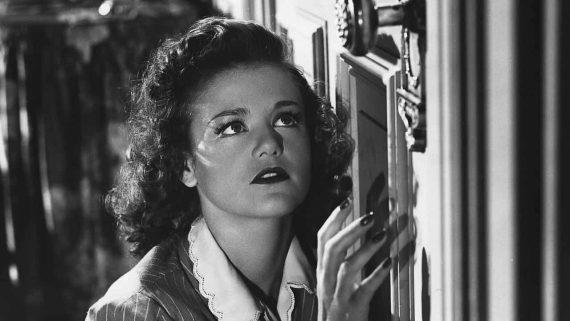 Cat People was directed by Jacques Tourneur, but the special features included in this fine Blu-Ray package suggest that Lewton’s fingerprints are all over this. He liked to imply and not show the monsters in his films, using clever cinematography and editing techniques to spook his audiences rather than use naff costumes or lashings of blood. This was first demonstrated here and followed throughout his horror films made for RKO. The producer liked to be heavily involved in the creative planning of his films – ‘pre-directing’ them as it’s put in an enclosed documentary. Being a writer by trade originally, he is known to have made uncredited script rewrites on most of his films too.

Whoever was responsible for it, the film is beautifully made. The cinematography by Nicholas Musuraca (who would later shoot Tourneur’s classic noir, Out of the Past, a.k.a. Build My Gallows High) is astonishing, making great use of shadows and high contrast lighting. This look is a vital part of the film’s biggest selling point, its horror set pieces. The two most famous sequences both involve Alice being stalked, once whilst walking the streets at night and another in a dark swimming pool. These are both masterclasses in suspense and hiding the threat. Wonderful editing, great use of sound and shadows (as well as reflections in the pool scene) create scenes of horror that remain quite frightening almost 75 years later. The film’s final scenes are expertly crafted too. 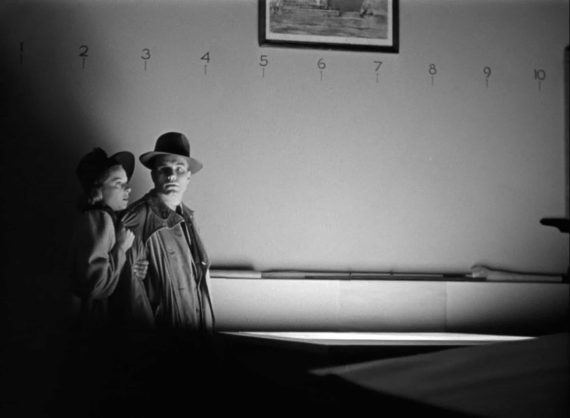 As well as showing restraint in its set pieces without losing their impact, the film impresses through its mature themes and ambiguous nature. Psychological and sexual elements are touched upon, yet the film doesn’t try to answer all of the questions raised, leaving food for thought and mystery behind for the audience.

However, as highly as I’m praising the film, I must say there was a little something lacking this second time around. I think, although the set pieces are very strong, there aren’t enough of them to create a consistently frightening film and, as ahead of its time the film’s psychological horror content originally was, it does feel a little dated and slightly clunky at times now.

I found the film a little slow moving too. It’s far too short (73 minutes) to be considered boring, but I wasn’t as gripped as I expected, largely due to a fairly flimsy narrative. However, I think the film still deserves a high rating as the craft on display is wonderful. It thrives on its dark, seductive atmosphere and truly shines in some key showstopping scenes, so as a groundbreaking and masterfully constructed piece of cinema it must be applauded.

Cat People is released on Blu-Ray on 26th September in the UK by The Criterion Collection. The picture and sound quality is fantastic, as is to be expected from Criterion, presenting the film in its original aspect ratio and providing a print which is clean, detailed and has a rich dynamic range, highlighting the beautiful high contrast cinematography.

– Audio commentary from 2005 featuring film historian Gregory Mank, with excerpts from an audio interview with actor Simone Simon
– Val Lewton: The Man in the Shadows, a 2008 feature-length documentary that explores the life and career of the legendary Hollywood producer
– Interview with director Jacques Tourneur from 1977
– New interview with cinematographer John Bailey about the look of the film
– Trailer
– PLUS: An essay by critic Geoffrey O-Brien

It’s an extensive set of extras. The commentary is decent, covering everything you’d want to know about the film. The Val Lewton doc is fascinating and helps to appreciate the heavy influence he had over his films as well as give a glimpse of his own unusual character. The John Bailey interview is the shortest feature, but gives a surprisingly in depth look at how the beautiful cinematography was produced. I haven’t had chance to watch the Tourneur interview yet and don’t have a copy of the essay unfortunately.