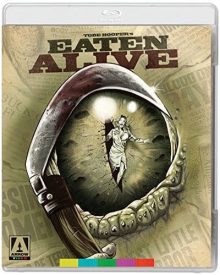 The very eccentric Judd (Neville Brand) lives in a backwoods motel, off the beaten track. Considering that he’s an hotelier he certainly doesn’t appear to cope with company very well and seems to end up killing most of his guests – Maybe he just prefers to jabber to himself, as he frequently does! And when they’re in their dying death throes he usually finishes them off by pushing them into the swamp pool next to his motel; a pool that has a very mean resident, namely a very large alligator that he swears blindly is his pet crocodile!

The only person who seems to come and go as he pleases, without being nastily dispatched, is the equally unpleasant bully, Buck (Robert Englund), who frequently hassles Judd for cash and takes the easy women that he finds at the local bar over to Judd’s place to shag them in peace. In fact the film starts off with Buck trying to get a new hooker at the nearby brothel to ‘take a deposit via the back door’, to which she flatly refuses and runs off, finally ending up in the hands of crazy old Judd. Unfortunately for her, when Judd realises that she’s not the ‘nice girl’ he first thought she was, he kills her in a particularly brutal way with a large rake. 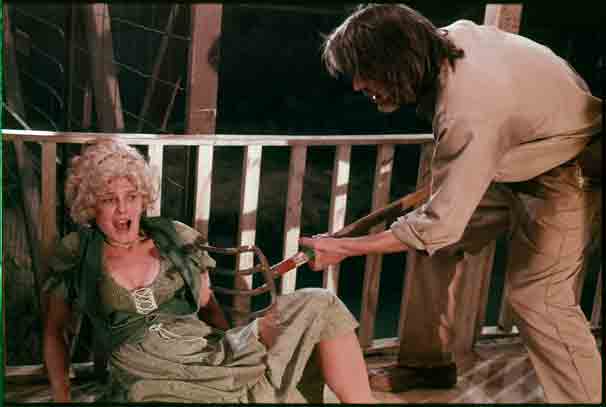 Judd’s motel becomes rather busy the following night when a married couple with a young daughter, Angie, arrive; hastily followed by a father and daughter looking for their missing daughter/sister who just happens to be the inexperienced whore who was murdered the night before.

When the little girl finds Judd’s pet monkey dead in a cage on his veranda, over-looking the swamp, the crazy, drunken hotelier seems to snap and tries to kill her, forcing the little girl into hiding under the hotel. All the while her parents argue upstairs, seemingly unaware of what’s happening to their daughter, until Judd decides that they’re going to be next on his pet ‘crocodile’s menu…

Eaten Alive or Death Trap, as it’s sometimes known as, is a film that I’ve been meaning to watch for ages, ever since I first saw it on the shelves of my local video hire store back in the early Eighties, prior to it disappearing during the ‘video nasty’ debacle in 1984/5. Having experienced Hooper’s previous film, The Texas Chainsaw Massacre, I’d been eager – as a ‘see it if you dare’ teen – to watch his follow-up to that seminal horror hit. Unfortunately, copies were suddenly scarce and, since I didn’t have my own video player back then, I had to rely on friends to provide my video ‘highs’ and some of them weren’t really horror fans. Fast forward to 2016 and I jumped at the chance to review this fear flick, which has been on my ‘must watch’ list for so long.

So was it worth the wait? Well, I guess it kind of was, but not for all the reasons that my teenage self would have craved for back in the day. For instance Eaten Alive is not a particularly gory or violent film, at least not by today’s standards, and it’s not as salacious as a hormonal teen might wish it to be either! In fact, apart from one or two murders, Eaten Alive is fairly tame when compared with the likes of the Hostel or The Human Centipede films that are more prominent nowadays. 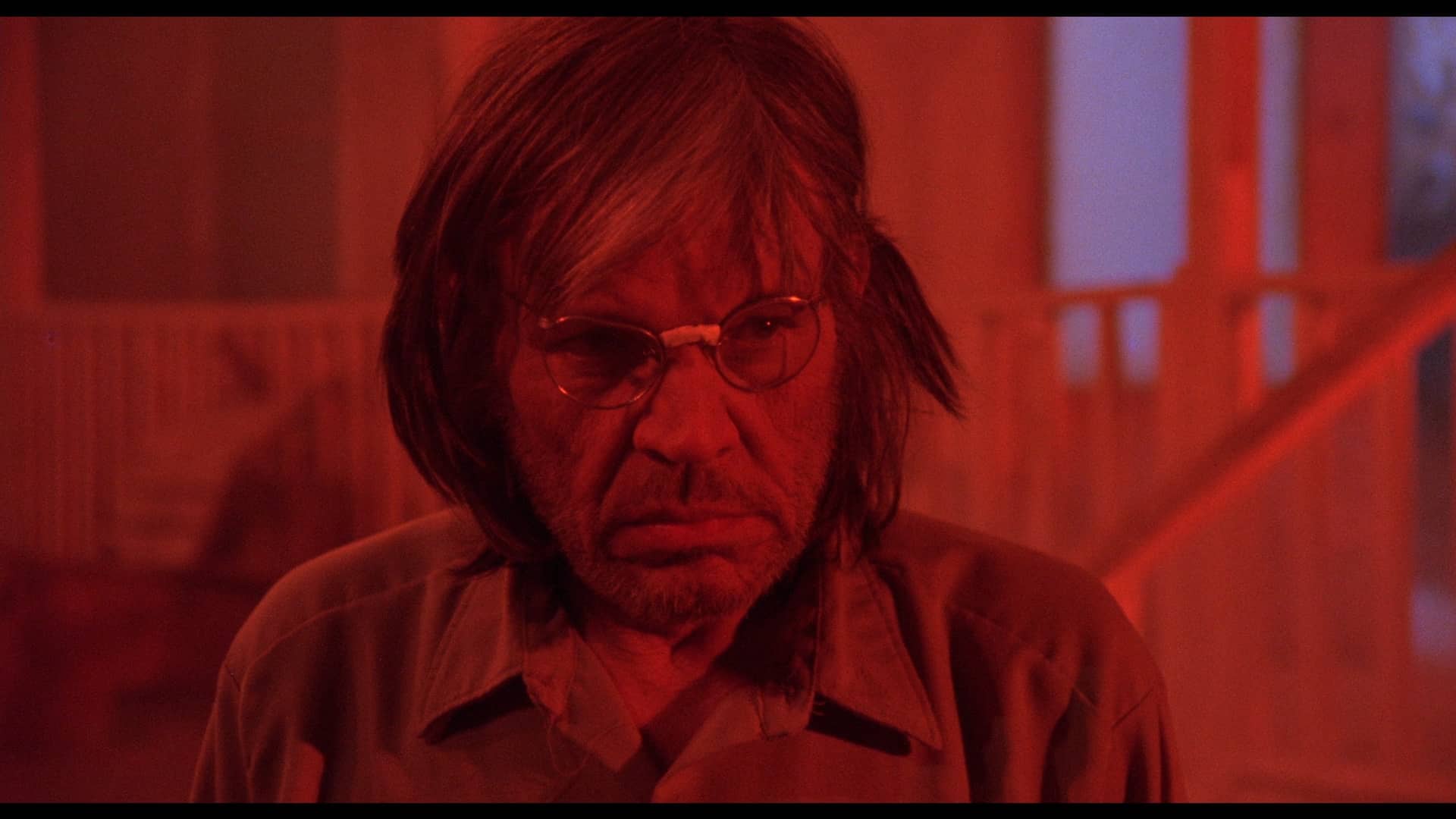 The movie was shot completely on sound stages and kind of feels like a studio-bound film; not that that’s a problem as it kind of enhances its all-round weirdness. Even the lighting is quite strange, with most of the film being lit by rather sickly red lighting.

The hotel manager, Judd, is extremely well-played by character actor Neville Brand, who was apparently quite a strange man anyway and unnerved a fair few of his fellow actors and also the crew. Brand was an ex-vet himself, and here he is playing someone who has lost in marbles primarily because of his experiences during a war, a situation director Hooper obviously thought that the actor could relate to. Apparently when his character had to slap the other cast members around a bit, he did so very much for real, and consequently managed to frighten and sometimes hurt the female cast members, in particular. His performance here is extraordinary, and the character of Judd comes across as someone who is always on the edge of ‘blowing up’ and becoming extremely dangerous.

In fact most of the characters in this film are a bit strange, especially the couple with the kid – their relationship is definitely one that should be getting professional therapy! They could easily be transferred to a David Lynch film and fit right in… 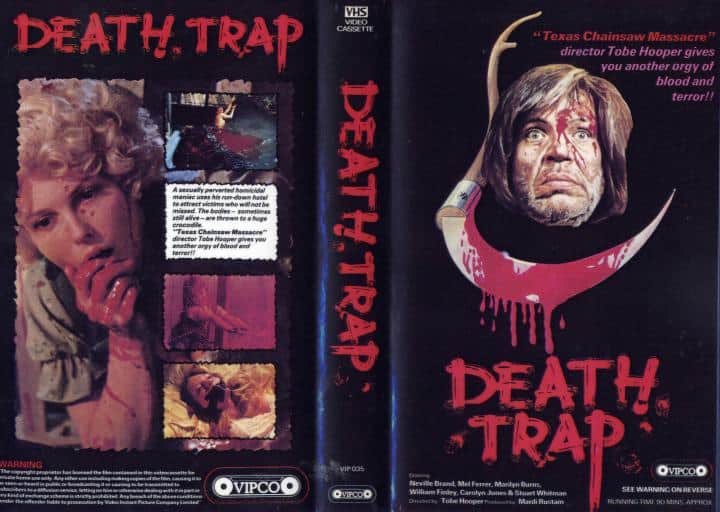 The other stand-out performance here is Robert Englund (A Nightmare on Elm Street), who always adds plenty of value to whatever film he’s in. Marilyn Burns too is pretty good as yet another damsel in distress, although her character here is a bit more three dimensional that most of that ilk.

Two things let Eaten Alive down. One is the rather pedestrian direction by Tobe Hooper, who kind of feels like he’s coasting a bit here. Secondly, it was obviously shot on a relatively small budget and this shows through, particularly in relation to the alligator, which is obviously made of rubber, even though Hooper wisely keeps its screen time down to a minimum and tries to disguise its inadequacies as best he can. Apparently they had issues with the alligator model swelling in size over time as it soaked up more and more water from the water tank that it was in.

Summing up Eaten Alive is kind of like a sleazy, violent version of Faulty Towers, where the hotel owner is demented in a very grim, sometimes funny, way! As with that classic English comedy series, it’s a wonder that anyone in their right mind would actually want to stay at Judd’s hotel in the first place…

Arrow Video is distributing Eaten Alive on Blue-Ray and on DVD. As with most of Arrow Video’s releases there are a plethora of extras to accompany the film, including a load of interviews with the likes of Tobe Hooper (14 mins), Janus Blythe (12 mins), Robert Englund (15 mins), and Marilyn Burns (5 mins). There’s also an archive interview with Tobe Hooper (20 mins). All are quite interesting and certainly worth a watch.

There’s also a featurette called ‘The Butcher of Elmendorf (23 mins), which is about the life of the South Texas bar owner that the film is reputedly loosely based on. Bar owner Joe apparently had six alligators in his yard and fed his wife (and more people besides) to them! 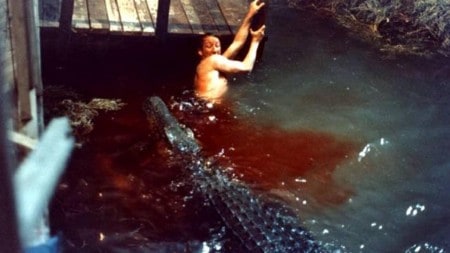 There are also several film trailers, including the Japanese trailer for the film, which titles it as ‘The Devil’s Swamp’. Additionally there’s four radio spots, an alternative credits sequence, plenty of behind the scenes stills (63), and some audience comment cards, one of which just says: ‘Burn it’! And finally there’s an audio commentary by script writer Mardi Rustam.