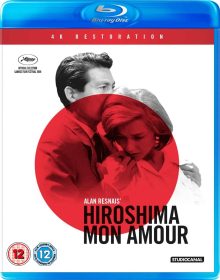 My hit and miss relationship with French cinema (particularly the New Wave) has left a lot of gaps in my knowledge of the country’s filmic output. One of the major titles that had passed me by, which is often cited as one of the greatest films of all time (it just missed out of the top 10 in Sight and Sound’s greatest films lists in ’62 and ’72), is Alain Resnais’ Hiroshima Mon Amour. Given its reputation I didn’t hesitate to request a screener when one was offered, but my occasional dislike of the French style made me approach the film with caution.

Hiroshima Mon Amour is quite sparse in terms of up front narrative. An unnamed (although IMDB calls her Elle) French actress (Emmanuelle Riva) is having an affair with a Japanese architect (Lui on IMDB, played by Eiji Okada) whilst shooting an anti-war film in Hiroshima. Her time there is limited, but Lui is desperate for her to stay and the two spend the day or so they have together discussing the war and delving into Riva’s tragic past of lost love and the ensuing mental suffering. We visit these memories through brief flashbacks throughout the film.

I was a bit torn in my feelings about this. The first 15 minutes are made up of a montage of footage of Hiroshima around the time of the bombing and the present day (late ’50’s) whilst the two leads muse about the war. Elle describes things she’s seen and Lui keeps saying that she’s “seen nothing”. This is the sort of poetically philosophical dialogue that has turned me off many French films in the past, so the film didn’t set off on the right foot for me. However, I found Resnais’ shots of Hiroshima (some of the footage in this sequence is stock from the war) particularly striking which kept me on board and the subject matter interested me (I’ve always found the idea of nuclear weapons terrifying and don’t feel the bombing of Hiroshima is discussed enough in the West). 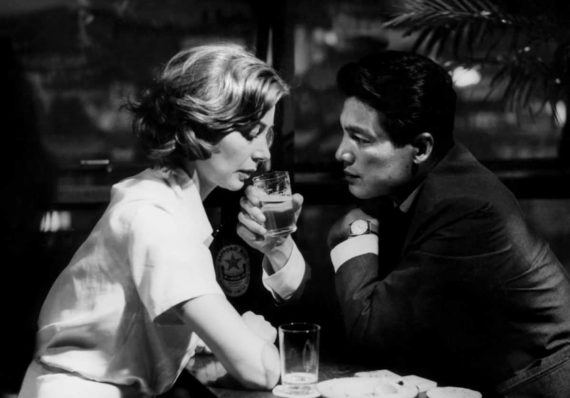 As I got further into the film, the talky, philosophical style continued so I remained hesitant to fall in love with it, but it was clear that there was great artistry on display. Not only does it look gorgeous with its sumptuous monochrome photography and controlled framing, but the performances are excellent, the music is beautiful and the use of flashbacks to create a non-linear storyline is masterfully handled in an era when it had rarely ever been attempted.

I gradually did get interested in the content of the film too though. I worried the couple’s dialogue would meander into various ruminations on love, but it stays quite focussed. The main theme is memory; its pitfalls, joys and necessity. Many facets of memory are explored – for example the need to remember what happened in Hiroshima, the fear of losing important but fleeting memories and the inability to forget difficult ones. Elle even worries about cheating on her first love’s memory and her reluctance to stay in Hiroshima seems largely due to a fear of forming new memories she knows she will lose.

This clear focus on a theme that has varied depths to explore meant that, although the style wasn’t for me, I still found much to mine from the film. It doesn’t feel as pretentiously cryptic or rambling as I find many of the New Wave titles. Resnais and writer Marguerite Duras aren’t just freewheeling. They know exactly what they’re doing. Hiroshima Mon Amour is considered part of the ‘left bank’ movement, associated with, but not quite fully described as being from, the French New Wave. The Left Bank filmmakers, to quote Wikipedia (sorry!), “tended to see cinema akin to other arts, such as literature”, and Hiroshima Mon Amour shows this through its more measured and beautiful style, where the films from the ‘right bank’ group (François Truffaut, Jean-Luc Godard etc.) tended to be more blatantly modern in their presentation and influenced by other films. 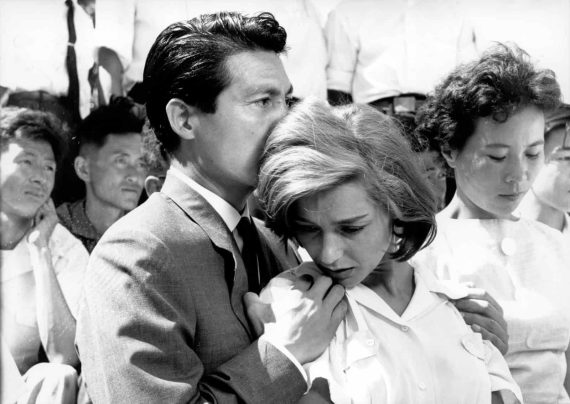 That’s not to say Resnais didn’t push the boundaries though. Elle’s past presents itself as a fractured narrative, told through flashbacks that are narrated in occasionally shifted perspectives. At one point Elle starts to talk as though she is in the past describing events as they happen and Lui becomes her German lover at the time. This portion of the film reminded me of Certified Copy, a much more modern film that plays with perspectives and memories in a similar way.

Through its unusual structure and minimalist, dialogue-heavy, philosophical presentation, the film is an oblique but quietly powerful war film unlike any other. Its style may not suit my tastes, but I can’t deny that it’s masterfully made and I wouldn’t argue with the vast number of critics that rate it as highly as they do.

Hiroshima Mon Amour is out on 18th January in the UK on Blu-Ray, released by Studiocanal. The picture and audio quality is exceptional.

For special features you get ‘Emmanuelle Riva remembers Hiroshima’ and a featurette on the film’s restoration. These are both strong. Riva gives a fairly deep insight into the production process in her 13 minute interview as well as giving her thoughts on the film itself. The restoration featurette is a lot better than expected. These types of features can often be a bit dull and throwaway, but this 11 minute interview with the two leads on the restoration takes a detailed look at the process and how much thought was put into keeping the look as close to what Alain Resnais intended as possible.