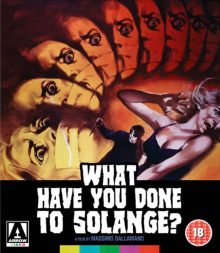 I’m not hugely knowledgable about the giallo subgenre (in a nutshell – Italian murder mystery thrillers), but I’ve been slowly working my way through some of the more famous titles over the last few years. I usually quite enjoy them, being a fan of thrillers in general and a great appreciator of stylish cinematic technique (which the subgenre often displays). However, I rarely find them perfect, with either style over substance coming into play or the complex plots getting tangled in a mess of red herrings and side-stories. The infamously ropey Italian ADR (or dubbing) can be a turn off too. So I approached What Have You Done to Solange? (a.k.a. Cosa avete fatto a Solange? or Terror in the Woods) with a little apprehension, but enough interest to have me take up the offer of a screener.

The film sees students picked off one by one at an all girls school in London. The crimes seem to be sexually motivated, with death coming from a knife through the victims’ genitalia. The first of the murders is briefly glimpsed by Elizabeth (Cristina Galbó), a fellow student. However, she didn’t quite see the killer and at the time she was cavorting with one of her teachers, Enrico (Fabio Testi), who doesn’t want her to tell anyone about it, in fear of losing his job and reputation (she’s just about old enough for him to avoid arrest). The leading inspector (Joachim Fuchsberger) cottons on to their relationship soon though and tries his best to get Enrico to talk. When Elizabeth herself is killed half way through the film, Enrico then becomes the prime suspect. He’s cleared, but becomes fixed on solving the mystery himself, teaming up with his semi-estranged wife Herta (Karin Baal) who takes solace in the fact that Elizabeth died a virgin. Together they unravel a disturbing plot involving sex and dark secrets.

What Have You Done to Solange? is a fairly typical giallo on paper, but I found it a touch different to its contemporaries. For one, it isn’t as boldly stylish as many of them. That’s not to say it doesn’t look good though. DOP Aristide Massaccesi (a.k.a. Joe D’Amato) and director Massimo Dallamano (who was the DOP on A Fistful of Dollars and For a Few Dollars More) craft a classily well shot film. It doesn’t have the theatrical use of primary coloured lighting or elaborate camera angles/movements (other than in one or two moments) that many giallo revel in. Instead it uses thoughtful framing and composition alongside some attractive fairly natural lighting. There’s a great cut in the film too where we go from an x-ray of a knife in the abdomen of one of the victims to what we think is the reaction of the victim’s father. It is revealed however to be his face during the funeral held later, expertly showing how the image will haunt him forever.

What Have You Done to Solange? is maybe too beautiful-looking to call gritty, but it’s shot more naturally than a lot of giallo and the grim and controversial subject matter help knock the sheen off. Yes, all giallo are filled with sex and death, but in looking at the fates of schoolgirls (albeit ones just about at the age of consent) as well as suggesting the murderer is a priest, the film seems a shade darker than most and is all the better for it.

The film doesn’t seem quite as exploitative as usual either. Yes there’s an awful lot of flesh on display (did we need those two shower scenes?) and the young girls are certainly sexualised and fetishised by the camera, but for the most part this seems to fit the narrative. The violence is less overtly stylised too. The murders and a grim abortion sequence are disturbingly intense rather than drawn out and suspenseful, making for an all together more uncomfortable experience. With all the sexual content it still feels seedy, but at least that sensation feels justified.

I also thought the plotting was more effective than in some of the other giallo I’ve seen. It never gets overly complicated and managed to blindside me with some red herrings early on. I was convinced that Herta was the killer for about three quarters of the film before I discovered there were more sinister things in play than mere jealousy. The way the inspector figures everything out and relays it in the abrupt final moments was a bit rushed and a little hard to swallow though.

I’ve praised the film very highly here so far, but I still wouldn’t give it full marks so I haven’t quite found my ‘perfect’ giallo yet. The sleaziness, however it fits the subject matter, still makes it a bit of a grubby watch and the first half dragged a little compared to the second where the plot thickens at a more exponential rate. It remains a very strong entry in the subgenre though. Many of its contemporaries purely succeed on the style of their set pieces, but this proves disturbing and classily produced enough elsewhere to work impressively as a whole.

What Have You Done to Solange? is out now on dual format Blu-Ray and DVD in the UK, released by Arrow Video. I saw the Blu-Ray version and, as is to be expected from the label, the picture and audio quality is excellent. You get both the Italian and English versions of the film, which is important for Italian releases from the period as they were sometimes made with the English language in mind for international audiences and often featured British/American stars. That said, I watched the Italian version for my review as it seemed the more natural fit even if the film is set in London.

You get an impressive batch of special features too. Here’s the full list:

– Brand new audio commentary with critics Alan Jones and Kim Newman
– What Have You Done to Decency? A conversation with Karin Baal the actress shares her thoughts on Dallamano s classic giallo in this brand new interview
– First Action Hero a newly-edited 2006 interview with actor and former stuntman Fabio Testi, including a look at his role in Solange
– Old-School Producer a newly-edited 2006 interview with producer Fulvio Lucisano
– Innocence Lost: Solange and the Schoolgirls in Peril Trilogy a brand new visual essay by Michael Mackenzie, exploring the themes of Solange and its two semi-sequels
– Original theatrical trailer

I haven’t had chance to look at all of these yet, but I saw the ‘Innocence Lost’ visual essay which was great. Rich with informed analysis and behind the scenes information, it’s a fine companion to the film. It’s filled with clips from various giallo too, which makes it a must see for fans of the genre.