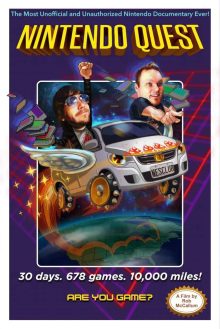 “In this all-encompassing documentary on Nintendo, gaming enthusiast Jay Bartlett hits the open road with best friend Rob McCallum in hopes of buying the 678 official retail-licensed Nintendo games for the Nintendo Entertainment System (1985) in 30 days with no online purchases. Along the way Jay and Rob will discuss Nintendo history, landmark games, box art, music, graphics, game play and more.”

Jay Bartlett, a self-confessed Foo Fighters, Star Wars and Nintendo maniac, is given a quest to start afresh and gain God-like status by collecting every official NES retail title, six hundred and seventy-eight of them. Extra impetus to the difficulty, and expense, of the task at hand is exerted in the form of refusal of any online help. All purchases must be old-school, from retail outlets and second-hand stores dealing in those appropriate goods. In doing so, Nintendo Quest turns itself into a buddy road movie/documentary that at times feels touching, and at others a delightful look into the mindset of the masses of collector’s out there. 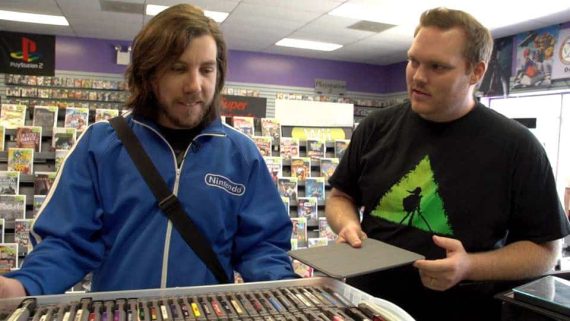 I’ll confess, I’m not a collector, I just don’t have that mentality. I find most collectibles to be clutter and would never consider holding onto something for sentimentality’s sake. There are no Amiibo‘s in my house. My entire history with Nintendo, from NES through to present day, has been sold on to fund the next new Nintendo console, in fact I find myself buying more and more titles digitally. Now, I’m not blind to the collecting bug, I have close friends who are prone to said tendencies, and will spend entire monthly wage packets to extend their collection’s profile, and “getting where they want their collection to be.” What Nintendo Quest offers is a window into the world of collecting and the emotions that are confronted on a weekly/daily basis by all the avid collector’s out there. To buy or not to buy that is the question.

All titles, sound, and incidental artwork are suitably retro 8-bit fitting the theme of the documentary. Jay’s collection progress is highlighted through on-screen 8-bit representations of the collected cartridges and his remaining funds. 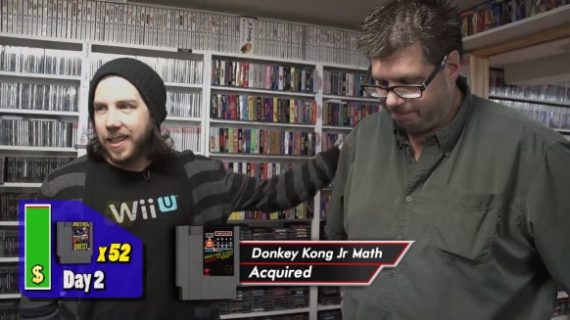 However, well produced, edited and written a documentary is, it can all unravel with the actor’s involvement and the viewer’s ability to empathise with the main protagonists. Rob McCallum provides voice overs and appearances throughout the 92 minute documentary and is likeable enough. Jay Bartlett, however, the main focus and the collector throughout the story, is instantly a draw, a thoroughly nice guy with predilections to anxiety, but rooted in North American rock and geek culture of the 90s and onward. Jay’s back-story given throughout the documentary tells us who he is and how he got to where he is today. He famously describes his deceased father as “…the worst person I’ve ever met in my life…a tyrant.” Racked with guilt one minute for over spending on a single cartridge, and then elated the next because of a bargain and a meeting with a fellow enthusiast that moves him. There’s a lot of North American motivational talking about achieving your dreams in the first 8 minutes that slightly over-eggs it, but this is rarely repeated throughout the remainder of the documentary. Mostly it’s enjoyable to see how Jay develops haggling skills that bold well for future purchases, and knows when to say no and walk away after larger retail stores won‘t budge on their asking price. 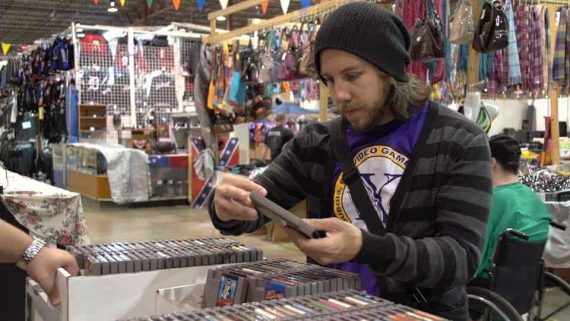 Now, the 92 minute playtime may have become insatiably boring if only covering the main road trip collection theme, however entertaining it was to watch Jay as he wades through storage boxes of old NES cartridges, and being disappointed or overjoyed at his discoveries. The editors of Nintendo Quest deserve a hefty pat on their back for the way that each section of time-based collectathon is interspersed with Nintendo-related histories, stories, and interviews. From their 2 minute Nintendo History, 1889 to 1985, to their interviews with industry experts and ex-Nintendo employees, a lot is covered here. Call of Duty designer, James Portnow, talks of imagination in games of the NES era due to the lack of photorealism at the time, visiting Syd Bolton’s 15,000 game ‘The PC library’, Tommy Tallarico enthuses about the 3 channel audio and the inventiveness of Nintendo’s sound engineers, the discussion of the 1990 Nintendo World Championships (NWC 1990), box art illustrator Marc Eriksen on the infamous Mega Man 2 cover, and who can forget the utter joy at seeing a quick run-through of numerous 30-40 year old interviewees singing the Mario Over-World Theme in full gusto. The whole documentary is well-structured between each interval and leaves you wanting more.

Humour is present, but only a few times, but enough to be pleasing with self-defacing sarcasm. A key moment is when a rival collector, J.D. Lowe, is set-up as the evil nemesis of Jay, replicating those good versus evil moments of all well remembered NES titles.

An intriguing and, mostly, thoughtful, if somewhat lacking look at a collector’s thought process interspersed with Nintendo related histories. Memorable due to its looking-glass nature of struggling with budgets and morality of material acquisition at what cost. So, will Jay be able to collect all 678 NES cartridges and come in under budget? Intrigued? Give Nintendo Quest, a family friendly watch, your time to find out.