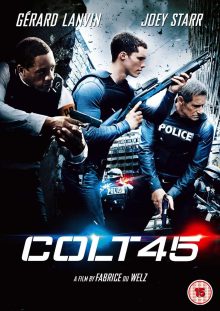 The director of Vinyan and, shudder, Calvaire dials back the weird but not the bleakness and violence for tough French cop film Colt 45. Short and sharp, much like the copious bullet ballets on display, Du Welz’s film hits hard as it charts the plight of a young police marksman whose skills with a gun lead him down a dark path as he is constantly pushed and pulled by several superior officers to become the killer he instinctively is. When the young man’s skills force him to kill he becomes entangled in corruption and deceit that’s leads to more and more deaths no matter how hard he tries to extract himself from the situation.

At once gritty and often bleak with regular bursts of bullet-riddled action, Colt 45 sees Du Welz confidently switching to the crime genre and delivering another dark tale. Rather than a preachy diatribe on the evil’s of guns and the need for gun control the film respects the skill and power that comes with being a gifted gunman but never resorts to cool posing or gun fetish action fantasy. The characters know their weapons and ammo and use them for their jobs and in many cases to save their lives. The expertise the main character has with a gun (seen in a brilliantly staged scene early in the film when he takes part in a shooting competition) brings him to the attention of nefarious sorts who want to turn him into a killing machine. Rather than do that and be turned into some badass action hero type he constantly tries to avoid becoming a killer but can’t seem to outrun this destiny: a destiny the makers may seem to be suggesting comes with knowing and using guns so well. It’s an interesting take for a film with lots of gun action and gives the protagonist a refreshing moral journey to navigate. 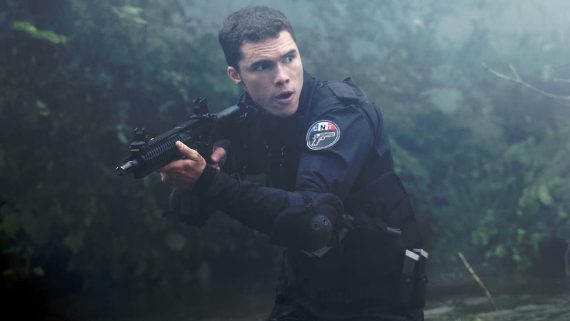 Still, Du Welz and his crew know when to pull back from being too po-faced and deliver some good old cops and robbers entertainment. Colt 45 serves up the gritty cop goods and while it dips into melodrama now and again (swaying from cool hard grit to pulpy action shenanigans on occasion) the film is grounded by Ymanol Perset’s intense lead performance. He’s incredibly believable as an expert sharpshooter and as a troubled but good soul who finds himself rapidly being pulled towards the role of a killer. Perset makes one feel for his character even when he does the wrong thing and when his arc reaches its final, and inevitable, decision teetering conclusion one feels like they have been on a suitably dark ride.

On top of this there are the expertly staged gun battles: short and sharp, the gun action is fast and violent. Don’t expect sustained scenes of action, as they are often over quite quick but this brings a realistic edge to them. There is no posing or a crappy overused CGI shot of following a bullet as it travels through the air to its intended victim (ugh!). Du Welz brings brutality to his action scenes and they are all fluidly shot and edited so we can see what happens. However, if you are one that has an aversion for people being violently shot in the head at point blank range, then you may want to stay clear of this!

The pacing isn’t always consistent, the plot gets a little jumbled (apparent studio interference is the cause for this and the short 80 minute runtime) and if you are one who leans more to Du Welz’s arty impulses such as the aforementioned Calvaire and Allelulia, then one may be irked that he has gone the more traditional cop/crime route. However, Colt 45 shows Du Welz is comfortable in other genres, has not lost his dark edge and that he can deliver a brutal and fast paced cop thriller with style.