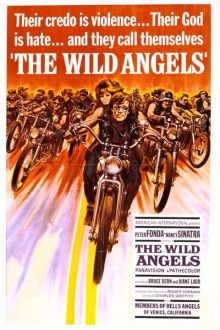 “We wanna be free, to do what we wanna do..”, began Primal Scream’s 1990’s hit ‘Loaded’. The original quote comes from Peter Fonda’s character, ‘Blues’; the ‘president’ of a Hell’s Angels gang in the 1966 classic, Wild Angels. Credited as inspiring the movie, Easy Rider, which also saw Peter Fonda in a lead role, Wild Angels is also said to have kick-started the whole biker / road movie genre.

Alongside classic B-movie science fiction cinema like ‘Attack of the Crab Monsters’, and his well received horror classics (and Vincent Price vehicles), ‘The Masque of the Red Death’ and ‘The Pit and the Pendulum’, both based on the stories by Edgar Allen Poe, director Roger Corman also turned his hand to other popular genres such as the westerns ‘Five guns west’ and ‘Gunslinger’. A decade later he would try his hand at this great road movie.

It’s quite a simple yet effective story. Gang member, The Loser (Bruce Dern), has had his motorcycle stolen. Believing that a rival Mexican gang are responsible, Blues and his gang head out to Mecca, California, to beat up the Mexicans. But when the police intervene, The Loser steals one of their bikes and is promptly chased and shot.

Back at a party spot in the woods where gang members drink, ‘make-out’ with their women, and impress with feats such as motorbike jousting with palm tree branches, they fear that The Loser must be in trouble as he hasn’t rejoined them, and subsequently find out that he has been wounded and taken to hospital.

A plan is hatched to break him out, which doesn’t go very well, especially when one gang member gets carried away and commits a sexual assault on one of the nurses. Back at the gang’s den, The Loser, obviously much more critically ill than they imagined, very quickly deteriorates and dies. This really affects the already guilt-wracked, Blues. Adding to his dilemma, the nurse identifies Blues to the police as her attacker – he’s the only one of the gang she actually saw during the break-in at the hospital.

A funeral for The Loser quickly turns sour in probably the most extreme section of the movie. Blues, frustrated with life, the death of his friend, and the way he feels his gang are treated by society, responds in anger when the Preacher proclaims ‘we are all Gods children’, by announcing ‘not children of God, but Hell’s Angels!’. He then launches into his oft sampled speech about ‘getting loaded’ and ‘we wanna be free to ride our machines without getting hassled by the man’. The whole church is then turned upside down for a party frenzy; the Preacher attacked and poor old Bruce Dern dragged out of his coffin to sit upright at the front of the church, cigarette in mouth, as if watching his own funeral.

The Loser’s girlfriend is sexually assaulted and raped while he’s out of the picture; and while we don’t really see anything happen, it’s enough to make the viewer feel uncomfortable seeing her drugged and then pounced upon by two of the gang, with other members drunkenly advancing to take turns.

The eventual burial of The Loser turns sour when a group of local youths arrive, throwing rocks at the gang. As the police draw in with sirens blaring, and the Hell’s Angels flee, it’s up to Blues, uttering ‘there’s nowhere left to run’, to remain as a solitary figure, filling in the grave of his friend with a shovel while he awaits his inevitable arrest.

One thing that particularly stood out to me was the portrayal of the gang, which is actually made up of several members of a real Hell’s Angels gang of the time, based in Venice, California. We’ve become accustomed to seeing biker gangsbased on very much a 1970’s blueprint; with long hair, big beards, tattoos and a penchant for heavy rock. This late 60’s incarnation sits slightly at odds with that. These are just mean men; blue-collar workers covered in oil and grease, hard drinking and smoking – hard living. They’re accompanied by their women who frequently dance in a very 1960’s style to the rhythm of a set of bongo drums that the gang carry about. It is the women more than the men perhaps that anchor this movie in the 60’s rather than the 70’s with their style.

Nancy Sinatra is cast well as Blues girlfriend, and as the tall handsome Peter Fonda stands out amongst the other men in the movie in the lead role, so Nancy Sinatra is very striking as his partner; their turbulent on-off relationship (on Blues part) marrying up nicely to the unrest Blues seems to feel inside during the movie, about life, the death of his friend, being at odds with ‘the man’. Perhaps this conveys the feel of unrest that would have been prevalent in the America of the time; the Vietnam war, the end of the flower power era and the dawning of a new age at loggerheads with the old values and ideals.

This is generally a well shot, well acted film. There are some great open-road sequences set against a pumping instrumental 60’s fuzz-rock soundtrack. The use of the German iron cross and swastika symbols as antagonistic, anti ‘the man’ emblems, emblazoned on walls, on clothing, on the bed-spread that The Loser dies on, as well as the drape over his coffin, are particularly striking and effective.

Overall this is a great, gritty biker story with a dark undertone that, at just 90mins, drags you into the biker world for a brief no-holds-barred encounter before speeding off, engines revving, into the night!

Note: There were no additional extras on those review copy disc