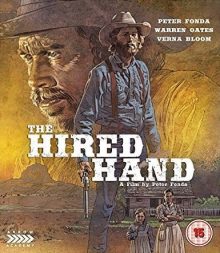 Any regular readers will know I’m a big western fan and may or may not know I’ve got a soft spot for 70’s American cinema too. So when I was asked if I’d like to review Peter Fonda’s 1971 western The Hired Hand I didn’t have to think twice, even though I’d never heard of the film before being handed the press release.

In the film, Harry (Fonda himself), his friend Arch (Warren Oates) and a young man are cowboys roaming from town to town. Upon reaching a dead end town, his associates decide to move on to the California coast, but Harry, fed up of the nomad life, decides to head back home to his estranged wife and child. Arch, who’s been travelling with Harry for several years, at first decides to let his friend go alone, but when their young companion is ‘accidentally’ killed by a man named McVey (Severn Darden), he decides to go with him. Once there, Harry’s wife Hannah (Verna Bloom) isn’t too happy to see him though. It’s been many years and she’d assumed he was dead and told their daughter as much. Harry talks her into letting him stay as a hired hand on the farm though, with a hope of reconciliation over time. When he finds out Hannah has been sleeping with the hired help whilst he’s been away though, the relationship becomes even more strained. This and the spectre of the cowboy life hanging over Harry, not helped by Arch’s presence, cause a slow and uncertain path to rebuilding his family.

As this brief synopsis shows, The Hired Hand isn’t your typical western. It’s one of the revisionist or anti-westerns that began to emerge in the 60’s. They sought to steer away from the stereotypes of the classic westerns and deconstruct the myths of the wild west. The Hired Hand shows the cowboy lifestyle to be an unglamorously dangerous, lonely and miserable existence; with poor food, little comfort at night and far too much time spent unwelcome in tiny, middle of nowhere towns. Harry’s young companion for instance, who is full of enthusiasm for his travels to the coast, comes to a grisly, unromantic end for little to no reason (though we never quite find out the truth behind it). 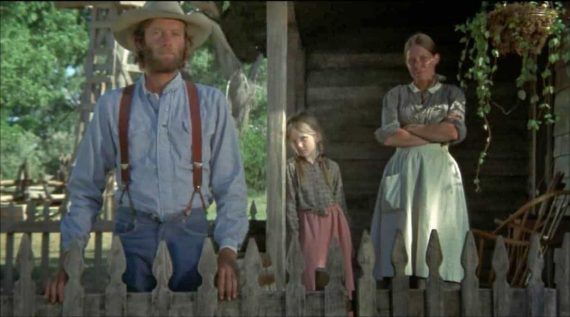 Instead of the usual good versus evil plot or perilous journey to undertake, the film is about one man attempting to make up for the mistake of leaving his family behind for a life which seemed filled with promise as a youngster, but ended up being unfulfilling. It’s a quiet, slow moving and melancholic film. There are western tropes here, particularly in the opening and closing acts, but on the whole this takes a refreshingly original spin on western mythology.

I didn’t find the content wholly satisfying though. The infidelity of Hannah felt a little overplayed, with the film putting more emphasis on this than on Harry’s failings and attempts to make up for them, which personally I’d have found more interesting. This is quite a minor personal preference issue more than poor writing though. I still found the film utterly engrossing.

Part of what kept me hooked was the film’s unique style. Incredibly long dissolves and multiple exposure effects are frequently used, giving a dreamlike quality to the film. This is further enhanced by the beautiful cinematography by the great Vilmos Zsigmond (The Deer Hunter, Close Encounters of the Third Kind, Deliverance, Heaven’s Gate etc…) which makes good use of the sun, with some effective lens flares. The rootsy score by Bruce Langhorne is wonderfully elegant too and perfectly suited to the mood of the film. I added the album to my music library as soon as the film finished.

Add to this a first rate cast (Warren Oates should be better known – he’s one of the finest character actors of the 60’s and 70’s) and you’re on to a winner. I wasn’t totally sold on the central drama as mentioned previously, but it’s still a unique, quietly intoxicating and poignant inversion of the typical western. It might be a bit too 70’s for some in its style, but it was perfect for my tastes. 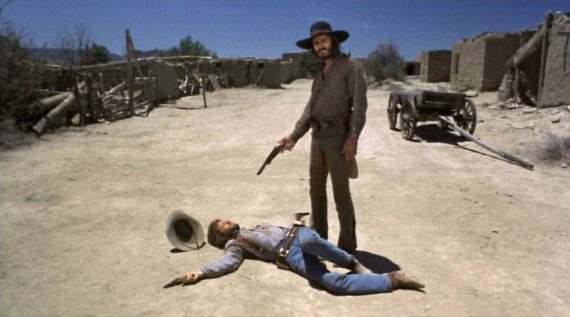 The Hired Hand is out on 21st November on dual format Blu-Ray and DVD in the UK, released by Arrow Academy. I saw the Blu-Ray version and the picture and sound quality was excellent. The grain is fairly heavy, but looks as it should and the picture is otherwise fairly sharp and clean. The audio is very good too, with the beautiful score coming through a treat.

This all equates to around 5 hours of material which is incredible for such a relatively little-known film. Arrow should be applauded for the immense effort put in here. I must admit I haven’t had the time to work through it all though before writing this review, but I’ll try and get to it shortly and update my writeup.