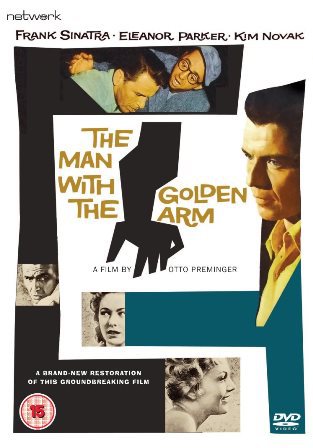 Otto Preminger is a director who I’ve always had a hard time loving. That’s not to say I dislike his work either but Preminger’s films always leave me feeling a little unsatisfied for reasons that it’s hard to put my finger on. Unlike the best directors of his era, Preminger seems to lack an emphatic stamp. I could easily watch one of his films and not realise it was directed by him. This also speaks of a commendable diversity though, and Preminger has shown that he can turn his hand effectively, if not masterfully, to many different genres. Likewise, Frank Sinatra is an actor by whom I’ve never been entirely convinced but who frequently does a more than satisfactory job and displays an ability to slot himself into a variety of genres and roles from musical comedy to gritty drama and from brave hero to gun-toting bad guy. Sinatra’s ambition to be a serious actor often exceeds the talent he displays however, so the prospect of seeing him take on the role of a drug addict in a film by a director I’m not overly fond of may have seemed like an unpromising invitation.

Probably the genre most associated with Preminger is film noir, with his best and most celebrated work Laura falling under that category, and The Man With the Golden Arm borrows certain elements from the noir thriller. This is the story of Frankie Machine (yes, Machine!), a heroin addict who formerly made his money as the dealer in illegal card games arranged by local gangster Schweifka. During his time in prison Frankie has got clean and taken up drumming and as the film opens we find him returning to his Chicago neighbourhood free from drugs and looking for a job with a band. He quickly gets an audition but he faces opposition in the form of Schweifka, who wants to retain Frankie as his dealer, Louis, a drug-dealer who wants to get him back on heroin, and his own wife Zosh, a wheelchair-bound neurotic who has a tenuous hold on Frankie by way of his guilt over the car crash that caused her paralysis. Zosh’s manipulative behaviour (she can, in fact, walk and does so when there is no-one else in the room) and Frankie’s inability to shake off Schweifka’s influence over him soon drive him back into the illegal card games, the heroin addiction and the arms of old flame Molly. 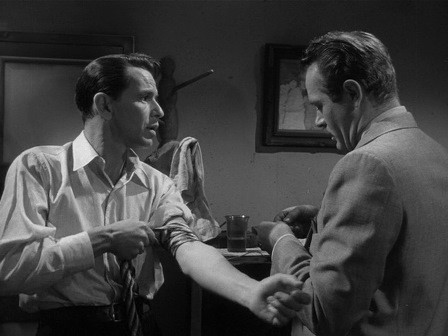 The Man With the Golden Arm is certainly a film with a great deal of flaws but ultimately I was impressed and entertained, with most of my qualms being quashed by sheer enjoyment of this tight little tale. The story is set entirely in a very small neighbourhood with only a few recurring locations but Preminger makes the most of this claustrophobia as an influence on Frankie’s desperation for some kind of release. Everywhere he goes, Frankie is trapped by something. Even in his own home his nails-on-a-chalkboard wife is constantly driving him crazy, playing on his guilt while hiding the fact that she has actually fully recovered and can walk. This secret, like the heroin addiction, is one of several plot strands that we know must come to a dramatic head at some point and Preminger does a good job of presenting them to us individually and then yanking them altogether. The relentlessness of Frankie’s turmoil is what gives the film its notable energy, along with the driving jazz score that constantly (and, it must be said, somewhat irritatingly) pulsates under every scene.

The Man With the Golden Arm has the dubious honour of being most famous for its opening credits. While the film does retain some renown for Preminger’s insistence on tackling the then taboo theme of drug addiction in a mature and unflinching manner, the most famous moments on screen are actually the work of Saul Bass, the legendary graphic designer whose striking title sequences and poster art have become some of the most iconic images in cinema history. His work on The Man With the Golden Arm is particularly brilliant, with a snaking, jagged silhouette of an arm breaking into pieces alongside Elmer Bernstein’s equally famous title music. It makes for an arresting opening which threatens to overshadow the film. Fortunately Preminger stages the opening scenes in a pacey manner, giving us lots of information and introducing us to all the key players in the first half hour. Sinatra, too, is on good form, particularly in the film’s more subtle scenes. In the big set pieces, such as when he’s asked to portray the effects of cold turkey, Sinatra overdoes it a tad. It is probably these scenes that won him his Oscar nomination for this role (he ultimately lost to Ernest Borgnine in Marty) but Sinatra is infinitely more effective in the contemplative moments that lead up to these crescendos. His large, sorrowful eyes say more than flailing histrionics ever could. 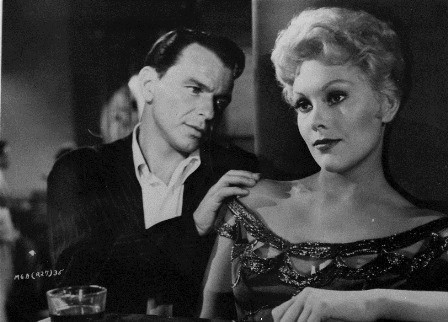 MAN WITH THE GOLDEN ARM

One of The Man With the Golden Arm’s major flaws is the acting of most of the cast, although their melodramatics do make for extremely entertaining viewing and have probably given me a greater affection for this unusual little film than less wild performances would have. Top acting honours undoubtedly go to Kim Novak, whose measured and dignified work as Molly creates the film’s most believable character and she makes an excellent foil for the on-form Sinatra, their central relationship providing the film’s emotional anchor. In stark contrast to Novak’s classy turn, Eleanor Parker chews more scenery than Godzilla in her role as Zosh. Zosh is supposed to be annoying, needy and melodramatic and parker certainly fulfils all these requirements but she just doesn’t know when to stop. Perhaps encouraged by her director, Parker amplifies every reaction into a wild-eyed gawp. She seems to have wandered in (or wheeled in, if there are any people around) from Whatever Happened to Baby Jane and brought bucketloads of that film’s Grand Guignol with her. If Preminger’s aim was to tackle his weighty theme as realistically as possible, Parker is his major problem. And yet, the scenes with Zosh are some of the most compelling in the film and these frequent descents into madness are probably what linger in the mind most insistently after the film ends. Likewise, Arnold Stang as Frankie’s clingy buddy Sparrow is like one of Top Cat’s gang made flesh and his cartoon clowning sticks out like a sore thumb but it adds colour to what could otherwise have been an overwhelmingly grim picture.

For all its flaws, The Man With the Golden Arm was a very important film for its progressive approach to the issue of drugs. Most films that even touched on the subject during this era offered a black and white lie about crazed dope fiends who were barely recognisable as human beings. Preminger was determined to show the grey area and it cost him the support of the Motion Picture Association of America, who refused to certify the film. Preminger had encountered similar problems two years earlier with his light comedy The Moon is Blue, which was refused a certificate due to what the MPAA perceived as too light a treatment of the subject of illicit sex. In both cases Preminger stuck to his guns, the films were released and the MPAA eventually backed down. This was instrumental in weakening their influence and ultimately crushing the restrictive production code by the following decade, freeing up cinema to explore previously closed avenues. 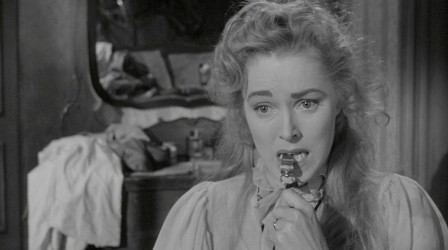 The Man With the Golden Arm is released by Network on DVD and Blu-ray on June 22nd 2015. An image gallery is included as an extra.