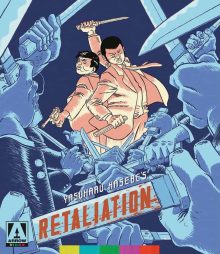 Hot on the heals of releasing Yasuharu Hasebe’s Massacre Gun on Blu-Ray last month (which I also reviewed), Arrow Video have polished up the director’s follow up, another violent gangster thriller, Retaliation. I enjoyed the previous film a lot, but couldn’t help comparing it to the superior work I’d seen from Seijun Suzuki. This time around is a similar story, although I was comparing it to Massacre Gun more than anything else.

Retaliation sees gang member Jiro (Akira Kobayashi) come out of prison after serving 8 years for killing a member of a rival gang. As soon as he sets foot outside the gates he’s approached by Hino (Jô Shishido), who vows to kill him to avenge the death of his brother (which was the cause of his incarceration). This first attempt is thwarted by his girlfriend, but Hino is still hellbent on carrying out his actions.

When Jiro gets home to his Godfather, he discovers that his once powerful gang has all but disbanded. The Don of another gang, the Hazama family, has been supporting his ageing leader though. The once rival Don offers Jiro a job, to gain control of Takagawa City for his family. In doing so, he would be able to run it as he likes. Seeing this as a way to make his own family name relevant again, Jiro accepts the offer and proceeds to play two rival gangs off against each other. Once rid of them he hopes to go legit and run a construction company in the area. However, as is often the case in these gang warfare films, nothing quite goes to plan and the bodies pile up and loyalties are tested.

In amongst all of this, Hino is forced to side with Jiro by his employers, but he vows to carry through his vengeance once the job is done. The two become closer as things go on though, so what will happen by the end?

Like with Massacre Gun, this doesn’t have the most original of plots and follows numerous gangster movie conventions. The double crossings, honour amongst thieves, failed attempts to go straight etc. are all there and the film has quite a convoluted story as many others do. However, this is all done rather well with plenty of violence and a keen visual style. 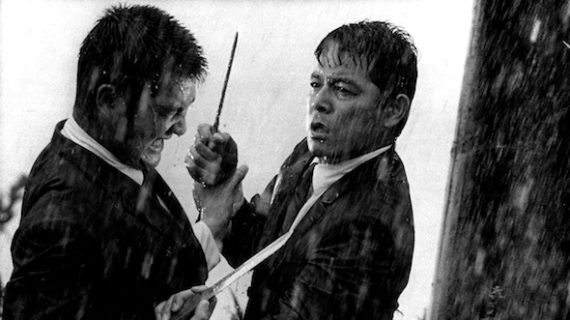 Shooting in colour this time around, Hasebe gives the film a different look to his previous effort. I wouldn’t say he makes amazing use of the change of format, but his compositions remain very interesting and diverse. He makes great use of depth in almost every frame and the action scenes are kept very kinetic with plenty of handheld camera work. This can be a bit rough from time to time, but gives the film energy. With more of an emphasis on knife fighting than before, the action is fast and vicious. The violence can get a bit too nasty for my tastes though as there are several unnecessary scenes of violence (largely sexual) against women.

A couple of set pieces really stand out. One assassination scene is made up of (almost) one long shot from a semi-first person perspective, shot only by flashlights. It’s intense, unique and quite frightening. A rain-drenched showdown towards the end is suitably dramatic too and the film’s finale is thrillingly blood drenched.

The performances are solid enough, with Kobayashi providing a strong lead. Shishido isn’t in the film as much as I’d have thought and hoped, but his character is the only one played for laughs so he’s very memorable. His lust for revenge is not taken too seriously and he regularly states that he’s only helping Jiro to speed up the gang war so he can kill him sooner.

All in all, the film isn’t really anything special. It lacks the class and quirkiness of some similar stronger films, but it’s trashily entertaining and grittily stylish nonetheless. The action is very well handled which makes it an exciting watch although it’s a little too nasty at times to be out and out fun. So I’d say it’s certainly recommended for fans of the genre, but others might want to check out some more respected titles first.

Retaliation is out on 11th May in the UK on dual format Blu-Ray & DVD, released by Arrow Video.

For special features you get a new interview with Jô Shishido, which is very honest and occasionally quite funny, and another with Tony Rayns who is always welcome in the special features section. Here he gives quite a lengthy (just over 30 mins) talk on the director, stars and genre. You also get the usual stills gallery, trailer and one of Arrow’s well compiled booklets.