Although born in Poland, Pawel Pawlikowski began his career making documentaries for British television, then made a name for himself directing a couple of highly regarded British films, Last Resort in 2000 and My Summer of Love in 2004. For his fifth feature, Ida, he chose to head back home to co-write and direct a film in Poland which delves into the country’s dark and turbulent past.

Ida is a drama set in the 1960’s which follows 18-year old Anna on a journey of self-discovery. An orphan who has lived in a convent for as long as she can remember, she is preparing to take her vows to become a nun and is advised to speak to her one known relative, her aunt Wanda (Agata Kulesza), before making this huge decision. Wanda opens Anna’s eyes to the truth of her past, revealing that she is in fact called Ida and her Jewish parents were killed during the Nazi occupation. Following this discovery, Anna/Ida travels with Wanda to try to find her parents’ bodies and finally lay them to rest. Along the way, Wanda, a bitter yet modern woman, tries to break out Anna’s repressed desires. Wanda herself is filled with pain though and the journey they take may cleanse her soul too.

I’ve been putting off reviewing this for almost a week now. This is because, for one, I was a little torn over how I truly felt about the film, but also because I don’t feel I truly understood it. The story is sparse and straightforward and Anna’s development as a character is generally clear, but I couldn’t quite connect the dots to grasp the overall message or theme which connected Anna’s family history with her current situation and coming of age. In writing this review, I feel like I might be unravelling some of its mysteries though. I think repression may be the key. Living as a nun for all of her adolescence, Anna has obviously been holding back her natural desires and teenage rebellion and the film spends much of the time dealing with this. Looking back, the side of the film which focuses on the Nazi occupation also deals with repression. Rather than any flashbacks or history lessons, the film examines how the persecution of Jews in the country affected those who survived and are forced to live on amongst their former persecutors. The horrific memories of that time are pushed to the back of their minds. It also looks at those that carried out the persecutions and how they’ve had to live with the guilt without means of channeling it. The film’s most powerful scene deals with this head on, but describing it would spoil things for those that haven’t watched the film. On the subject of spoilers, I wasn’t quite sure what to make of the film’s final conclusion either. 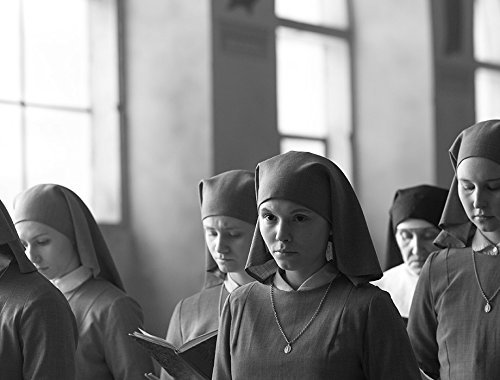 I don’t want to sound down on the film though. As I said, I was torn about my feelings towards it and as you can tell by the score I’ve given the film I did like it a lot. Where the film may have lost me from time to time due to its content, it more than made up for this through its craftsmanship. It’s a stunningly beautiful film. The black and white academy (4:3) ratio cinematography is striking to say the least and Pawlikowski’s control of mis-en-scene and framing is staggeringly good. From the instant you see the first few shots which place Anna and the other women at the convent at the bottom and corners of the frames, providing oppressive empty spaces (possibly filled with the power of God above them) you know you’re in the hands of someone with the utmost control over the medium. The sparse use of audio is beautifully controlled too and the editing is exceptional. Although the film is light on plot and dialogue, it is tightly cut and paced. Coming in at a lean 81 minutes, it certainly doesn’t outstay its welcome. I’ve always been a fan of economical filmmaking like this and more purveyors of subtle, quiet cinema should follow suit in my opinion.

Everything about Ida reeks of class and you’d be hard pressed to find a more carefully and effectively crafted film this year. Perhaps it was this beauty and perfection that distanced me though and prevented me from truly falling for the film. On top of my uncertainty over Pawlikowski’s intentions, I didn’t feel the film hit me on an emotional level as powerfully as I think it maybe should have. It doesn’t help that I’m not a religious person, but I sense that the intoxicating quality of the visuals distanced me from the heart and soul of the film. That said, the key scene I mentioned earlier did move me and there is a wonderfully haunting quality to everything. I guess that’s more the intention, rather than to pull at the heartstrings. This is a sombre and meditative film rather than a tearjerker, but I think I still expected more of a gut feeling than I got.

Once again I feel I’m sounding too negative though. I think the quality of the filmmaking astonished me so much, I was disappointed that it didn’t connect as powerfully in an emotional or spiritual way. Plus I think I’ve been using the writing of this review as a means to getting to grips with the film’s themes in my head, so I’ve been bashing around things that didn’t settle more than the successful elements.

All I can really suggest is to ignore my ramblings and see the film for yourself. It’s an incredible work of cinema, even if you have misgivings about certain aspects like myself.

Ida is out on Blu-Ray & DVD in the UK on 24th November, released by Artificial Eye. I watched the DVD version and the picture and sound quality were excellent. With the film looking and sounding so good, I would recommend going for the Blu-Ray version if you can though.

There are no special features included unfortunately (at least there weren’t any on my DVD), other than a trailer.