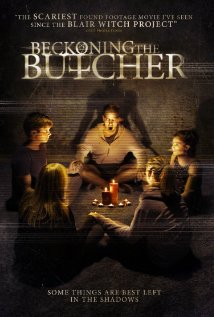 Monster Pictures unleash the nerve shredding Beckoning the Butcher on an unsuspecting world, this is found footage but it’s not Cannibal Holocaust, so you can relax a bit. Oh, not another shaky cam… I hear you groan, and that’s what I thought, but they manage to pull it off. The characters are engaging and you’ll delight as the annoying member of the party gets his comeuppance, sorry Brent (Tristan Barr). To add to the found footage feel there are interview flashes from Detective Marcus White (Peter Flaherty), Shannon the psychic (Janet Watson Kruse) and distressed brother David (Lliam Murphy), they set the scene and explain what’s going on. We soon get to meet the leader of the gang Chris (Damien E. Lipp) and his other devoted followers Tara (Stephanie Mauro), Nicole (Sophie Wright) and Lorraine (Tilly Legge).

Our interviewees describe the last known movements of the missing quintet, their ill-advised trip to a creepy house on a dim-witted mission to beckon the butcher. In this Australian found footage yarn, Chris likes to test out weird rituals he has found on the dark web, kicking off with a numb one involving a stabbed cuddly toy and some rice, which, hey, surprise, surprise, doesn’t work.

The wobbly cam cranks up and we get to see our brainless researchers set off to sojourn at the desolate freaky house, collecting salt and sage along the way, to use in their wacky ritual. On disembarking at the house of the diabolic, the five numbskulls sign up to be butchered and seal the deal with blood, Chris asks the Butcher to give him some awesome footage – he may want to cancel that wish. They burn their blood soaked signatures and chant in Latin to welcome the butcher, just about the worst thing they could do, these are the ideal ingredients for summoning the twisted and demonic.

Soon the fun and pranks do not seem to cover all the weird “shit” that starts to happen. Our first victim, Lorraine is doomed to become a puppet of the entity, maybe she has fallen in a bucket of sandpaper while staggering around in the dark, cos something nasty has happened to her face. The grating Brent is second to get it, all that’s left of this annoying thicket is a blood splattered room, there is a god. The remaining survivors only have a candle and a circle of salt to protect them, but they make the outstandingly senseless decision to leave the circle. They’ve lost their circle of salt and now the last protection, the candle is running low, you’re up the creak without a paddle……………. or a boat for that matter.

The horror shifts up a gear and the butcher gets doing what he knows best and that unfortunately for our adventurers is butchering, will anyone survive the savage onslaught. There are screams galore as our twits get picked off. The use of the hand held shots throughout adds to a sense of panic and distress as our chumps seem to be trapped in an endless bloody time bubble. 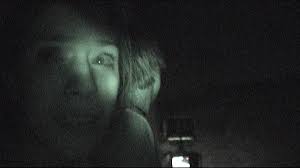 If you want to watch a BBFC 15, horror flick, this is a good one for Halloween, there is no nudity and the Australians seem to have only two swear words. This is fun horror with nothing too unpleasant but just enough scares to make it a decent shocker. I did feel the film makers tried to explain a little bit too much why they carry on filming, for me you don’t need to, we get it, as there wouldn’t be a film if there wasn’t a film. There’s some fun bits that might make you jump, so why not check in with the butcher yourself, oh …….. can we have even more blood in Butcher II please.

Review by Billious De-Ath
Beckoning the Butcher is released in the UK on DVD on the 13th October 2014, the DVD is good quality with clean sound and picture clarity. The disc also includes, the film with commentary, deleted scenes, trailer and more trailers from Monster Pictures, a thoroughly enjoyable selection of trailers, they are to, I fancy watching a few of those as well.