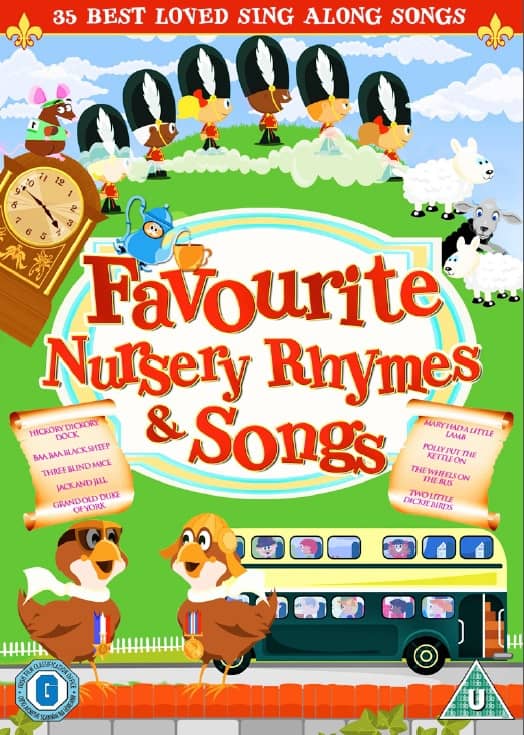 Not a complex thriller or savagely brutal horror, but a nursery rhymes dvd!

When I saw this available for review I thought it might make a nice change to look at something that my 3 year old daughter, Evelyn could enjoy too.

I don’t know what I was expecting here; I guess something from what’s rapidly becoming a bygone age of model-making, stop-frame animation, or even just something vaguely Thomas the Tank Engine-ish given the link to that show’s producer.

After initially pressing play, I’m surprised at how cheap and amateurishly ‘made at home on a computer’ this looks at first glance. It begins with a cartoon audience, silhouetted against a theatre stage upon which the nursery rhymes will play out. The stage curtain opens with a stock PC ‘Ta-da’ that’s been well over-used and a bunch of characters roll onto the stage. Oh dear, this looks bad!

But, as the first rhyme begins, and just as I ask the question ‘why are they wearing black suits?’… Surprise! It’s Gangnam Style!! Characters dance in Gangnam style poses as the nursery rhyme sets the usual lyrics and melody against a dance beat to comic effect. Evelyn starts smiling and gets up to do some spinning around the room!

And so it goes, traditional nursery rhymes given a new and original touch! Incy Wincey spider’s rhyme is interrupted by a brief refrain from Mission Impossible as the spider is lowered down a drainpipe in spy gear, past laser beams he cleverly avoids. Old Mother Hubbard’s poor doggy goes hungry because the short sighted old dear neglects to look in the right bone-filled cupboard; the door to the correct one popping open as she walks away at the end of the sketch, to comic effect.

Of course, Evelyn loves this dvd, sitting glued to the screen for some parts, singing along in others, and dancing about 50% of the time. She wants to watch it and re-watch it, so to that end it succeeds. If I had purchased this I would be pleased with it. It’s funny, encourages active participation and will keep children occupied. Very young children will enjoy the rhymes but miss the comedy, and slightly older children will giggle at the funny parts while still enjoying the classic rhymes too. Evelyn, who currently declares In the Night Garden to be ‘boring’ and ‘for babies’ is giving this the thumbs up.

With a healthy running time and packed full of rhymes (Polly put the kettle on, The wheels on the bus, Mary had a little lamb etc., they’re all here), I don’t think any attempt to criticise the visual quality really holds water. It’s supposed to be fun and engaging for little ones, I remind myself.

As a jaded adult, who am I to knock this refreshing new take on these well-loved classics. I’m glad now that they didn’t go for a tired well-worn approach, but decided to try something different here.

There were no special features on the disc.