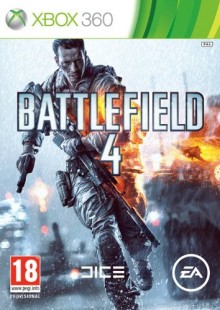 Like chess is to draughts and snooker to pool, Battlefield plays the wider, deeper, more strategic game than its tighter first person shooter counterpart, Call of Duty.

Thankfully not conforming to the one release per year ethic, famously adopted by Activision with CoD, it always seems like a bigger deal when a new Battlefield game comes out; it’s been just over two years since Battlefield 3.

It’s clearly been a tall order for DICE this time around, having to make a great game for Xbox 360, PS3, the next generation machines that are Xbox One and PlayStation 4, plus a PC version too. Three quite distinctly different platforms. It’s the current gen we’ll be reviewing here, on Xbox 360.

Battlefield 3 was, and still is, a hugely accomplished and comprehensive FPS. With its vast maps, wide range of vehicles, ultra realistic graphics and sound effects, it’s the most immersive fps we’ve ever played.

It seems a lot of people agree, and DICE seems very aware of this. Maybe this is why it has quite wisely not changed a winning formula too much. Instead applying some very careful and considered tweaks here and there which, for the most part, improve on an already fantastic game.

If you’ll excuse me, I’ll get the single player campaign out of the way first. Battlefield has always been about the multiplayer aspect, with the ‘story’ taking a back seat.

It’s nice that it’s there, because it’s always good to have extra game modes, but there’s nothing in here that you won’t find in any modern day FPS campaign. Spectacular set pieces, check; wayward, indestructible squad mates, check; token ‘shock’ scenes (torture seems to be de rigueur these days), check.

All present and correct, then, and none the worse for it really, but you’ll find no innovation in the single player.

As you might expect, DICE has focussed its efforts on the multiplayer part of BF4. As mentioned the changes are subtle, and this is evident right from the outset, with the very first menu screens looking strikingly familiar to BF3’s. It’s also at this early stage where our only real gripe with BF4 comes in.

In BF3, when selecting Quick Match, you were promptly taken to the next screen where you got to choose your map and game type. The game would then set about matching you up in a game that met these criteria. However, in BF4, you only get to choose the game type.

It’s not a massive inconvenience at first as all the maps are new and you don’t often mind where you end up, but if the menus stay like this, you’ll have to resort to the more lengthy process of server browsing in order to get the map you want as well as the game type. 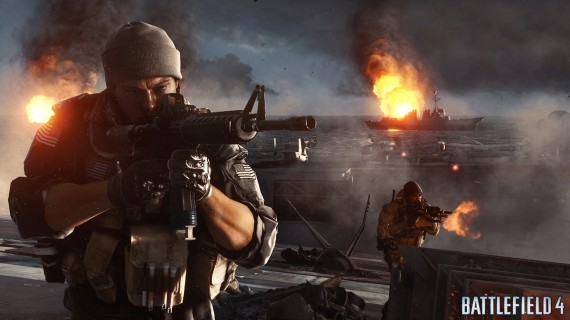 Here’s the good news: the 10 maps you get with Battlefield 4 are really good. You’d think they’d have run out of great ideas by now, but DICE has come up with some real gems here.

You may have heard the term ‘Levolution’ mentioned a few times at recent events like E3 and Gamescom. This is a concatenation of ‘Level Evolution’, and basically means that most maps can be altered quite significantly (and optionally) as multiplayer matches progress. The most visually striking of these being in Siege of Shanghai, where you can bring down the huge skyscraper that dominates the map, bringing a 1000ft high Conquest flag rudely down to earth (yet still able to be captured).

Two new game modes have been added to the usual roster, but it’s really only two variations on a theme.

They both involve planting and priming a bomb in an enemy area while they strive to either defuse it or stop you doing so in the first place. The only real difference between these two modes is that one is played in a smaller area, with smaller teams and no respawns.

One thing that we really thought should have been in Battlefield 3 was a private area full of vehicles, where you could stroll around without fear of being slotted by an elite sniper, taking each vehicle type for a spin in your own time and at your own pace.

Battlefield 4 has this very thing now, so you can practice to your heart’s content with all of the vehicle types, giving you the confidence to stride up to a fighter jet and take the hotseat, before getting shot to pieces by more skilled pilots about 20 seconds later (there are no aggressive CPU drones in the practice area, you’ll have to learn evasive techniques at the business end of things).

By no means a gaming revolution (‘gevolution’?), Battlefield 4 takes a conservative stance in this iteration, possibly hogtied by the fact that there had to be a current gen version. PS4 and Xbox One releases promise 64 player maps (it’s 24 on current gen) and obviously a higher resolution. 720p @ 60fps is so far confirmed for Xbox One, with PS4 hitting 60fps at a more impressive 900p resolution.

And that, dear reader, is a whole other kettle of fish.