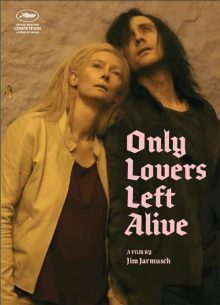 If there was some way to watch this film without knowing that the main characters were vampires before you went into the cinema the first 20 minutes would have been more enjoyable (although they would have been more enjoyable if the cinema staff at the Odeon West End hadn’t kept letting latecomers into the screening…). The amount of teenage girls in the audience made me cringe but make no mistake, this is no Twilight.

Eve (Tilda Swinton) and Adam (Tom Hiddleston) have been vampiric lovers over many centuries; he lives in the dead city of Detroit and she in the vibrant and ancient Tangier. Their iconoclasm extends to their clothes; Eve is white (yang) to Adam’s black (yin). Adam is a reclusive rock star and Eve an eternal muse with a lust for life. This pair of actors are perfectly cast as the louche lovers; junkies to O type and endearingly normal in some of their interests. At one point whilst on a little tour of Detroit they take a delightful detour as fans of Jack White. Adam needs Eve to bring him out of himself, she is his reason for “living”.

In between the dry wit that permeates most of Jim Jarmusch’s films (Hiddleston delivers some perfect dead pan one liners) there are moments of esoteric wisdom that only those who have lived for so long can access; there seems to be an excellent code for living for all of us zombies too. With many literary and filmic references and in jokes to enjoy this is a simple film at heart. 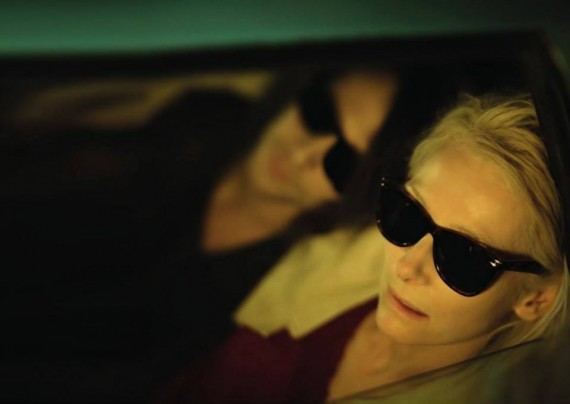 John Hurt as “Kit” Marlowe is a little treat as is Jeffrey Wright as Dr Watson, but the film belongs to Swinton and Hiddleston in their entire snake hipped glory.

The soundtrack perfectly suits the subject matter and the cinematography is lush despite being bound to the night time. This is a very stylish offering indeed and visually quite beautiful.

There is an aura of Withnail and I to this film; deliberately of the past and yet of the present. I will certainly watch it again. I predict a cult classic in the making.