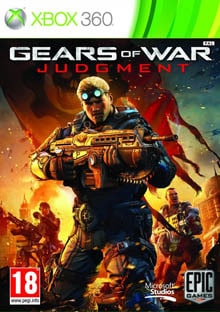 In Game Publisher World, if they think you’re tired of sequels, they often make you a prequel because that’s slightly different. It has about the same effect as if someone who was bored with sandwiches was given a prandwich, or somebody who was tired of strawberries was… ok that’s not going to work. Basically they think if they shift the chronology of the story, then that will make up for the over familiarity of the gameplay, which is more often than not built using the established game engine.

And so, with Gears of War Judgment, we get a kind if prequel. Lt Damon Baird is up in the dock, under threat of death penalty for setting off a firework in his bathroom (in truth an unauthorised lightmass missile, and not in his bathroom).

Baird gives his testimony as well as more familiar names like Augustus ‘Cole Train’ Cole. We don’t see Marcus Fenix in this game because he was of course already incarcerated at the beginning of Gears 1 (first chapter is Marcus escaping).

What you as the player do (they had to involve you at some point) is play out these recollections in real time, around the time of Emergence Day, which is when the Locust Horde first invaded the planet Sera.

So the scene is set, the players in place and the fight begins. It’s around this point that things start to become very familiar. The Lancer gun, the cover system, the roadie running are all present and correct.

Epic Games said it is going back to basics for this Gears but I don’t really remember them doing anything but the basics. Damn good basics, don’t get me wrong, but this shift to the old school ways feels very much like Gears of War 1, 2 and 3 anyway. 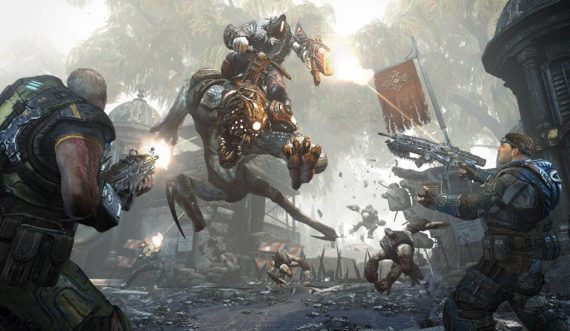 There’s really not much more to say about the single player campaign. Not without giving away the story at least. Graphically it’s fine, although there are some strange artefacts along the way (familiar floating rocks at the edge of textures).

The AI is also showing its age quite a lot; the enemies aren’t too bad but the friendly AI can be a bit clunky at times. Mainly people wandering into your line of fire and just standing there, soaking up bullets and having a pop at you for shooting them.

The multiplayer too is quite familiar ground, but with enough differences to make it interesting. Free for All, for a start, makes a surprise appearance (ubiquitous in virtually all other games but always absent from GoW, until now), and welcome it is too. For those lone wolves among you, uninterested in taking or giving one for the team, you can lurk away to your heart’s content, taking down literally anything that moves.

Overrun is another team-based affair, with five player teams up against each other, alternating between locust and horde with each round.

Gears Judgement does what it sets out to do with surprisingly little fanfare. It’s fast, furious packets of action that thread together to illustrate, of all things, the juicy parts of a court hearing. However, with the sunlight of gaming’s next generation bursting over the horizon, it feels fitting that Gears of War should be laid to rest now, or at least confined to current gen; which is where the whole Gears story started.

Speaking of which, every copy of Gears Judgement comes with a download code for the first Gears of War, so if you weren’t there at the beginning, you can at least now have a retrospective at your leisure.

Whether or not Baird, Cole and even Mr Fenix will return remains to be seen, but we can’t help but feel that Gears, with all of its quirks and nuances that rightly set it apart from other shooters, has had its day, and hopefully the NextBox will herald a new and fresh IP.