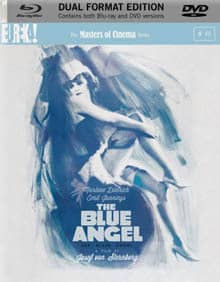 Masters of Cinema polish up and release another cast iron classic with The Blue Angel (a.k.a. Der Blaue Engel). It was a first time watch for me actually and most anticipated due to its reputation and, due to the fact I’d enjoyed The Testament of Dr. Mabuse so much recently, I was in the mood for some classic early German cinema.

The Blue Angel encapsulates its story in its opening minute when it shows a girl pulling down a shop shutter to reveal the poster for a raunchy show featuring Lola Lola; she washes the window it sits in, looking to want to scrub it off, but then stops and attempts to pose like the poster’s scantily clad model. Then the full story begins. We are introduced to Professor Immanuel Rath (Emil Jannings), an uptight and old-fashioned teacher that tries his best to keep his uninterested students in check. When he finds a number of them in possession of dirty postcards from a local nightclub, the titular Blue Angel, he decides to head over there to catch his pupils sneaking in.

Once he arrives though he ends up backstage in his embarrassment at being in such a ‘depraved’ establishment. There he stumbles upon Lola Lola from the poster (Marlene Dietrich) and instantly falls for her. After a couple of visits he does the ‘decent thing’ and marries her, but his school isn’t happy so he loses his job and ends up working for the traveling ‘entertainment’ company Lola is part of. This eventually leads to him hitting rock bottom as the company clown. 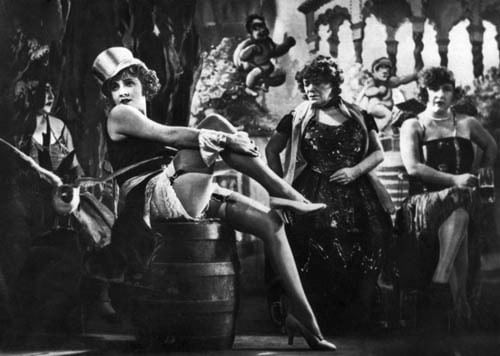 The most famous aspect of The Blue Angel has always been the fact that it made Marlene Dietrich a star and it’s easy to see why. From the instant she appears on screen you can’t take your eyes away from her. She’s sexy and magnetically attractive without forcing it. Yes she’s often wearing quite flimsy garments, but she doesn’t show her assets off in a faux-seductive fashion, she brings men to her knees when she’s roughly adjusting her outfit or hurriedly getting changed between acts. She has a natural sex-appeal as well as a strength of character and assertiveness that prevents her from being throwaway eye-candy. She knows how to control men and you’re never quite sure of her intentions toward the well-meaning professor.

Speaking of the professor, credit must go to Jannings for his performance too. He took top billing from Dietrich at the time (who is quite low down the film’s credits), but over the years he has been forgotten by all but the more knowledgable cinefiles (he is name checked in Inglorious Basterds actually, a reference to his Nazi propaganda work). He isn’t quite as mind-blowingly memorable here as Dietrich, but his pathetic downfall is well portrayed and his handling of the more comedic elements of the film is impressive. I did find his fall from a respectable member of society standing up for his feelings to a broken shell of a man rather too abrupt though. This is not Jannings’ fault though and brings me to my main issue with the film… 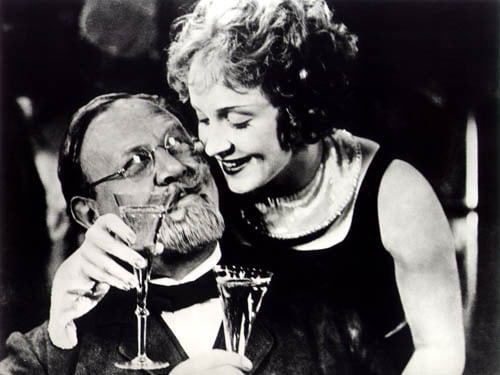 As strong as many of the elements of the film are, from the excellent performances to the classy cinematography, I felt the overall narrative arc let it down a bit. I found the first two thirds well constructed and was interested to see where the professor would take this star-crossed relationship, but with the abrupt change in character and straightforward downward spiral that followed I found the eventual denouement overly conservative and dated when elsewhere the film seemed quite honest and ahead of its time. I was particularly impressed by its portrayal of the seedy club world of the Blue Angel. Rather than make it a flashy, film-musical style setting with young glamorous girls everywhere on extravagant stage sets, the club actually looks cheap and seedy and the women are more down to Earth and come in all shapes, sizes and ages. I think this more realistic portrayal made me think the film would be a more interesting and open look at the world, but in having the professor fall so hard it felt like it was obviously damning it instead.

In general the film works very well though, it was only the last half an hour or so that disappointed me. Although not as obviously stylish or exciting as the work of Lang and Murnau, Sternberg’s film still proves that the Germans were a force to be reckoned with in cinema in the 20’s and 30’s. Hollywood obviously realised this as they all went on to work in the US after finding success in their home countries.

The Blue Angel is out in the UK on 28th January on Dual Format Blu-Ray & DVD, released by Eureka as part of their Masters of Cinema Series. I watched the Blu-Ray version and although it’s not quite as clean-looking as some of their other titles from the era such as their stunning transfer of The Passion of Joan of Arc, but it still looks very good for its age and puts other labels to shame. The sound is a bit weaker than usual too, but nonetheless is respectable enough for a film over 80 years old from a time when sound-synced films were in their infancy.

So it may not be Masters of Cinema’s finest transfer, but there are a great deal of extra features to make up for this. First and foremost is the full English language version of the film. I didn’t watch the whole thing I must say – with the entire cast performing in a foreign language I imagine (and noted in the section I did watch) that the film would suffer a bit in this format. You do get the popular song ‘Falling in Love Again’ in English here of course which is still a classic – although the translated lyrics of the German song seemed slightly more fitting in their meaning within the film for me.

Another notable addition to the release is a feature length audio commentary from Tony Rayns. I always enjoy his interviews and commentaries on the Masters of Cinema releases. He certainly knows his stuff and is a pleasure to listen to, giving honest analysis and a healthy dose of background information.

On top of these big inclusions to the disc, Tag Gallagher has produced a 30 minute video essay on the film. This is very dry and not particularly well produced, but is clearly well researched and interesting enough. Personally I could have done with more analysis and less facts about the previous and future work of all the cast and crew though. Next up is Marlene Dietrich’s original screen test for the role. This is wonderful to see – her feisty strength, beauty and magnetism is apparent from the offset. There’s also an interview with Dietrich from later in her life. This is too short to be of much interest thought to be honest. You also get 3 songs from Dietrich in concert, again from later in her life, but singing songs from The Blue Angel. I hate to say it but I’m not a fan of her singing voice and her presence wasn’t as potent in her older age, so these didn’t do much for me, but fans of the performer will love to see these choice cuts.

And of course you get the customary booklet of writing on the film. Here you even get a long piece from Sternberg himself as well as some gorgeous behind the scenes and publicity stills.