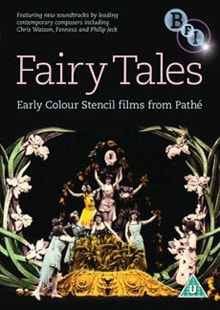 At the turn of the 20th century, with cinema still in its infancy, there blossomed a short lived form of film called ‘scènes de féeries’ or fairy films. Made famous by the groundbreaking French Pathé Frères company, these curiosities brought the lavish thrills of the theatre to the big screen. They utilised the painted backdrops, elaborate costumes and stage tricks that were popular at the time, while using the power of film to create some even more unbelievable magic to fresh faced viewers. To further add to the spectacle, the film makers also added colour to these films, utilising tinting and hand-stencilling to bring more life to their imagery.

The BFI have brought together an extensive collection of these films to release on DVD. With their reliance on spectacle over plot for the most part, plus the fact that a number of the films are missing segments, it’s an odd, rag-tag bunch of films that can often confuse and confound, so might not be to everybody’s tastes, but those that appreciate early cinema or the strange and surreal will find much to love. To bring things up to date, the BFI have also commissioned a series of brand new scores for the films, employing experimental artists from the Touch record label. Being experimental musicians, again these won’t be for everyone and in fact I struggled with a few of them, but it adds an extra element of surrealism to proceedings.

Here’s a breakdown of all of the titles included in chronological order:

Un Drame au fond de la mer (1901, 1 min)
Using a blue tint to set the scene under the sea, this is a short, surprisingly violent film where two divers fight to the death with axes over some treasure beneath the waves. The creepy score by Jana Winderen was actually recorded underwater.

Les Sept chateaux du diable (1901, 11 mins)
An oppressive droning score makes this rendering of the Faust legend quite disturbing to watch. The film itself consists of a number of impressive ‘appearing out of thin air’ effects, some lavish costumes, sets and backdrops. A climactic sword fight between a man and the devil is a standout scene.

Ballet des Sylphides (1902, 1 min)
This is a short, simple ballet performance. More colours are used here than in the previous two films, but the print is quite badly damaged.

Ali Baba et les quarante voleurs (1902, 9 mins)
This relies on the viewer knowing the story (which I don’t particularly), but the use of colour and sets are impressive. The industrial soundtrack got a bit headache-inducing though.

Valse excentrique (1903, 2 mins)
This is simply just a dance routine played out in a long shot (with a few hidden cuts), but it is rather acrobatic and bewitching to watch, with its swirling, light score and impressive dance moves.

You can view it here:

Japonaiseries (1903, 2 mins)
A foley-style soundtrack is accentuated to add to the comic tone of this Japanese-set magic show. There is a lot of visual trickery on display, ending with an amazing effect using reverse footage and superimposing/projecting images on top of one another.

La Danse du diable (1904, 3 mins)
This is a mesmerising little short that employs a peculiar bird’s eye view of a mischievous devil that dances around, performing strange tricks and making sexy ladies appear out of nowhere. The colourful visual effects are very impressive for the time. 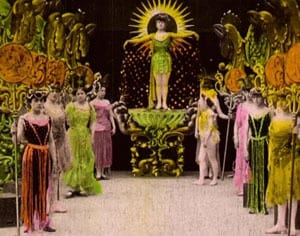 La Poule aux oeufs d’or (1905, 14 mins)
This has more of a clear narrative than most of the films in the set although it’s still quite odd and random compared to today’s films. There are some effectively surreal and creepy sequences in this imaginative short, such as the devil’s face appearing in an egg and spewing coins as well as the finale where our protagonist is sent to an egg-filled hell.

Martyrs chrétiens (1905, 7 mins)
This is quite unlike most of the films in the set, with a Biblical setting rather than a fairy story. It’s also rather graphically violent, depicting the martyrdom of Christians from the Bible. In one sequence men are eaten alive by lions, with guts on display.

Loïe Fuller (1905, 2 mins)
This is another short, simple dance number. It’s quite stunning and unusual though with a bat turning into a woman who proceeds to give us a skirt dance before disappearing into thin air. The dance is mesmerising with the skirt stunningly changing colour throughout the film.

L’Album merveilleux (1905, 5 mins)
This is in poor condition and the hand colouring is a little rough around the edges compared to the others, but it contains some impressive ‘appearing’ effects as pieces of paper from a giant book turn into people and then back to paper in the punchline. It’s repetitive, but enjoyably trippy.

L’Antre de la sorcière (1906, 7 mins)
This tale of a shepherd being taken away by a witch and tormented is full of more effective ‘disappearing and reappearing’ effects, but the mugging of the ‘comic’ simpleton lead put me off. The colour stencilling has been lost on this too, so instead we are left with a strange, black, flickering cast over items.

La Peine du talion (1906, 6 mins)
This is a sweet little story where a butterfly collector and his two attractive female assistants are captured by butterflies, who make judgement on the collector, punishing him by pinning him to a mushroom to show him how it feels. He promptly smashes his butterfly net and everyone lives happily ever after! I enjoyed this simple tale quite a bit and the use of colour is nice too.

La fée Printemps (1906, 5 mins)
A beautiful minimalist string score accompanies this sweet little film. A couple bring an old lady into their home to help her shelter from the thick falling snow, but it turns out to be a fairy who grants them a wish. This uses some effective reverse photography and the simple story works well.

Les Roses magiques (1906, 4 mins)
This is another magic trick piece, with a magician performing a number of acts using roses. The colours are crisp and clear though and the effects quite well pulled-off so it’s a fun little film.

Le Scarabée d’or (1907, 3 mins)
There’s not much to this peculiar film about a Egyptian sorcerer that sets free a magical woman from a golden scarab beetle, but it’s a visual treat with its coloured fountains and impressive pyrotechnics. 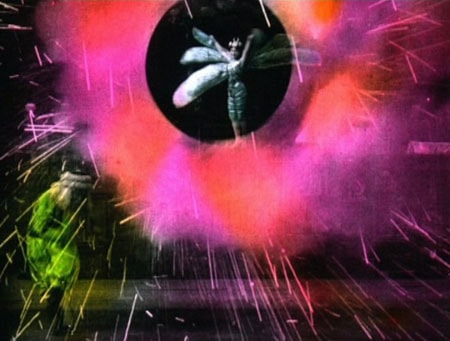 Cendrillon ou la pantoufle (1907, 16 mins)
This is a compact telling of the Cinderella fairy tale. The soundtrack is a little too subtle for my liking, but the film is elaborately staged. It’s more cinematic than a lot of the other titles, using some real locations and three-dimensional sets rather than simple painted backdrops. There’s an impressive effect where a wall blows in to reveal what is happening elsewhere in the story world. I found the film a little dull overall though due to the overly familiar story.

Le Spectre Rouge (1907, 9 mins)
Set in the fiery depths of hell, this is a visually interesting, red-hued magic show, with a skeletal figure using a lot of fire and smoke to create his tricks. The soundtrack was far too minimal for me, barely registering at all, but the film itself is creepy and odd with some impressive early special effects.

Le Pied de mouton (1907, 5 mins)
This played strangely on my system and is missing a few segments, so I found it tough to watch. Another overly minimalistic score didn’t help. It does have some elaborate stage tricks and a bizarre imagination though so I found myself quite intrigued by the whole thing.

La Sorcière noire (1907, 4 mins)
With a beautifully painted Arabian backdrop and some vivid colours, this is one of the more visually impressive pieces, but there isn’t much to the film itself, just another series of tricks with fewer impressive effects than in other films.

La Belle au bois dormant (1908, 14 mins)
This version of Sleeping Beauty had a big budget for the time and it shows in the lavish production design. The colour is a bit haphazardly applied though and I found it a little dull, but the score is beautiful and the use of real locations and extravagant settings make it pretty to watch. 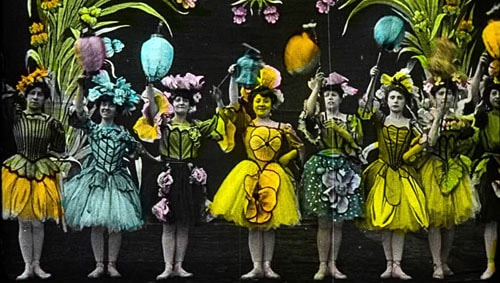 L’Oiseau blue (1908, 12 mins)
This is a frustrating watch as there looks to be some great filmmaking there, but a number of scenes (including the beginning and end) are missing, the print is in poor condition and the soundtrack is so harsh it’s unlistenable. It looks very nice though and the production values are once again quite high, but the current presentation is a shame.

La Légende du Fantôme (1908, 9 mins)
I enjoyed this one a lot. It doesn’t make a lot of sense – a woman unleashes a bunch of demons from a graveyard and she’s set out on a quest which largely involves her driving around in a gothically modified car with a bunch of transformed demons around a strange underworld. In this land there seems to be a lot of demonic partying going on too with the creatures dancing around all the time with lots of flares and fireworks. It’s bat-shit crazy but a lot of fun and the playfully inventive score fits it perfectly.

Le Faune (1908, 5 mins)
This is an incomplete fragment of a longer film, so doesn’t make much sense, but it’s very beautiful and colourful with plenty of fireworks, flames and fountains as well as the customary fairies, magic and dancing.

Extra Features
For extra features you get three more films, plus an alternative score for La Danse du diable. The three extra films are very good. I’m not sure why the first, Au Pays de l’or wasn’t included with the others as it’s a fairy story produced by Pathé Frères. Anyhow, it’s a very carefully coloured curiosity with more clever effects. Next up is Georges Méliès’ Barbe-bleu, which isn’t in great condition, but you can still make out the beautifully painted backdrops and imaginative props and effects. There’s a particularly disturbing scene too where a woman walks into a room filled with bodies hanging in the rafters. The final film is a real gem, an early British animated version of Little Red Riding Hood. The animation style is fantastic, using cut outs for the limbs of the characters to make for strong, clear images that are carefully animated enough to stand up today. It’s a gorgeous little film that makes for an excellent addition to the set even if it’s a markedly different style.