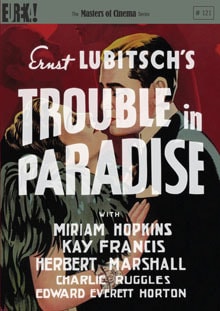 Whilst I sat entranced by Mark Cousins’ Story of Film: An Odyssey earlier this year I made a long list of films I wanted to watch and directors whose work I hadn’t seen any or enough of. Ernst Lubitsch was one of these directors. I think I may have seen Shop Around the Corner when I was young, but I can’t remember enough of it even if I had. I finally got my chance to introduce myself to the director’s work recently though with this carefully remastered re-release of his 1932 film Trouble in Paradise, which was his first comedy of the sound era.

Based on the play The Honest Finder by Aladar Laszlo, Trouble in Paradise sets the scene in Venice with the late night theft of the wealthy François Filiba’s wallet. We shift to the burgeoning romance between a baron (Herbert Marshall) and countess (Miriam Hopkins) in the same hotel, but soon discover that they are actually two thieves, the infamous Gaston Monescu (who had taken the aforementioned wallet) and small time crook Lily. They fall in love and as time passes we find them in Paris. Here they hatch a scheme to steal a large sum of money from the perfume magnate Mariette Colet (Kay Francis). Monescu (under the pseudonym Monsieur Laval) becomes her private secretary and gains her trust as well as her amorous advances. However, this romantic affection threatens to cause a rift between the thieving couple and disrupt the plan, as well as rousing the suspicions of Filiba who is actually one of Mariette’s wannabe suitors.

I fell in love with this film very quickly. Opening with a sly gag of having a man collecting litter and other filth onto a small barge, but singing opera as he rows it, this establishes Lubitsch’s tone and cynicism from the offset. He then follows this up with a shadowy robbery and an extensive and complicated crane shot which pulls out of the scene of the crime and moves right around the hotel to the other side where we find Monescu getting ready for an evening rendezvous with the ‘countess’. We are then treated to the sharp dialogue and sexual innuendo that dominates the film to follow, as Monescu explains to his waiter how he wants to “see the moon in the champagne” that night but doesn’t want to see the waiter at all. 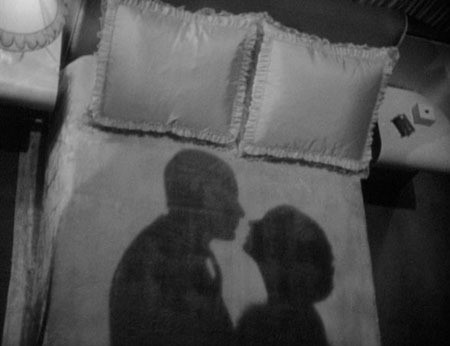 It’s a tremendous script, with endlessly quotable lines (“marriage is a mistake that two people make together” is one that springs to mind) and a superbly constructed plot – it’s cleverly pieced together, but never overly complicated. This wonderful writing is then brought alive by Lubitsch’s direction. He deftly handles the material, adding witty visual touches to make aspects clear without labouring them. He also knows how to get his actors to deliver such sharp material. What works particularly well and what got the film pulled from circulation in 1935 due to the production code (not to be seen again until 1968), was the film’s sexual suggestiveness. Of course in today’s comic world of crass sexual content this is incredibly mild, but Lubitsch’s visual gags involving the two bedroom doors on the landing and numerous witty innuendos make it quite clear what is going on off screen. This is a breath of fresh air to see now and makes for a fairly raunchy film beneath the surface but with a level of class missing from most films nowadays.

All aspects come together to create a vastly enjoyable ride. The pace is fast, with no lulls or padding. It doesn’t have the breathless energy of the screwball comedies of Howard Hawks or the zaniness of the Marx Brothers, instead coming across as a more intelligent and cynical cousin to these other early sound comedies. This cynicism is what makes it remain effective today too. The main motives of greed and sex are universal and will remain so throughout human existence. I’m certainly keen to work my way through the rest of Lubitsch’s oeuvre now. For anyone else unfamiliar with his work, this seemed like a great place to start.

Trouble in Paradise is out on November 12th in the UK on DVD, released by Eureka as part of their Masters of Cinema Series. As is to be expected from the label the picture quality is strong, with a slightly soft image, but very little damage for its age. The sound has a minimal hiss, but nothing distracting and it seems natural enough for something from the earlier years of sound cinema.

There isn’t a lot in the way of extras, just a 40 minute conversation between filmmakers and critics Kent Jones and Dan Sallitt on the film and Lubitsch in general. Technically this is a bit ropey and it’s very ‘off-the-cuff’ by the sounds of things, especially at the start, but as the conversation goes on, it becomes an interesting listen.

You also get an illustrated booklet as usual. I wasn’t sent a PDF of this as I usually do, but I imagine it will be a fascinating read as with previous releases.