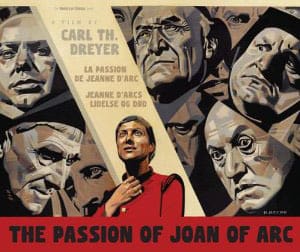 The British film publication Sight and Sound released their prestigious ‘Greatest Films of All Time’ poll earlier this year, a tradition that has been repeated every decade since 1952. I won’t go into too much detail about the list as I’m sure most of you heard about it when it was announced that Vertigo toppled Citizen Kane from the top spot which it had hogged since 1962. There were only two films in this year’s list that I haven’t seen, Fellini’s 8 1/2 and this, Carl Theodor Dreyer’s 1928 silent film, The Passion of Joan of Arc which has yo-yo’ed in and out of the top ten since the first poll. With Masters of Cinema, Britain’s very own Criterion Collection, bringing this respected classic to Blu-Ray and DVD, I finally got a chance to fill this gap in the highest annals of my ‘must watch’ list.

There isn’t a great deal to say about the film’s narrative. The script (as described in an opening statement) is based on the original transcripts of the trial and execution of the peasant woman that lead the French army to several victories before being captured by the Burgundians and who, almost 500 years following her death, became canonised as a saint by the Catholic church. The film does not delve deep into her past or future though, it merely chronicles the horrors and betrayals she had to endure at the hands of her captors as they tried to prove her heresy and force her to recant her claims that God had instructed her to act as she had.

And what horrors… This is an incredibly powerful and brutal film. I’d seen clips of it in Story of Film: An Odyssey so I was aware of its raw, visceral approach, but I wasn’t quite prepared for how unflinching and relentless it was. The film throws you straight into the trial and never lets up – the audience is forced to endure Joan’s endless questioning and seeming lack of choice in the matter. Her words are constantly twisted to make her out to be either a heretic or simply disturbed. On top of the mental anguish there are some physical horrors on display too. Although Joan is spared the use of some terrifying torture devices (displayed in an incredibly well cut and shot sequence), her weak state following this causes the judges to call for her to be ‘bled’ to ease her fever. This is shown in horrifically graphic detail as the ‘doctors’ cut open a vein and a good amount of the red stuff is literally squirted out into a bowl. The finale when Joan is burnt at the stake doesn’t shy away from the details either. 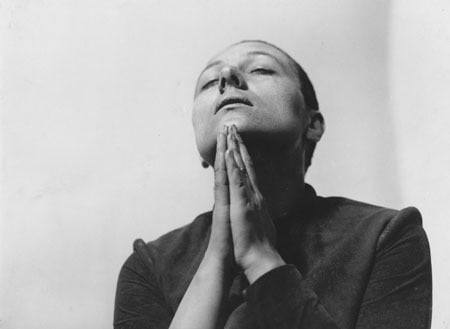 These final moments are amongst the film’s most powerful and indeed it’s probably one of the most powerful scenes in cinematic history. Dreyer’s skill in shooting and constructing a scene are never more apparent. The rhythm builds as the fire around Joan grows and whilst she is still alive, or at least able to communicate, we intercut between her, the burning logs beneath her, the reactions from the crowd and also more symbolically to a flock of birds she looks towards, enjoying their freedom in the sky above. This is incredibly moving and then after she gives one final cry of “Jesus”, all hell breaks loose around her. The peasants revolt, the soldiers gather their arms to quell the crowds and as this happens we keep cutting back to Joan’s charred corpse still burning on the pyre.

The Passion of Joan of Arc doesn’t reach its lofty heights of greatness by merely horrifying its audience with death and torture though. Key to everything is the central performance by Maria Falconetti as Joan of Arc. It’s one of the greatest of all cinematic performances, especially from the silent era. Yes, her wide eyed pleading at the start and never ending flow of tears may seem rather ‘big’ by today’s standards, but it’s hard to ignore the intensity and bravely raw power of it. Most impressive is her deterioration through the film from desperate and outwardly defiant at the start to an almost empty shell by the end. Ever present though is strength in her self-belief and faith in God, even when the end is in sight. The film is a gut-wrenching experience, but largely due to Falconetti’s Godly innocence and a couple of moments of grace and beauty (the shadow of the cross on the floor and the flowers/weeds growing by the outer walls) it retains the glimmer of hope and good that was in Joan during those final days.

Also important in the strength of Falconetti and her character is how Dreyer shoots her. Falconetti as Joan is pretty much always shot in close up and she has little to no make-up on, to bring through the ‘real’ portrayal of the events as well as to allow her inner beauty and strength to take centre stage. This is even more apparent in the later scenes when she is forced to have her hair cut off (which Falconetti had done for real). The big close ups also force the audience to experience the trial through her eyes (there are even some POV shots from Joan’s perspective) and truly see the pain she is going through. You see every tear and all the terror in her eyes in full detail. 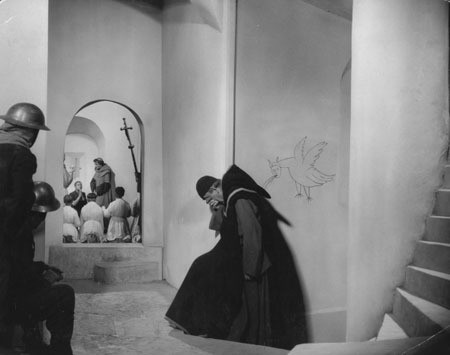 As well as keeping his camera close and not allowing his actors the ‘protection’ of make-up, Dreyer’s sets are sparse and bare too, with the film taking place against white-walled rooms or overcast skies. Nothing gets in the way of the human drama, everything is stripped down to the bare essentials. That’s not to say it’s visually dull though. Dreyer shoots in every conceivable fashion, incorporating long dolly shots across the crowds of judges glaring down at Joan, crashing in to some close ups and bringing the camera low or high to look up or down at characters depending on the desired effect on their state in the scene. There is some bold framing on display too pushing characters to the corners of the frame and filling the rest with seemingly empty space. The finale even brings the camera swinging upside down to mirror the uncontrollable carnage of the uprising.

The Passion of Joan of Arc is an incredible work of cinema. Often such highly regarded classics require a couple of viewings to shake off the hype, but this grabbed me right from the offset. It’s a draining and relentless experience, where you are forced to cling to Joan’s inner strength and belief as there is little else left (no mean feat for an atheist like myself). Certainly harrowing, the film is heavy going, but also profoundly moving and staggeringly well made.

The Passion of Joan of Arc is out in the UK on 26th November on Blu-Ray, DVD and dual format steelbook, released by Eureka as part of their Masters of Cinema Series. I watched the Blu-Ray edition and the picture quality was stunning. A lot of care has obviously gone into restoring the film. A special feature is included which shows before and after restoration clips of the print to prove this. I’m glad I saw this first in HD rather than a DVD or VHS version as being able to see such detail in those big close ups really accentuates Dreyer’s unvarnished, raw presentation. You can see every pore in the rough faces of her tormentors, the glistening tears welling in Joan’s eyes and the tracks of those that came before.

There are no documentaries or interviews included, but what you do get is the option to watch the film in 3 different formats. You’ve got the ‘director’s cut’, showing the film as Dreyer intended, in two versions. You can either watch it at 20fps (supposedly the most natural speed) with a beautiful piano accompaniment by Japanese silent film composer Mie Yanashita or at the standard 24fps with a radical avant-garde accompaniment by Loren Connors. Then on top of those formats, you can watch the complete ‘Lo Duca’ version of the film, the version which was originally shown around the world for decades. This was reportedly a butchered cut which Dreyer did not approve, made up of alternative takes from the production. I watched the 20fps version of the ‘director’s cut’ which sounds like the recommended option for those that aren’t bothered about watching all three. I checked out the other two briefly and did feel that the 24fps version felt a little unnatural and the ‘Lo Duca’ version hasn’t been quite as polished as the other ones for obvious reasons.

The package comes with a 100 page booklet as with all Masters of Cinema releases and they’ve really outdone themselves this time. There are several essays and articles on the film by an array of well known film theorists (and filmmakers) such as Luis Buñuel, André Bazin and Chris Marker, a piece from Dreyer himself, an look at the different version of the film and designs and mock-ups of the sets. There is everything you’d want to know about the film here, it’s a wonderful read and more than makes up for the lack of documentaries or featurettes.