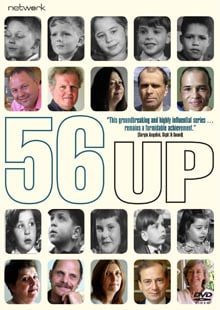 The hugely ambitious and critically acclaimed Up series continues on through it’s long journey with 56 Up, which aired in the UK this May. Network Distributing have just released this, the latest instalment, on DVD after releasing a box set of the rest of the ‘episodes’ at the end of last year.

For those that haven’t heard of it, the Up series began in 1964 with Seven Up! At the time it was just a World in Action special on ITV (one of the main UK TV channels) which set out to look into Britain’s rigid class system and was inspired by the Jesuit saying “give me the child until he is seven and I will show you the man”. The programme had a simple structure of asking basic questions about the lives and prospects of 14 seven year old children who all came from varying backgrounds in the UK. In the first film the intention was to make a political statement about the mapping out of these children’s lives and how they seemed destined to follow in their parents footsteps from an early age due to Britain’s class system. However, Michael Apted, who was a researcher on Seven Up! went back to interview the group seven years later in 7 Plus Seven. Again, the intention was political to see how closely the children were sticking to the routes we assumed from the previous film (or were even described in great detail by the upper class participants). However, that proved so popular Apted ended up repeating the process every seven years and continues to do so to this day.

The format has remained the same, with interview topics sticking to the same structure, although as the episodes moved on more questions were asked about how participants felt about being part of the programme and obviously further feelings about family and children came into play with partners joining in the conversation. Over the years the films lost much of their political edge because that class-focussed message became clear after the first two or three, but they began to unfurl more pleasures and intrigue. On the surface there is of course the need to find out ‘what happened next’ to all of these characters, but also it became fascinating to view so many differing reflections on choices made, the future, relationships, bringing up children etc. To listen to so many philosophies on life from average ‘real’ people is thought-provoking and endlessly watchable. Even at quite a hefty 144 minutes I quite easily sat through the whole episode, even though when it was broadcast on TV I believe it was split into 3 parts. 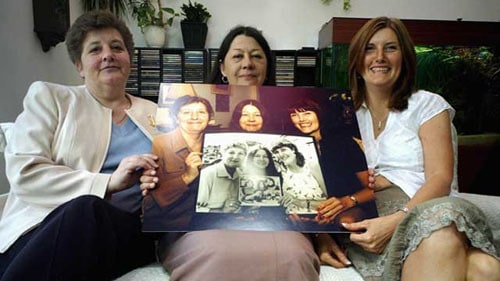 So what of 56 Up? Well, on paper it’s more of the same of course, but that’s not a bad thing by any means. The whole concept of the endeavour would be spoilt if Aspel veered too far away from the formula. There were a few subtle welcome changes though. I hadn’t seen any of the series prior to being sent this screener, but I’d bought the box set, so I worked my way from Seven Up! to 49 Up in the space of a fortnight or so before moving straight onto this and what I did notice was that, where previous instalments had recycled voiceovers and clips a little too repetitively over the years, especially for participant introductions, 56 Up thankfully reworded some of these section openers and tended to go easy on the soundbites from the first two episodes which were growing far too familiar after watching them all back to back. There are still a lot of clips from previous interviews of course, that’s how it works, but this time the older cutaways blend with current content more smoothly, using the modern interviews as voiceovers for the vintage clips more often than before.

The lineup of interviewees is as complete as it has been since the 70’s too. As the participants reached 28 a couple of them declined to participate and from then on, interviewees would come and go. This year though everyone from Seven Up! is back other than Charles who gave up contributing once he became a documentary film maker himself. This (almost) full house makes it a gem for fans of the series and we even get an odd surprise when Suzy and Nick appear as a double act, interviewing each other. Peter is the one that has been gone the longest and he’s back after a 28 year gap. He clearly agreed to participate to plug his band (much like John joining in again for 35 Up to plug his Bulgarian charity work) but it’s still nice to catch up with him. I could have done without his cheesy music video though.

Something else I liked about this recent instalment was how much more reflective it was than previously. Almost every participant speaks openly and often bluntly about their feelings on being part of the ‘experiment’, which hasn’t happened to this degree before. Most interesting was Neil who has always been the most interesting and turbulent member of the group. Despite his seemingly difficult and troubled life he’s usually had a curiously positive slant on things, but here he expresses a lot of anger at the programme and the way people have had varying misconceptions about him and his character. This is especially interesting given that he seems more clear and focussed than ever before (he suffers from mental health problems).

It’s difficult to review and rate this as an individual documentary due to its concept and the way it works. I guess it could be watched as a separate film as clips are shown from the past episodes, but I would recommend getting the full set and working through them all as it’s a staggering achievement which is compulsive viewing despite its simple structure and presentation. For those that have seen the rest of the series this is definitely one of the strongest entries. It doesn’t have the fresh, groundbreaking impact of the first two of course, but it sensibly looks back at itself and polishes the rough edges here and there without damaging the essence of what the series sets out to do. Watched raw and taken out of context this wouldn’t necessarily be the most amazing of documentaries, but taking the history, patience and scale of it, it’s hard to deny it’s part of one of the greatest achievements in documentary history.

56 Up is out now on DVD in the UK, released by Network Distributing. Obviously having source material from various eras the picture quality is variable, but watching this straight after the other episodes it does look as though the older footage has been polished up more than usual. The clips originally in 4:3 have been cropped at the top and bottom to fill the 16:9 screen though which might bother some people. There were no extra features on the disc.