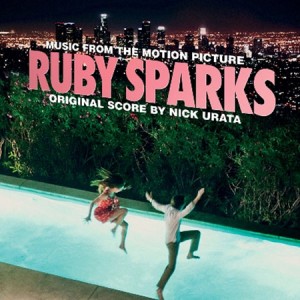 The story of Ruby Sparks (written by Zoe Kazan who plays the eponymous heroine) is about a novelist struggling with writer’s block who finds romance in a most unusual way: by creating a female character he thinks will love him, then willing her into existence.

With an original score by Nick Urata, a composer making a name for himself in Hollywood, this soundtrack is mostly an orchestral affair. This is an album you should listen to in track order; it starts with some of Urata’s compositions which build up a magical and romantic vibe. “She came to me” is a beautiful theme which really gets into your head. “Ruby Sparks” has Paul Dano’s voice over the top of it describing her character and background, creating her.

Mid album we get achingly cool French pop (the brilliant “Ca Plane Pour Moi” – you love this tune, you do) and classic reggae which really evokes how it feels in that first burst of love and passion and is smile inducing. Then we have a return to Urata’s score which takes on more menacing and darker themes; the whimsy is gone and the reprise of “She came to me” has been changed by a downbeat voiceover, once again by Paul Dano.

The soundtrack has a very classical feel in that it tells its own tale; whether it is reflected in the film is something I do not yet know – but after listening to this I now cannot wait to see it. I think this is a perfect mix and to be honest I am a bit obsessed with it at the moment.

The soundtrack is available on CD and digital download now.