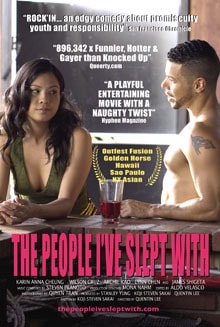 This is what happens when you cross something as bawdy as the American Pie movies and a bog-standard, Hollywood rom-com. Not only is this contrived, it also doesn’t really work as a film either.

Angela, played by Karin Anna Cheung, is very open about the fact that she likes one-night stands, but says she’s not a slut. Sluts, according to her, are women who act like men. Whilst having a nice time she then manages, surprise, surprise, to get herself pregnant. The rest of the film is then about working out who the father is from her very extensive list of potentials.

So that she can remember who she has been with she keeps a photo of them and gives them a nickname too. She doesn’t ask them their name clearly, otherwise it would be too easy to find the father.

As she works through her list she has to acquire something from each person so that she can get a DNA sample to see who the father is once the baby is born. Apparently you can’t do a paternit test until the child is born. 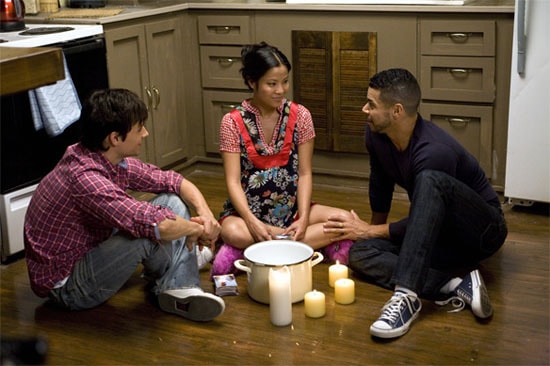 On this search Angela isn’t alone, she has a very camp gay friend Gabriel who, it transpires, is as equally useless in love as Angela. Gabriel is played very well by Wilson Cruz although he does appear to be simply an obvious gay stereotype: vain, shallow and promiscuous.

Despite this the character is quite believable and a darn sight more likeable than Angela. Her character isn’t helped by the fact that Karin Anna Cheung clearly isn’t the greatest actress in parts of the film. She comes across as rather wooden at times and not really very convincing. And then when she falls in love with one of the potential fathers you feel no sympathy for her or even have much desire for her to be happy.

As I have said, the film is billed as a rom-com despite the fact that it has very little rom and almost no com. It’s quite explicit and dark in places and certainly isn’t what you would expect from your typical Hollywood rom-com you would see Jennifer Aniston in for example.

Overall although I wasn’t expecting much, The People I’ve Slept With is rather disappointing and I found that I never really engaged with it. Unfortunately there are better, funnier more romantic films out there than this that deserve your time.