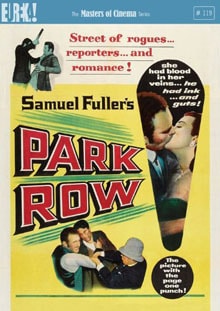 Writer/director Samuel Fuller began his career not as an underling at a film studio, but as a journalist. At the tender age of 12 he was a newspaper copyboy and by 17 he was a reporter for the New York Journal. This line of work eventually steered him towards screenwriting and after joining the front line in WWII, he eventually moved on to directing – largely war movies after his first hand experience. In 1952 however, he embarked upon making another very personal film, expressing his love for his first career with Park Row.

Potential producer Darryl Zanuck liked the script, but requested a number of changes to the project. He wanted the film in colour, with a younger, more attractive lead and even suggested turning it into a musical! Fuller of course was having none of this. “Fuck the studio system!” was his reply. As he puts it, “I had some money in the bank, exactly $201,000. I left $1,000 in the bank for cigars, brandy and vodka, I took the other 200,000 and put them in the film.” So, even beyond the subject matter, this was a film Fuller put as much of himself in as he could. In his words, “Goddamnit, Park Row was me!”

Park Row begins in the 1880’s with Phineas Mitchell (Gene Evans), a reporter at ‘The Star’, getting fired from the newspaper due to a refusal to be dishonest and manipulative in his reporting. Hearing him take a stand against Charity Hackett (Mary Welch), the proprietor of ‘The Star’, and then vow to start a truly honest paper of his own, a friend offers to give him the means to do so. Along with a group of likeminded and passionate newspapermen, Mitchell sets about writing and distributing ‘The Globe’, which quickly becomes the talk of the town. This of course rubs Hackett up the wrong way and the two begin a bitter war of words (and more as the film goes on). 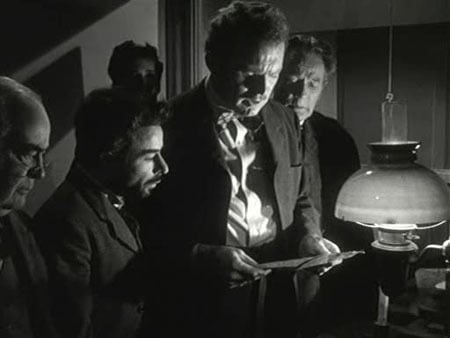 Being impressed by Fuller’s Naked Kiss and Shock Corridor which I watched for the first time quite recently, and being personally interested in the subject matter, I had high hopes for this, but I must say I was quite disappointed. As lazy as it is to quote such a recent review, Matthew Lee over at Twitch put it very well when he said “Park Row is a love letter… but I wanted a film”.

Park Row condenses much of the history of newspaper journalism into the short space of time the film spans and in doing so gets rather bogged down in exposition explaining the machinery and processes of the job, plus these proud newspapermen seem to be pushing boundaries with every new day at ‘The Globe’. With all of these encyclopedic elements, added to plenty of heavy handed speeches about honesty and truth, there is little left for an interesting story. When things do happen, they get a bit soapy too, with a clunky, unnecessary love story derailing things towards the end (isn’t a love of journalism enough?).

It’s certainly not all bad though and I don’t want to give the impression that the film isn’t worth watching. Being a Samuel Fuller film, it’s big and brash, with some bold cinematic techniques on display that may be rough around the edges, but pick you up and slap you about a bit. Most impressive is his use of long takes. A great majority of scenes play out in one shot, including an epic action sequence as Mitchell fights his way through the street as ‘The Star’s goons knock down ‘The Globe’s newsstands. Even in the quieter scenes, Fuller packs his frames with characters and machinery, making for a dense visual experience. His dialogue, although often preachy, is snappy and fired out like a machine gun too, adding to the fast pace and density. Flawed it may be, but dull it certainly isn’t.

So Park Row is not the greatest film in Fuller’s career, with his love of the subject matter diluting the usually wild and controversial joys of his finer work, but it’s nonetheless solid evidence of the director’s ballsy use of the medium of cinema.

Park Row is out now in the UK on DVD, released by Eureka as part of their Masters of Cinema Series. The picture quality seemed a bit more flecked and the sound a little crackly at the start of the film, when compared with the usual Masters of Cinema releases, but this clears up after a while to reach their usual high standards. There are some strangely soft shots now and again, but this seems to be an issue with the source material.

Extras-wise you get a music and effects track, a short but informative interview with Christa Lang Fuller (Samuel’s widow) and a 20 minute piece, ‘Bill Krohn on Park Row’, an intelligent and well researched video where the critic discusses the background of the film. As ever, you also get a booklet filled to the brim with essays and interviews which always make Masters of Cinema’s titles worth their slightly increased retail price.