Ali and his son Sam arrive hungry and broke at the house of his sister, who he hasn’t seen for five years, in the south of France. Ali begins looking for a job and his past life as a boxer comes in handy, getting him some work as a bouncer at a local club. One night he intervenes in a fight and ends up driving home a bloody-nosed Stephanie, who has been out clubbing on her own. Back at her place he doesn’t get much of a welcome from her boyfriend but then neither does she.

Ali moves to security work where he becomes involved with Martial, a night worker who covertly fits CCTV cameras into shops all over town so the managers can spy on their staff. He also organises illegal bare knuckle boxing matches and recruits Ali to fight.

Stephanie is back at her job, an Orca (killer whale) trainer at a local water park. She loves the whales and she loves making them perform for the crowd until a freak accident happens, meaning she’s knocked into the water and attacked by these same whales. Due to this her legs have to be amputated. Abandoned by her boyfriend and isolated from her friends at work, Stephanie calls the last person to leave her his number, Ali. 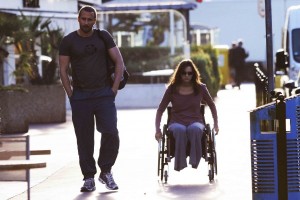 The word ‘visceral’ is often thrown about when describing particularly violent films and, make no mistake, Rust and Bone contains a lot of violence, boxing and generally beating the hell out of his opponents seems to be the only thing that the main character Ali can do well. The film deserves its 15 certificate for both sex and violence. The physical nature of this film however reaches beyond the fight scenes to the heart of the movie. It’s a story about physical pain and challenges, surviving everyday and dealing with physical needs. The film’s style compliments its themes and the characters’ emotions, or lack of them are portrayed through physical sensations, from the hope Stephanie feels from the warmth of the sun on her face, to Ali’s business like approach to sex with women for whom he cares nothing. Its beautifully shot film, perhaps too beautiful however, the light and delicacy of the camera work a little too warm for these hardened characters.

The two leads, Marion Cotillard and Matthias Schoenaerts are excellent. Cotillard is truly believable as a devastated but strong willed amputee coming to terms with her new life, at times breaking down and at others free to lose inhibitions and start life afresh. Her performance is helped by the stunning visual effects used to create her amputated legs. (Apparently they were simply “removed” in post production but I’m sure there must be more to it than that, I’m also sure of an Oscars nod simply for the SFX). Schoenaerts is consistent as the boyish insensitive thug, shown most keenly in his treatment of his son with whom he’s far too harsh without realising it. The beginning of the relationship between the main characters feels somewhat contrived, as in so many films, but its development is at the same time unconventional and yet sadly understandable.

There’s virtually no back-story to the characters but we understand as much as we need to, that neither are happy, and might not have been in their previous lives either. There’s a conflict that you feel as a viewer, that while you so desperately want the characters to heal their emotional wounds as well as their physical ones, a completely happy ending would have been a step too far for these complex characters and thankfully the film stays true to itself and doesn’t attempt this.

There is a measure of redemption but be warned these are characters that, as in real life at times, it’s hard to get close to. This is a love story so restrained that it’s perhaps let down just a little by a lack of love. Otherwise though, an original, involving and beautiful film with some stunning performances. Definitely recommended.