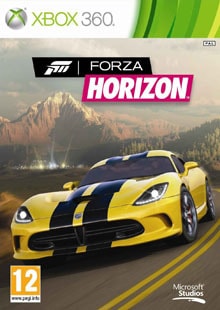 Much like Codemasters’ recent DIRT Showdown, Forza has shaken off the gameplay shackles of its predecessors and also the numerical suffix to indicate which one is the newest. What we have here is Forza Horizon, and it’s really quite lovely.

Horizon, then. It does have some lovely horizons, being set in an open world chunk of Colorado countryside, there’s also the new horizons that unfold in a metaphorical sense, with new gameplay mechanics (new to Forza, anyway) replacing the more stoic, regimented, circuit based chicanery of previous outings.

Bang in the middle of the map of your Colorado playground is the central hub that is the Horizon Festival. This is a slightly contrived although beautifully created ‘fest’, celebrating all things car, complete with fairground rides, a sound stage, well over a 1,000 actual rendered people and probably more of those flag banner things. You know, these.

There’ll be no skylarking about at this festival for you though, not outside of your car at least, as this hub also serves as the location of Forza’s familiar car shop, paint shop, auction house, upgrades and the recently introduced car club. All popular and all retained, fans of the brand will be pleased to hear.

Forza Horizon starts with you motoring your way to the festival in a half decent, modded VW (it might turn the odd head in an Asda car park but you wouldn’t be allowed onto Waitrose premises), when speed demon Darius Flynt roars past you, while the radio coincidentally announces that he’s the man to beat this year. We raced him as hard as we could but we were no match for the sleek, finely tuned machine that he was driving. For reference, he’d definitely be allowed to park at Waitrose. 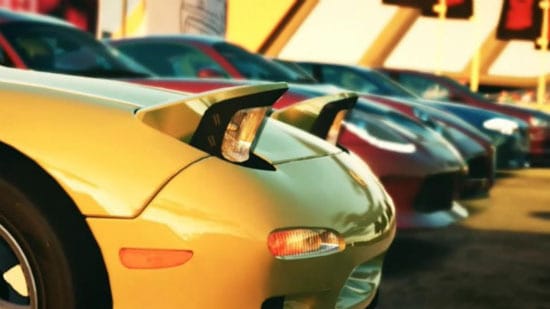 At the Horizon Fest, a comely maiden with short shorts snakes up to your window (not on her front, she does have legs) and hands you your documentation, meaning you’re definitely in the running for this year’s top driver. There are 250 drivers in all and our nameless, mute protagonist is 250th in popularity.

As alluded to earlier, Forza Horizon is very much an open world racer. It shamelessly borrows ideas from heavyweights such as Burnout Paradise, Test Drive, and even GRID and Dirt (especially Dirt 2) in other ways. There’s nothing wrong in taking inspiration though if you’re going to make something as good as this while standing on the shoulders of those giants.

The move from 60fps to 30 is barely (ie not at all) noticeable, but what it gains in the trade off is, and that’s some of the most fantastic graphics, both on vehicles and scenery you’ll see in a console driver. And as if to show off its stunning light rendering, each 24 hour cycle lasts just half an hour of real time. It’s at night when the festival looks its best and it can be seen in the distance from most areas of the map, with its laser displays and fireworks casting colourful hues onto the resident air balloons. It’s a stunner alright.

Sound wise, well Turn 10 has a huge catalogue of car engine noises already and they are of course all still here. From the throaty roars of the ubiquitous American muscle cars, the cat like prowl of a TVR ticking over, to the furious screaming of an overzealous Zonda, Forza was never going to disappoint in this area.

The radio stations are OK enough, with three stations pumping out slightly different genres of music, mainly from bands you’ve never heard of, and not always best suited to driving. There’s always the option to wire up your own music instead, while keeping the car sound effects of course. 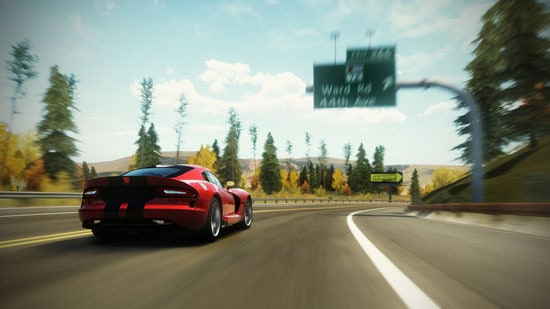 Events range from official festival races, to illegal street races, plus challenges that come through from CPU players and also from players in real life. Complete any race and Forza will always offer you to run it again against the ghost car of someone who’s done it before, favouring those of your Xbox Live chums over strangers if it can. This sort of thing typically feeds into leaderboards so you can see how you are faring against your friends. Stock in trade stuff with racers these days but we’d be complaining if it wasn’t there, so in it goes.

Some of the more bizarre challenges will see you racing against planes, helicopters and even air balloons. The obvious advantages to each vehicle being evened out by the nature of the race. Of course a plane is faster than a car but plane races are checkpoint based, and a car’s turning circle is much tighter than that of your average Cessna.

Progress is made, obviously, by winning races. Race types and events are tiered though, and you need the right coloured wristband to compete in the higher level competitions.

Wristbands are dished out when you pass a certain level of popularity (Going from 250 up to 1), which you boost not only by great performances but by how ‘interestingly’ you drive. It’s standard fare here: drifting, drafting, jumping, and the combo’ing of these and others will chain together to fill up your popularity meter. When it fills, you’ll get more popular by a single unit, so nobody’s going to be hitting the top spot anytime soon.

With its cheery festival feel, forgiving handling and physics mechanics, plus the literally go anywhere rulebook, Forza has been turned on its head, while retaining the core essence of what’s made the series so unfailingly brilliant over the years. An absolute triumph and almost impossible to put down when out on the tarmac, or even off road. Yes, the rallying! We forgot about the rallying! It’s great! Buy this game!