To simply put it, Crows Zero 2 is a great film but it’s not perfect. I didn’t have any idea what Crows Zero was or what type of movie it was going to be and I haven’t seen the first movie but fortunately enough, that didn’t matter as the second movie fills you in on everything you’ve missed. The only thing that I did know is that it was directed by Takashi Miike, the director behind Ichi the Killer, Audition and 13 Assassins and that the movie is based on a manga created by Hiroshi Takahashi. For all of the people who don’t know what Crows Zero is, think of rival gangs in high school with a serious gangster twist to it.  The story is quite good as we see Genji, the main character of the series, wanting to fight Rindaman, the only kid in the school he hasn’t defeated and when he does, he will become the leader of the school, Suzuran, and the gangs inside it. However, Genji puts this to one side as a truce with rival school, Housen, has been broken due to the murder of one of its leaders and Housen looking to avenge him. Sometimes, the movie is a little goofy and cheesy but it’s fun and enjoyable to watch and the fight scenes in the movie are to be admired if you love action in your movies. However, in saying this, don’t expect some of the fights to be realistic as sometimes, it can be over-the-top but this doesn’t spoil the entertainment, it just makes it a bit better. 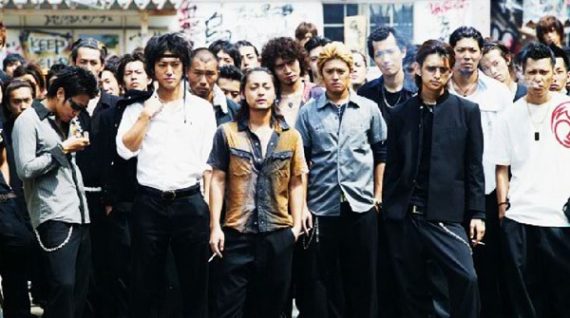 Crows Zero 2 has some good acting from its cast with some great moments from quite a few of the kids from Suzuran. The comedy in the movie is great with some funny scenes that successfully manage to get a few chuckles from the audience and its overall quirkiness is fun to watch as well. The characters in the movie are very well written although there were a couple of times near the start of the film where there was a little confusion as to what character belonged to which gang, but eventually you knew where they belonged and could remember throughout the film. With some great violent fight scenes, a good story, some well-written characters and decent acting on top of that, Crows Zero 2 is a winner to any action movie fan.

If you don’t mind subtitles, I would recommend any action fan to watch this movie. It’s not the best action movie I have seen and, even though I can see why fans love this movie, I can’t see why the fanbase think it’s fantastic. Don’t get me wrong, it’s a good movie and I’d probably watch it again in the future but I could name better action movies with a better story and better characters. However, what I did like was how pretty thought-provoking the movie was about power and what people would do to get it. If you haven’t seen Crows Zero then it’s probably best you watch that first before doing what I did and just jumping straight to the second movie but this is a good movie for those who like action films and for those who like manga.