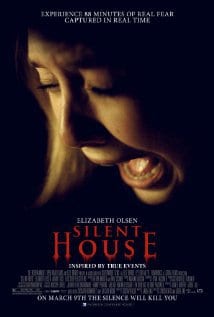 Remakes are always tricky for one to review. The typical response to the news of a popular film being re-made tends to be ‘it won’t be as good as the original’ or ‘I know I’m not going to like it’. The general consensus is that they are pointless. I’m not sure of any re-makes which outshine the original; I think it’s more a case of analysing how it stands on its own as a completely different film.

Silent House is a re-make of Uruguayan horror flick La Casa Muda. This film was screened at several international horror festivals including the Razor Reel Fantastic Film Festival & the Abertoir Festival. Laura (Elizabeth Olsen) and her father John (Adam Trese) settle down in an old farmhouse to make some repairs and update it prior to its sale. However, after they spend the night there, things start to become strange. Laura hears a sound that gets louder and louder on the upper floor of the house. John goes up to see what is going on while she remains downstairs, waiting for her father’s return. What follows is a fight for Laura’s and her father’s life. 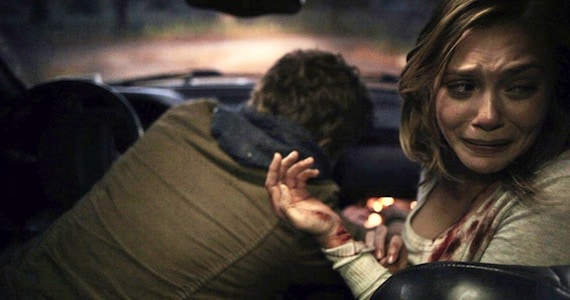 Although the original was very clever in that the film was claimed to have been shot in a single take (‘real time’), Chris Kentis & Laura Lau’s version also keeps you guessing but this version lacks conviction. Although it is beautifully shot and has some genuinely scary moments the ending does not make sense and leaves the viewer feeling cheated. It also makes you realise how many holes in the narrative there were and that the film has a very illogical backbone.

There appear to be very few horror films which have solid character depth to them. None of the characters develop and you end up not caring for any of them as the film continues. By the end of the film when the banal twist is revealed, you end up sighing as opposed to feeling shocked. In addition, the last 15 minutes of the film is the point where the acting, dialogue and story crumble and the film becomes another one of Hollywood’s pointless re-makes.