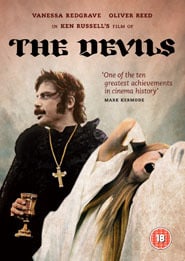 Sadly reaching the end of his life back in November, Ken Russell was long a figure of controversy in the history of British and indeed world cinema. Famous for his flamboyant, campy style and frequent exploration of sexuality and the grotesque in his work, his films were always an acquired taste, to say the least, and his career dwindled in the last couple of decades. Back in the late 60s and early 70s he was a force to be reckoned with though, finding success with Women in Love, The Boyfriend and Tommy, despite his films having that ‘marmite’ effect on many. Certainly the most controversial, well known and probably most well-received of Russell’s films came early on in this period in 1971 with the release of The Devils. With scenes of nuns taking part in depraved sexual acts and graphic gore and violence, the film struggled to get past the censors, with certain scenes being removed for its cinematic release and several more shaved off for home video. Even now, 41 years later, the film has long struggled to get a DVD release in the UK and those scenes missing from the cinematic release have not been reinstated. These wrangles have even prevented a Blu-Ray version from being released. The BFI, however, have finally given the film the full-blown special edition treatment with a 2-disc edition of the film utilising the finest available transfer so that we can witness Russell’s masterpiece in all its grotesque glory. 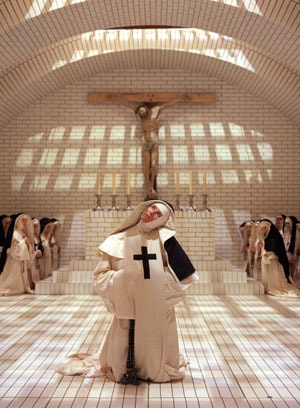 Based on a play by John Whiting and Aldous Huxley’s novel ‘The Devils of Loudon’, which was based on detailed research into true acts of the time, The Devils is set in seventeenth-century France. Father Urbain Grandier (Oliver Reed) is the lustful head of the well-fortified city of Loudun, a key location in the king (Graham Armitage) and cardinal’s (Christopher Logue) quest to gain full control over the country. Taking advantage of Grandier’s bed-hopping antics and exploiting the erotic obsessions of the deluded mother superior Sister Jeanne (Vanessa Redgrave), the leaders send a cruel Baron (Dudley Sutton) and sadistic ‘exorcist’ (Michael Gothard) to bring down Grandier, literally and figuratively reducing the city to rubble.

I must admit I’ve never sat through any Ken Russell films in their entirety before this. I was always more of a fan of the gritty realism of American cinema in the 70s than in the high camp Russell is more famous for. I’ve seen segments of Tommy that didn’t appeal to me and although Altered States sounds more like my kind of thing, it always looked a bit dated. So it was with a certain reluctance that I approached The Devils. I must say I’m glad now that I did. Yes there are elements that haven’t aged well and the performances and style are ludicrously over the top as I expected, but there is also a hell of a lot to appreciate on screen.

What truly bowled me over about The Devils was how incredibly cinematic it is. Russell’s bold and exaggerated visual style matched with David Watkin’s meticulous cinematography and the staggeringly impressive production design from Derek Jarman all come together to create a feast for the eyes, bringing the horrors on screen to vivid, spectacular life. Added to this is a powerfully dissonant score from the groundbreaking British composer Peter Maxwell Davies, which helps bring back the unsettling nature which can occasionally be lost in the absurdity of it all. On a technical level, it is a truly astounding film to behold.

In other aspects it holds up well too. As mentioned, there are flaws. The campness can be hard to stomach at times, especially earlier on in the film (what’s with the crocodile?!) and the hysterical nuns can be a bit much. It’s certainly not a subtle film, but clearly subtlety is not something Russell strives for. The political underpinnings still remain powerful though despite the ‘in your face’ delivery. The state and ruling church’s manipulation of the people through religious facade and public displays of grand guignol remains a potent theme and creates a disturbing edge beyond the nudity, blood and guts. 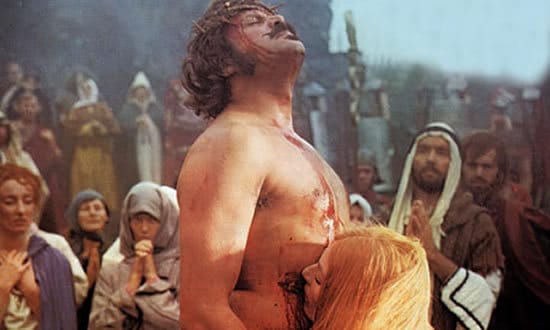 Performance-wise it’s not what you’d generally called strong all around, with high-camp and hamminess being the order of the day, but within the context of the film everyone is effective. Vanessa Redgrave is the prime example of this, delivering a ludicrously over the top portrayal of the mother superior driven to madness through lust. She seems laughable at times in her brutally physical performance, accentuating her character’s hunchback and clawing at her body and props constantly, but nonetheless it’s hard to take your eyes off her and when she is horrifically abused by the exorcist you truly feel her pain. Oliver Reed, on the other hand, is the rock on which the film stays grounded. He is a powerful presence on screen, delivering stirring speeches with great aplomb and effectively managing the shift from harsh womaniser to spiritual figurehead as the film goes on. Without this steady course, the film would simply descend into chaos.

The Devils, like most of Russell’s films seem to be, is not for everyone. Some might label it crass or obscene and, in areas, it shows its age. It can get quite silly at times and repulsive at others, but it’s hard not to find the experience powerful. For me, the film is so impressive on a visual and aural level and driven forward by such a dark and interesting narrative that I can only offer it high praise.

The Devils is out now on DVD from the BFI. Unfortunately, there are still issues with getting it released on Blu-Ray by the sounds of things. The DVD transfer is fantastic though so this is enough to keep fans going for a while longer. Only the last scene stands out as being a bit grainy and hazy. Other than that the film looks almost brand new and the audio blasts out loud and clear. We still haven’t got the totally uncut version as mentioned, but the special features actually give lengthy glimpses of most of the stuff that never made it, so you can piece it fully together in your mind at least.

There are a host of special features over the two discs, including a short introduction by Mark Kermode (the film’s biggest fan by the sounds of things and he features throughout the disc). Also on disc one, we have a fabulously informative yet informal audio commentary with Russell, Kermode, editor Michael Bradsell and Paul Joyce. They do run out of steam towards the end and simply sit and watch the film for stretches, but it’s still a decent chat-track. The UK and US trailers are featured too and the final addition to the first disc is a sweet little early short by Russell called Amelia and the Angel.

Disc two has got a host of behind the scenes and documentary pieces, including the 48 minute-long Hell on Earth, a well-produced (despite the dodgy green-screening at moments) and intimate look back at the film, its production and its problems with the censors. It’s nicely relaxed and very well shot, again featuring Kermode as presenter. It veers into ‘love-in’ territory when Russell and most of the main cast meet up, but it’s a great piece that is clearly made by people who feel strongly about the film.

Also included is a behind the scenes documentary made at the time called Director of the Devils which isn’t quite as carefully put together and spends a lot of time simply describing the plot, but is nonetheless an interesting watch as we get to see the production process as it was and even get to see the wonderful Peter Maxwell Davies work on his astonishing score for the film. Similarly, there is some on-set footage from editor Michael Bradsell, which is awkwardly narrated by himself but offers a further unedited glimpse into the process of shooting the film. We also get an on-stage Q&A with Ken Russell (conducted by Kermode – surprise, surprise) which is entertaining, but not quite as revelatory as some of the other documentaries.

Topping it all off is a hefty booklet crammed with essays and such on the film, which, as ever with the BFI and Masters of Cinema releases, is a valuable companion to the film and other features. It’s an amazing package overall and despite the lack of a Blu-Ray release, it’s a must-buy for fans of the film and especially for those that have never been able to track it down in the past.