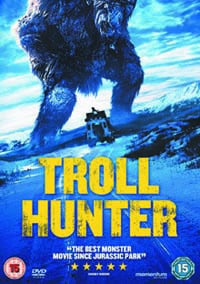 I was desperate to see Troll Hunter after all the buzz it had been generating at various festivals, but somehow managed to miss it on it’s theatrical run. Well, after all the talk has died down and it has been crowned the fourth best film of the year by Blueprint: Review’s writers, could it live up to the hype on the small screen?

For those unaware of the film, Troll Hunter follows a group of media students as they try to make a documentary expose about a mysterious poacher who has been stalking the forests of Norway. However, once they finally track him down and get a look at what he gets up to in the dark nights, they discover a legend come to life. The ‘poacher’ is actually Hans (Otto Jespersen), the world’s only living troll hunter, who spends his time tracking down and controlling the potentially deadly troll population of Norway. Tired of all the bureaucracy and clumsy secrecy, Hans agrees to show the students the real ‘ins and outs’ of his job and they get to discover a hidden world of giant monsters of differing varieties causing havoc amongst the seemingly tranquil surroundings. 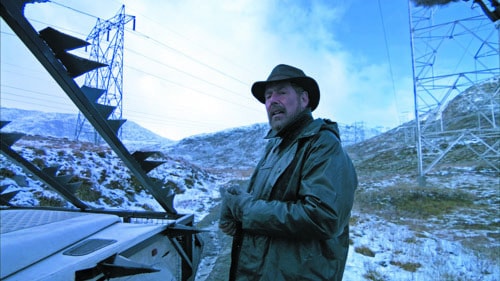 I’d heard a few differing opinions of Troll Hunter actually after it’s UK release. Those of you who listen to our podcast in particular will know that Darren was not a fan at all. However, I really enjoyed the film. It’s strange, as I could see a lot of the flaws that were brought up in our conversation back in September, but either they were too minor for me to care or it just caught me in the right mood, because I had a lot of fun with it. In fact, I probably wrote the least amount of notes whilst watching the film than I have all year. Clearly I would rather watch it than write about it.

The flaws that stood out for me were the usual problems you get with these ‘found footage’ films. Things are filmed that simply wouldn’t get filmed (although the ‘hapless students’ angle helps justify this), the boom operator is never actually doing her job yet we always get crystal clear sound, there are far more cuts and varieties of angles than could have been obtained and the night scenes are far too ‘lit’. These are things that bothered the hell out of me in Cloverfield and The Last Exorcism, yet here I didn’t really mind. The light, comedic tone helped a lot I think. That added to the fantastical nature of it all meant that I was never going to truly ‘believe’ the world was real, so flaws in the ‘documentary’ presentation were less of an issue I guess. Either that or I’ve just gotten used to these problems in these types of film.

Anyway, the format, though flawed, worked for me. Some have argued that it didn’t need to be a ‘mockumentary’ at all, but for me the elements of the students trying to make their film helped add to the charm of it all. It also added a freneticism to the action set pieces and helped show off the ‘realism’ of the impressive special effects. Yes, some of the effects are clearly manufactured in a computer, but on the whole, for a relatively low budget non-Hollywood release they’re fantastic. The varied character designs are brilliant too and they are showcased in refreshingly diverse styles of set-pieces. There is a nice mix of frantic ‘shaky-cam’ action, tense build-ups and epic showdowns out in the open. 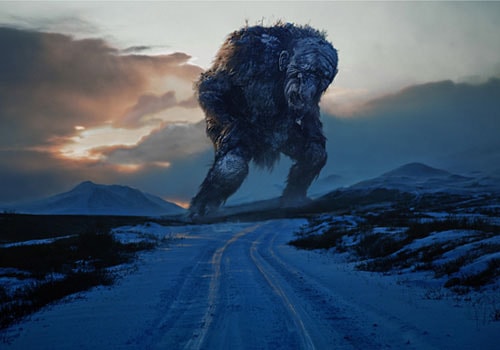 Those big showstoppers were what grabbed my attention and will probably linger longest in my memory, but I also loved the overall tone and humour of the film. It has a dry wit that is generally done straight faced which works in its favour, although a couple of moments (the ‘Polish Painters’ and the troll farting) got a little silly and lowbrow. There are plenty of nice touches throughout, including an amusing running gag of the locals being totally naïve to what is causing all the destruction and livestock slaughter around the area. I found all the mythology and ‘science’ surrounding the trolls and how they lived well delivered and interesting too.

Taken as a whole the film is rather slight – there isn’t much of a story arc and it’s all quite fluffy, but the gorgeous locations, the dry humour, the troll-lore and the extravagant set-pieces all add up to create a well-balanced, vastly entertaining and fresh-feeling experience that I thoroughly enjoyed.

Troll Hunter is out now in the UK on DVD & Blu-Ray released by Momentum Pictures. I reviewed the DVD version and the picture and sound quality was solid. There are quite a few features too, including a trailer, deleted scenes, improvs and bloopers, extended scenes, a visual effects featurette, a short piece from HDNet, photo galleries and a behind the scenes documentary. It sounds like a lot, but most of these are short and not particularly worthy of inclusion. The documentary is decent though and the visual effects piece, although silent, is fairly interesting to see what went into making the extraordinary effects.