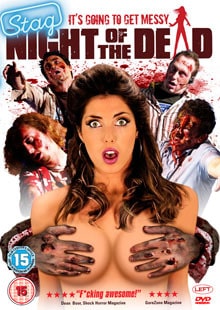 Stag Night of the Living Dead begins with the ritualistic humiliation of Dean, the groom to be, by a stripper his mates have hired for the day, and then follows six of them as they head on to a top secret military base to play ‘Zomball’, which is a rather novel, alternative take on the game of paintball, but this time it’s six friends versus a horde of captive zombies. And instead of paintball guns our ‘heroes’ get to use some funky Taser type guns, which stun the zombies for five minutes at a time.

Apparently some kind of viral outbreak had previously turned a large portion of the population into ravenous zombies, but the outbreak was contained and the military base is where private contractors have come up with money-spinning ways of disposing of the undead, and possibly into researching a proper vaccine, although that’s never made fully clear.

It doesn’t take a genius to work out that poor Dean’s stag night isn’t going to go according to plan as one of the employees of the military base is determined to sabotage proceedings for his own shady reasons, and let the zombies roam free to eat their way across the country. I think the guy wanted to make some sort of political point about the plight of zombies, highlighting their exploitation at the hands of the proletariat, but I may have hallucinated that!

Dean and his rather charmless mates, therefore, have to fight their way out, for real, in order to make it out alive in time for the wedding. That will teach them never to have a stag do the day before the big day! The stripper tags along with them, ready to become the new love interest of the groom to be and this tentative couple are basically the only really sympathetic characters in the film, although the ex-SAS/accountant mate isn’t too annoying either.

I wasn’t really sure what sort of film Stag Night… wanted to be. On the one hand it’s a knock around and very juvenile sort of horror comedy that I could image Kenny Everett trying to put together, should he have made it this far, and on the other hand it seems to be trying to say something about ethics and wider reaching social issues. Like most half decent zombie movies that have gone before, it does pose some interesting questions on human rights through the medium of zombies and whether society has a duty of care to its prisoners etc, blah, blah, blah…

Things I liked about this movie
It came up with a few original ideas such as the whole idea of Zomball with the Taser guns, and having to charge them up while the zombies were out for the count, as was the military enclosure setting and some of the gags were even funny; although the Romero reference wasn’t particularly clever – a newsreader called Georgina Romero…oh, dear, yawn! I did also quite like the final shot though, fairly amusing.

The things I didn’t like about it
The atrocious sound mix – the music was often too loud and the dialogue could hardly be heard at times, which made it seem very amateur – as did some of the acting, which was pretty average at times. The choice of music was a bit strange and, if I ever have to listen to the ‘Dry Bones’ song again, I think I’ll scream. I used to quite like that song, but after hearing it several times throughout this film I just wanted to poke my ears out with a handy door splinter by the end credits! It seemed to try too hard to be wacky with some strained, childish humour, a camp Mr Big, who happened to be a dwarf, and an OTT commander, who came over like Brian Blessed on crack, complete with a cape and very heavy shoes!

And when they could have actually rung some tension out of the clever idea of having the electric guns taking 10 minutes to charge while the zombies were only out cold (excuse the pun) for five minutes, they did nothing with the idea, just larked around.

The main characters were rather clichéd too, with the ‘ladies-man’ best man, Mark, who turns out to be a bit of a cowardly git in the end and Ronnie the DJ, whose a bit stupid and zany and then, for some unexplained reason, on being turned into a zombie suddenly becomes much more clever and leads the zombies in revolt with his new zombie girlfriend by his side (another cool idea wasted). Then there’s the ultra aggressive TC, another friend who’s always on the phone (you could see that joke coming a mile off) and the aforementioned cardigan wearing accountant friend who, it turns out, just happened to be in the SAS in a former existence so knows his way around guns – that came in handy!

At times the film got rather confusing with some ‘players’ apparently being eliminated only to reappear a few minutes later to help save the remaining characters. I think the person in charge of continuity must have taken a long nap for a few of the shooting days or they were making it up as they went along – more likely I think. (Actually it turns out the film was tightly scripted and even storyboarded!).

And finally there seemed to be two styles of shooting running throughout the film that seemed at loggerheads with each other. One the one hand there were some quite nicely shot sequences, which kind of helped to disguise the fact that this was a very low budget affair, and then scattered throughout these are some glaringly different shots, which don’t blend at all with the rest of the film. Plus the final CGI explosions are bloody awful – my tip would be if you can’t do a decent job of the SFX then don’t do it at all – find a work around to avoid having to show them in the first place.

But did you enjoy it, I hear you ask – well sometimes! For a low budget zombie movie it just about held my interest and made me laugh a few times, but I won’t be holding my breath for their threatened follow up film – Hen Night of the Dead!

Left Films have just released Stag Night of the Dead on DVD, so keep a look out for it on the shelves of your local HMV, supermarket or online. There were a variety of extras on the disc I was sent including a not particularly engaging trailer, a fairly unfunny blooper reel (although the first and last scenes are quite amusing), a couple of fairly bland deleted scenes, a stills gallery, a funky ‘how to make a zombie’ music video and a pretty decent ‘making of’ featurette, which was quite informative and engaging.

It appears that the cast and crew are all a good bunch of people and had a lot of fun making the film on a very small budget and with only seven principal days of shooting. It’s sad to think they got turned down for funding by their local film council because what they were proposing to do was too commercial – no wonder the UK Film Council is now defunct with that sort of dumb, elitist attitude!

You can purchase the DVD through Amazon here.