Punishment Park is mockumentary of yesteryear that was originally released in 1971, barely. It seems its content was too controversial for the time and subsequently mainstream press heavily attacked the film. As a result it has lain underground for some time. Now however, to celebrate its 40th anniversary it has its first ever release on Blu-Ray in a newly restored high-definiton transfer. (Which still retains it’s 70’s look!)

The film is set in the desert at a place know as “Bear Mountain Punishment Park”. We follow two groups of young prisoners; one group as they are trialed for their crimes and another as they embark on a three day walk across the desert with no water, chosen as an alternative to a jail sentence. We also follow the police and militia who follow the detainees to ensure their compliance in the task. What we learn over the course of the film is that each of the detainees has been arrested for having alternative political views and… well… not keeping said views to themselves. A crew of British filmmakers has been hired by the jurors to document the fair treatment of the detainees. Ultimately what the film crew uncover is something quite different.

The accompanying leaflet to the DVD mentions the trial of the Chicago Seven as inspiration for the film and it doesn’t take much research into their trials to see the parallels. For example, one of the Chicago seven Bobby Seale, Black Panther Party activist, was bound and gagged before being removed from the courtroom when he called the judge names and accused him of racism. This happens in the film to a similar character. Learning more about the trial of the Chicago 7, helped to contextualise the film somewhat for me, although the knowledge isn’t needed to understand the film.

The film is an interesting one; engaging from the outset I was drawn into the points the young prisoners made about American society and its corrupt government policies. It didn’t teach me anything new, but I was engaged nonetheless and thoroughly enjoyed the often witty comebacks of the prisoners to the “stupid” middle class American jurors.  The most interesting thing for me, however, was the decision to frame the plight of the young political activists and their subsequent punishment in the way that the film did.

The mockumentary for starters is an interesting choice. Absolutely the right genre for the film; by making the events and characters seem real it works to intensify the brutality of the police/army and suppression bestowed by the jurors on the detainees. The style isn’t always handled well though, for example there are moments when the group are shot from a distance in the desert haze. It looks good but I couldn’t help but feel that if the camera crew are following them on this relentless journey why are they not at their side? I guess the next question is… would the film crew also go without water for three days and if not, why would they not give some to the detainees? You might argue “because they are being punished”, but when it gets to the point that one of them cannot walk from dehydration… Really? 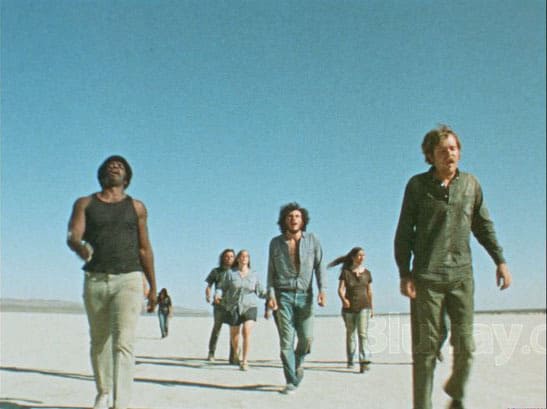 The sound in this film is also worth a mention and works effectively on two levels, At times of tension or high drama there are offensive buzzing sounds or off key jaunts of sound to punctuate the moment, these help set the tone and atmosphere; tension, frustration, anger. Secondly there is what I have affectionately named the “war zone effect” From the outset there is a constant distant gunfire that is never really explained. This gave the effect of a war zone although (as far as I could make out) it isn’t one and interestingly many of the prisoners are anti war protestors, some pacifist and some violent. Sometimes the sound is so intense you can barely make out what the characters are saying. Even the jurors hammer sounds like a gunshot and it is used many times throughout the trial scenes. The “war zone effect” adds to their plight in some way, the relentless gunfire intensifies how helpless they are against the state and how their protests are mostly unheard. Paradoxically the entire film gives voice to the disillusioned young people of the time.

The mockumentary style and the sound were the two things that I thought worked incredibly well in this film. I also thought there were a number of other things that worked, such as the weaving of the trials and the punishment, just the right balance and the editing between the two spot on. Most of the performances were great too tonally right and for the most part really believable. I read that the actors had been pushed to the limit on the film and in some cases the performances were a real reflection of the frustration and anger they felt. Long live the method actor in that case, it worked.

As much as this film grabbed my attention and I was absolutely engaged by it there was one major, major flaw; all the characters are 2 dimensional. The detainees where nothing but one radical political viewpoint after another, the police and army, well two words, brainwashed meatheads and the jury seemed to offer nothing but the stereotypical voice of middle class, suburban America.

The most in depth character was in the film a matter of minutes and his appearance offered the most insightful section for me. It was a conversation between the cameraman and a young soldier who has just shot and killed two of the young radicals. Rather than being completely unaffected by the murder he has just committed (as all the other soldiers/police are) he shows humanity and remorse for what he has just done through tears and a look of regret. At the same time he is defending himself saying, “the gun just went off they were throwing rocks what was I meant to do?” His humanity/morality is in conflict with his training to react to conflict with aggression. Complexity of this kind was not extended to the other characters, they had one thing to say and said it over and over in a number of ways. That isn’t to say the arguments presented by the students were not complex and worthy of the time, they were, but unfortunately due to the lack of humanity that was shown it made it very unbelievable and for me provided a barrier from the drama that was unfolding. I didn’t feel invested enough in the characters, (it was the sound that was making me feel the intensity) and therefore I didn’t care when they died and this meant the cause they were fighting for was lost to a degree.

At the time the film may have been extremely radical and would certainly put voice to young Americans who were disillusioned by their government. This one sided argument, it seemed, was strongly felt, indeed this wasn’t the only radical film made around this time, the DVD leaflet mentions Robert Kramer’s Ice (1969) and Haskell Wexler’s Medium Cool (1969). It may have been needed then and I can appreciate that, but it doesn’t stop me wanting a more rounded debate. I want real arguments from the opposition (jurors) to gain a full perspective; I know they don’t provide the full story. I want more in depth characters, especially from the police/militia, like the boy who sheds a tear. I want the political characters to show a little more humanity not on a general scale, they certainly talk about that enough, but on a personal one. It really would have added significant weight to this film and would have made it one of the best films I have ever seen had it done so. Very frustrating!

I wonder where the radical students, the film gives voice to, are now… were they silenced as suggested or have they succeed in making some difference in the world? OR Do they have highflying well-paid jobs? Have they become the “upstanding” members of society they so despised?

Punishment Park is out now on Dual Format DVD & Blu-Ray as part of Eureka’s Masters of Cinema series.