As you would expect this is a nice, quiet game where you collect flowers, stamps and little cuddly, fluffy things that wouldn’t say boo to any kind of creature.

Of course it isn’t like this at all. As game names go, All Zombies Must Die (AZMD) is a very much does what it says on the box it would come in, if it weren’t a download only game.

As is the way in games, TV shows and films the setting for the game is that there has been an outbreak of something pretty nasty and therefore zombies are coming out of the ground. Does this mean they are the undead? We’re not sure and not that up on all things zombie to be honest. The world is a mess and bridges have collapsed and things like that, which is all you really need to know.

AZMD is a top down, multi-player shooter (up to four players co-op) and the levels are nicely detailed in a kind of comic style rather than being ultra realistic. The design is very much like Rare games of old, such as Grabbed by the Ghoulies for the original Xbox.

What makes AZMD more interesting than many games are the jokes and humour that run through it. The script and the dialogue poke fun not just at the structure of games, but also that of disaster movies.

In one section where you have to fight a boss in a closed off section that you can’t escape until you have defeated it, the main character, Jack, remarks ‘this feels very video-game like!’ He’s not wrong 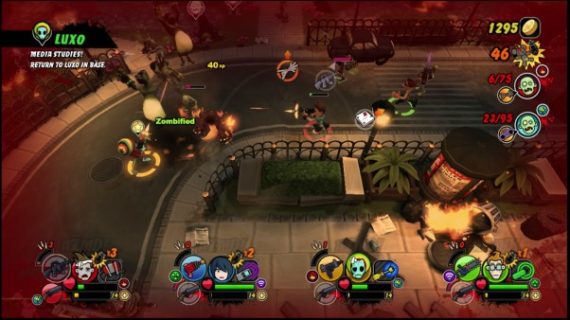 Along with the witty dialogue, the plot revolves around Jack, who along with having to defeat lots of zombies is, of course, trying to impress his ex-girlfriend, Rachel. The developers clearly played a lot of zombie games and watched a lot of zombie films. This humour makes the game great fun to play as it, for once, doesn’t take itself at all seriously.

This includes cheeky boundary robots that set you tasks such as killing a set amount of zombies before you can get out and talk back to you in a way that only robots seem to be able to do.

AZMD has an XP system for levelling up and you get XP for completing set mission goals and of course for killing the endless hoards of zombies. When the zombies die they can also drop things such as silver coins, ammo or food.

Why they would be carrying any of these items doesn’t make sense, of course, but the fact that you eat the food to increase your health just sounds disgusting. The health (food) that they drop does look good though; nice, fresh, juicy burgers.

Most of the time you will be up against rank and file zombies that come out of the ground all the time. Despite all the weapons you can pick up, nothing is better for despatching these than your fists. The cricket bat, shotgun and multitude of other weapons are best saved for the bigger ones, the bosses, that you don’t really want to get near. 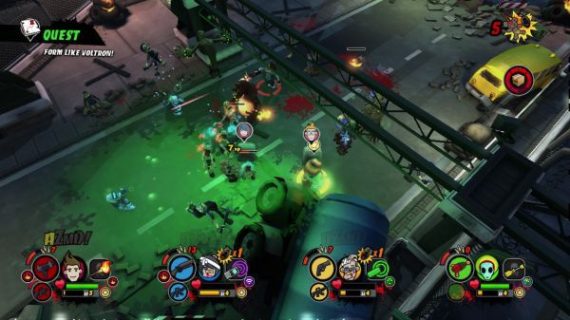 You don’t want to stand still very often though as you will simply spend all your time bashing wave after wave of zombies. Yes you will get loads of XP, health, ammo and silver coins but also sore trigger fingers after a while. Plus you don’t really need to kill that many to progress anyway.

Dotted around the wonderfully detailed maps are hidden treasures. These can be extra XP to help you level up and get new stuff, or they can be special weapons, mega-health packs, ammo or money. You need to be careful when you find these as you have to hold down X for a few seconds to open them, leaving you vulnerable to attack.

Before we played All Zombies Must Die we simply thought it would be yet another boring zombie-fest and so were pleasantly surprised that we actually enjoyed playing it, which was nice. OK so it won’t win game of the year and no it doesn’t have the most amazing script, sound, design or gameplay, but it is fun and doesn’t cost much. Certainly worth a bash.

Review by Tuckski for BCS.