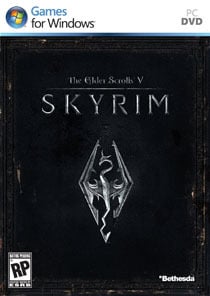 We’ve been scanning our dictionaries here and we can’t find words to describe how excited we’ve been at the prospect of Skyrim. If we were allowed to invent a word, we’d say we were electrixcited (el-ec-trix-cit-ed: 1.adj State of electrixcitement; electrified excitement; equivalent of excitement charged by one million volts: he was electrixcited to receive his copy of Skyrim).

The Elder Scrolls V to some, Oblivion 2 to many others, it doesn’t matter what you call it. In turns one of the hottest, and coldest, releases of 2011, Skyrim is here. Bethesda’s first fantasy open-world RPG since 2006’s Elder Scrolls IV: Oblivion.

Set 200 years after those events in Cyrrodil, Skyrim shifts the focus north where lush, verdant meadows and glistening lakes are replaced by bleak, craggy tundras, ice-cold, crashing waterfalls, and snow. Lots of snow.

For those not in the know, Skyrim, like Oblivion, is an open-world RPG, set in a huge, free-roaming fantasy world where nothing is quite as it seems. In Skyrim’s case, there are four main cities throughout the land, plus seven or eight towns and numerous outposts dotted about the place. 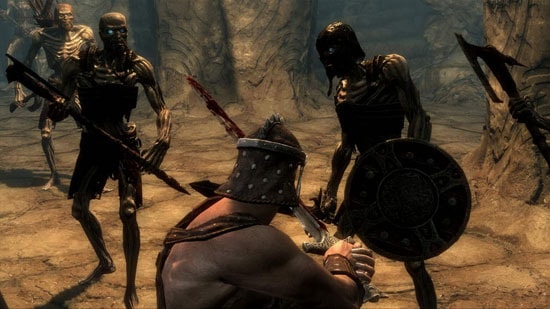 Hundreds of folks populate this world. Some good and, naturally, some not very nice at all; it’s up to you, bold hero, to work your way up and around the game’s many story threads and ultimately rule the land as King or Queen.

It’s not just humanoids you’ll be interacting with either. As well as passive wildlife (such as foxes, rabbits and deer), there are meaner creatures in the form of wolves, rats and huge spiders looking to take a chunk out of you. Oh, and has anyone mentioned dragons yet? There’s a load of ‘em in Skyrim and, when you meet one for the first time, the hairs on your arms will go up. They’re epic.

As well as being epic, they’re also mean bar stewards and will swoop down and attack you as soon as look at you. They’re by no means easy to defeat, but by jongo the battles themselves are as thrilling as anything in the history of gaming.

How these entirely non-scripted events (with the exception of the first one) manage to play out like a scene from a film is staggering, such is the fluid and ‘real’ behaviour of these beautiful, ferocious monsters.

If and when you do get round to killing one, you’ll absorb its soul. We won’t say why, as that would spoil things (there are a ton of spoilers we’re omitting in this review) but these will come in handy for the ‘shouts’ you’ll also be learning on your travels. 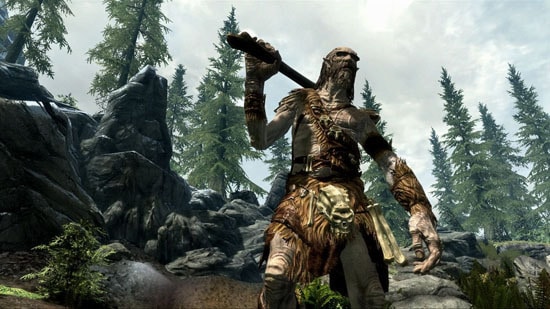 As well as the magic spells you may or may not learn along the way (it depends on your play style, they’re entirely optional, but recommended!) these shouts are learned phrases in the language of dragons.

Learn a word by finding it scrawled on a wall or floor, usually at the arse end of a huge dungeon, activate it with a dragon soul and you get a super ability unlocked for infinite use, although each has a cool down period. Each shout can be complemented by two other words of the same category, effectively meaning each has three ranks.

Rather than feeling tacked-on to Oblivion’s established skill set structure, shouts add a very welcome string to any adventurer’s bow and can get you out of many a scrape when you’re up against a particularly tough opponent.

While weapon-based combat is largely similar to Oblivion’s, enemies are now cleverer and won’t just stand there trying to knock your head off while you dance around like Ali. They’re more strategic now, as enemies try to find a good position as well as try to avoid your attacks. Shrewd use of weapons, magic and shouts can turn any battle into one of wits as well as brawn, which is again a welcome change to Oblivion.

The one complaint we would have with the combat is the stop-start nature when changing what you’re using in each hand at any one time. Sure, you can allocate a hotkey item to your left and right hand, but when you want to switch back to what you were holding before, or anything else, it’s a case of pausing and scrolling through a list to find them.

A favourites option helps here, but there are so many items to favourite, it’s still a bit of a scroll-a-thon when you need to quickly be swapping items about mid-combat. 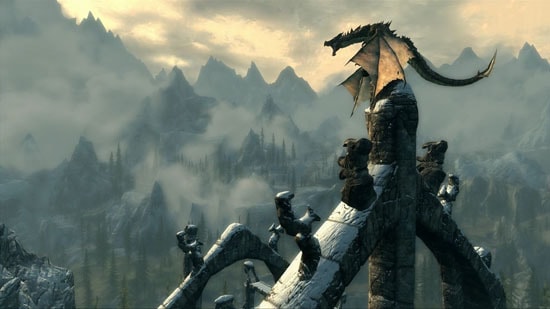 It’s a very easy thing to forgive and we only point it out because Oblivion’s quick-select spell wheel worked so much better, so it’s mystifying to see it gone now.

While certainly not dumbing anything down, Bethesda has clearly tried to take the focus away from the hard stat screens of old and replace them with more symbolic indicators. Levelling up is now a simpler affair and the reward is twofold.

First, you get to boost Health, Magicka or Stamina, and then you get to choose a perk, based on 18 talent trees taking the form of constellations. You’ll see no strength upgrades here, just more unique talents such as dual-wielding destruction spells or increasing the damage done by certain weapon types.

There are also several ways to craft and improve items, such as smithing, cooking, alchemy and tanning. Unfortunately these do feel a little forced and serve as pretty pedestrian low points when there is such rip-roaring adventure to be had in every other part of the game. Still, it’s optional and easy to ignore, unless you’re that way inclined of course.

Stunningly good, then, Skyrim has managed to surpass even our own head-spinning expectations. There’s simply never been a single player adventure as epic as this absolute must-own masterpiece. We cannot recommend highly enough a visit to this magical, breathtaking world that the magicians at Bethesda have somehow managed to fit on one little silver disc, just for you.