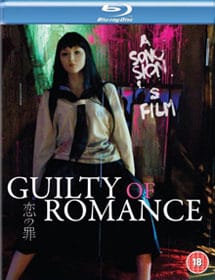 Sion Sono draws his ‘hate trilogy’ to a close with Guilty of Romance. From what I’ve heard there is little in common between the three films (Love Exposure and Cold Fish are the first two – neither of which I’ve actually seen so I can’t comment), but nonetheless Guilty of Romance is clearly the work of the maverick Japanese director behind oddities such as Suicide Club and Exte. This is more serious in tone than those two films, but retains the dark, twisted and occasionally baffling take on it’s subject matter.

Guilty of Romance opens with a female police detective arriving at the scene of a brutal murder where the body parts of a woman have been attached to those of mannequins to create two creepy human dolls, and neon pink paint has been splashed around the seedy surroundings. Body parts that could be used to identify the victim (head, hands and feet) as well as the sexual organs are missing though so the detective heads off to investigate. This classic murder mystery aspect is pretty much left there other than a few glimpses in the version I saw. The film has two cuts, the original 144 minute Japanese one and a shorter international version. This 112 minute cut pretty much removes the detective story whereas the longer one retains it. Both cuts have been endorsed by Sono, so I can’t see a need to get too worked up at the UK release being shorter. In fact what little we see of the detective story is bland and fairly unnecessary in my eyes anyway so I’m actually pleased I got to see the international version. 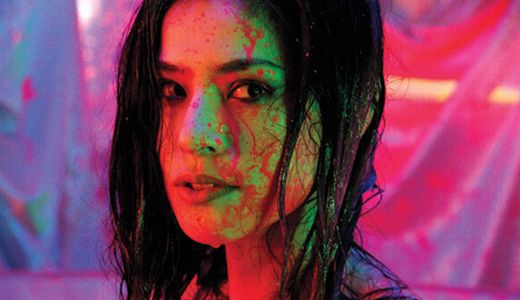 Anyway, away from discovering who the body belongs to and how, why and by whom they were killed, the film largely follows the development of Izumi (Megumi Kagurazaka), a devoted yet bored housewife to a famous romantic novelist (and possible victim in the murder). Her husband is an emotionless perfectionist whose home life sticks to a rigorous routine that Izumi is expected to adhere to. Seeking something to fill the void, Izumi takes on a job at a supermarket selling sausages (a cheap but amusing metaphor for what is to come) where she is approached by a modelling agency. The modelling becomes a porn shoot and although reluctant at first, Izumi blossoms in confidence and sexuality through this secret life. So far, so Belle De Jour. However, Izumi starts to spread her wings and cruises the ‘love-hotel’ districts where she is enticed into having sex with a peculiar young man who abuses her and comes close to letting her husband know her secret. After this ordeal she meets Mitsuko (Makoto Togashi), a friend of the man’s and literature lecturer by day, prostitute by night. She takes Izumi under her wing and pushes her into the world of prostitution. Again Izumi is rather reluctant, but sees something special about Mistuko and feels compelled to follow her and be like her. Of course this all descends into chaos and darkness as we wait to see which of these women will meet the grizzly fate we are shown in graphic detail at the start of the film.

Guilty of Romance is an odd beast and one that I still haven’t fully wrapped my head around. Some have called it misogynistic, but I don’t think that’s the case. I think it’s a dark satire on those ideas and others surrounding female sexuality. As with the other films I’ve seen from his canon, I think Sono is trying to say too much so it’s not clear exactly what the key ‘message’ is, if there is one. Izumi’s constant shift of character doesn’t help, as one minute she’s being forced into doing something humiliating or degrading and the next minute she’s actively seeking out something similar.

In amongst all of this are references to a Ryuichi Tamura poem (On My Way Home) and Franz Kafka’s The Castle. The poem speaks of the baggage of meaning and language – “I should never have learned words, how much better off I’d be, if I lived in a world, where meanings didn’t matter, the world with no words”. Kafka’s The Castle tells the typically Kafkaesque idea of someone caught in a futile attempt to search for something they can never find. This suggests Izumi is searching for a meaning or fulfilment in her life that simply isn’t there or can’t be found. The final scenes (spoilers ahead) where Izumi roams the streets with no shame or decency, urinating in front of children and throwing herself into the sex trade with no passion or respect anymore suggests that she has given up and simply “stand(s) still inside your tears” as Ryuichi’s poem puts it. This bleak coda does end the film on a powerful, solid platform, but the previous scenes that make up the narrative’s finale, where the horror of Izumi and Mitsuko’s lives reach their violent and convoluted conclusion are much more messy.

Away from the film’s various interpretations, from an aesthetic and technical standpoint the film is very impressive. The bold neon colours of Japan’s seedy underbelly are used to their full extent and are powerfully contrasted against the minimalist pastels of Izumi’s home life and the warm, bright light of day. Equally as impressive is the soundtrack. Sono makes powerful use of classical music in the more potent scenes of sex and violence. OK, it’s not a new technique, but it’s done very well. Added to this there is are frequent drones and industrial noises in the background that effectively crank up the tension and the grinding repetition help reinforce the intense claustrophobic atmosphere.

Guilty of Romance is an interesting and disturbingly captivating film. It goes off the rails now and again, especially towards the end and it can be quite puzzling, but it remains potent and worth giving a try if you’ve got the stomach for this kind of thing. A little messy maybe, but always engrossing.

Guilty of Romance is released in the UK on DVD & Blu-Ray on 28th November by Eureka. I was sent the DVD version and the sound and picture quality are decent, although the blacks suffer a little from time to time, lacking strong contrast, leaving a few grey patches with occasional digital noise. It’s not noticeably bad though and generally it’s a strong transfer.

Features-wise we have a 37 minute interview with star Megumi Kagurazaka, which starts off straight forwardly enough, but becomes very interesting as it progresses. She talks about her background, how Sono works and even goes into her thoughts on the themes of the film and the importance of Franz Kafka’s The Castle. There’s also a commentary from Japanese cinema expert Jasper Sharp. He’s not that confident to begin with, throwing in a fair amount of ‘ums’ and ‘ahs’, but he eases into it after about half an hour and clearly knows his stuff, so it remains very interesting. He talks about Sono’s other work, background and some similarly themed Japanese films more than the film itself which was a bit of a shame though as I’d have liked to hear his interpretation of Guilty of Romance. I’m always interested in other Japanese films that are out there though so I was kept engaged. He stops 16 mins before the film ends, which was a surprise, but not necessarily a problem. He doesn’t feel he has more to add which is better than padding it out for the sake of it.