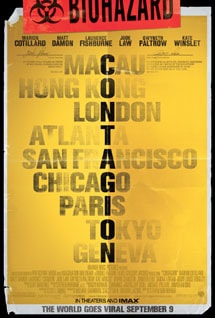 Directed by the prolific Steven Soderbergh (Erin Brokovich, Traffic, Che, Oceans 11,12,13), Contagion has a host of Hollywood stars and a disease that threatens the entire planet. However as you might expect for Soderbergh, his vision isn’t a Roland Emmerich man vs virus rollercoaster ride, but a more grounded, character piece.

For Contagion plays out more like a low-key, and worrying, public service film. Written by Scott Z Burns (The Bourne Ultimatum, The Informant), it doesn’t seem interested in using creative licence to up drama or suspense. Instead it prefers to stick to a – much more frightening – realistic “what-if?” approach. What if the right toxic mix of influenza broke out in a modern world? What would really happen and how would we succumb and tackle it? 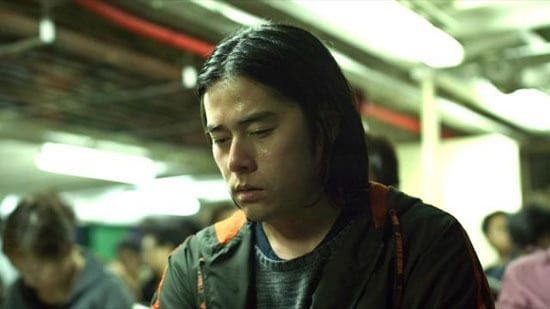 Contagion is an ensemble piece with stars like Gwyneth Paltrow, Laurence Fishburne, Matt Damon, Kate Winslet, Jude Law, Marion Collitard and more… and begins at day 2 of the outbreak – when the virus has already been ported to several countries from a busy Hong Kong casino. Altogether Contagion concerns: a regular family battling loss and trying to avoid further infection; senior scientists at the CDC and other organisations struggling to find the source, contain the spread and crack the virus and bureaucracy; and a popular hack blogger, his profiteering and conspiracy theories.

Moral questions join bureaucratic and medical struggles as the mystery flu virus spreads quicker than it can be contained and figured out – and infrastructure buckles.

As the flu spreads and claims victims – no star is safe – Soderbergh also explores human parallels, such as the spread of secrets, panic, scaremongering and then disorder in quarantine. Those in the know are entrusted to keep the dangers secret to avoid panic – including from loved ones (but can they?) – and the virus is so complex that creating a vaccine proves a lengthy struggle. 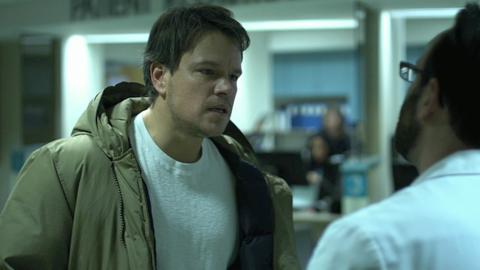 As the days progress Soderbergh subliminally shows why a modern, crowded world is vulnerable to viral contagion. We learn we touch our face thousands of times a day and are regularly reminded of all the things we put our hands on in every day life by frequent close ups of elevator buttons, bins, handrails and each other.

There is a fair amount of techno-speak, but it is kept to a minimum. By the end you will know well what the R-nought scale, as well as the difficulty vaccine mass-production logistics.

The end result? It’s not a popcorn eater, but the concept is very well pitched and achieves what it sets out to. It isn’t mind blowing and the story is more pervasive than narrative, following sections of each character’s life as contagion spreads and the world tries to cope. While each storyline is eerily plausible, the effectiveness varies – Marion Collitard’s tale feels like an add-on and Matt Damon, Laurence Fishburne, Jude Law and Jennifer Ehle dominate – but the seam that unites them is engaging due to its tempered, realistic real.

With our population rising to 7 billion, Contagion feels like an eerie premonition. It suggests a perfect viral cocktail is not a matter of if, but an eco-biological matter of when. It doesn’t overblow it or scream it. It just calmly states it is out of our hands.

At halloween time, this is probably the most frightening piece of fiction of them all.