Due to Lake Mungo finally getting a DVD release in the UK this week I thought I’d bump up my review written back in 2009 when I caught it at Sheffield’s Celluloid Screams festival. 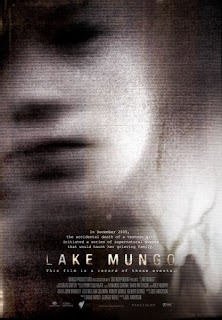 Lake Mungo kicked off the Celluloid Screams festival, and what a start. It’s a (fictional) documentary that charts a family’s grief after the loss of it’s teenage daughter who drowns in the local dam. After finding her body and burying her, the family witness a series of bizarre and inexplicable events that lead them to believe that her spirit is still among them.

What sounds on paper like quite a cheesy horror film is actually more of a slow-burning drama that is creepy and has it’s share of frights but is also surprisingly touching and intelligent. The story takes some very interesting turns as it progresses, which jar at first, but as events unfold it all makes sense.

It really is an impressively controlled affair, especially coming from a first-time writer/director, and is possibly one of the most effective uses of the pseudo-documentary format that I’ve come across (bar Spinal Tap, but that’s a whole other type of film). It doesn’t do anything half-baked like District 9 which gives up on the documentary format half way through, or like Cloverfield which is way too glossy to feel like ‘found footage’. Lake Mungo uses a classic documentary format, i.e. talking heads mixed with primary sources and classily shot location footage after the event, and sticks to it, which makes the story feel truly real and truly personal. The believable performances help cement this too.

I really hope this gets a proper release (nothing is listed in the UK on IMDB) as this is mature, dramatic horror that deserves to be seen.