There has been a distinct lack of horror games released in the run up to Halloween in 2009. The end of October has been and gone and those looking to get their fill of scares and shocks have been left with very little choice other than Ju-On: The Grudge, exclusively on Wii. Does it have the right ingredients to carry the flag single-handedly for the genre this year?

Dubbed “A Fright Simulator” on the somewhat laughable cover, Ju-On: The Grudge has obviously been designed with the intention of scaring the player at every opportunity. “You’ll jump, laugh and cry… perfect fun!” claims a quote positioned underneath a picture of a girl cowering behind a brown leather seat. You will jump, you will laugh and you will cry, just not necessarily in that order or for the right reasons.

‘Ju-On’ is, apparently, “The name given to curses born from the intense hatred of those who die by violence. Any person who comes into contact with one of these grudges is doomed to die, along with those they hold dear.” With this in mind, you begin the game by selecting your gender as well as your star sign. If it holds any particular relevance, this review is being brought to you by a taurean male. The reason for this input is that after you clear each section of the game, there is a comment regarding your performance based on these factors.

The first scenario begins with a dog, Ivy, wandering into a rundown factory. With no sign of your pet returning, as Erika you proceed into the factory in order to retrieve your companion armed with a dreadfully weak torch.

If you have not been to the Instruction Manual by this point, now is the perfect time to open it up and find out how to play Ju-On: The Grudge as controls are not explained in-game. The B Button is used to move forward, Down on the D-Pad will move your character backwards and the A Button is used to interact with items and doors. The pointer, unsurprisingly, is used to direct the light emanating from your torch and to turn your character.

Pressing B for the first time reveals the first scare of the game. Erika moves at such a slow pace that you wonder if she really cares about finding her dog, and this issue of speed is true of each of the characters you play as throughout the course of the Ju-On: The Grudge. Although this was presumably an attempt to add to atmosphere of the game’s locations, it only hinders your enjoyment of the whole experience.

As you creep forward with the flashlight in your hand, you’ll inevitably realise just how bad the controls are in general. Moving the torch does not feel anywhere near as tight and responsive as you would like and it can often be a frustration just trying to get your character to turn. Something that should be so simple has been implemented so badly that you can only hope you get to grips with it and focus on the more interesting aspects of the game.

You will notice a battery at the bottom corner of the screen gradually depleting as you progress through the dark rooms of the factory. With that in mind, you would expect your character to want to hurry around to find her dog before being left in total darkness. Unfortunately, you are restricted to same slow, lacklustre pace for the entire game.

The problem is that if you run out of battery power, it is Game Over and you have to restart that episode from the beginning. There are no checkpoints to speak of and nothing will have changed since your previous trek through. All of the ‘shocks’ will occur in the same places, and in the same way, whether it be seeing a child that screeches like a cat or fleeing a ‘curse’.

A ‘curse’ chases you around for a few seconds and the only way to evade it is to perform a series of actions with the Wii Remote. These actions, however, lack any imagination and there is very little variety in the form these scenarios take. Arrows will appear at the edge of the screen and you have to move the Wii Remote in the direction specified to help your character run away from the ‘curse’. It doesn’t feel particularly responsive and often seems a little messy, but if you do the actions successfully, each arrow will turn green and if you fail they will turn red.

A red arrow is something you do not want to see. Failure to carry out the necessary action will result in death and the episode will have to be started again from scratch. This might not be such a problem if the episodes were any fun to play, but each one basically boils down to collecting batteries scattered throughout the environments to keep your torch alive and the odd key required to open a few locked doors. The only real change comes in Episode Four where you collect ‘Alkaline Batteries’ instead of the standard ‘Spare Battery’. They’re a different colour and everything! 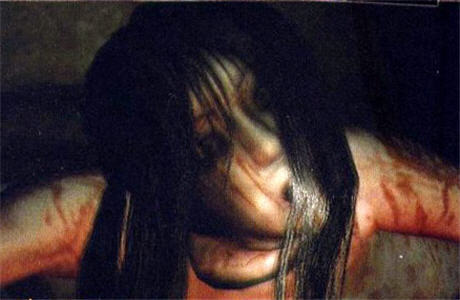 Although there isn’t much to do in each of the episodes, Ju-On: The Grudge almost does a respectable job of creating a disturbing atmosphere with its dark and creepy locations home to some slightly unexpected events such as objects seeming to move of their own accord. Nothing in the game is ever particularly frightening though.

It is possible for a second player to join in and press a button to trigger an event on-screen in an attempt to scare Player One. These actions can only be performed with a period of at least 15 seconds between each scare, but all they do is slow the game down further.

Although the graphics are not terribly strong in their own right, particularly apparent from the brief preludes to certain episodes, they do look relatively good under the blanket of darkness with only the torch providing illumination. The light reflects quite well off objects and shadows are cast appropriately.

There are, however, several problems in this department. There are occasions when a wall will not have loaded as you enter a room, meaning that you can see everything in the room behind the wall before it is blocked from sight, and also times when it will go completely pitch black when you go through a door before the environment suddenly flashes into view. The ‘action’ also freezes a couple of times when the game is trying to load and you wonder if it actually is loading or if there is genuinely a problem with the game.

Additional problems include the fact that you can only pause the game to read a description of the scenario you find yourself in. There is no menu available to take you back to the main menu or to restart the episode if you think you may have missed something and won’t have enough time to make it back before your battery runs out. Therefore, you must reset the game in order to return to the Main Menu.

The sound effects in the game are adequate but don’t do anything to really enhance the experience. Generally all you can hear are your footsteps as you walk along and music only really kicks in as you open a door or if your character’s attention is being directed towards a place of interest. Unfortunately, when something ‘scary’ is about to happen, you are often taken out of control as the camera takes over to highlight what is happening. It is a technique that takes you out of the experience a little and basically gives you a warning that something is about to happen. This ruins a large amount of shock factor, an element a game of this nature sorely requires.

Although the environments and general idea behind Ju-On: The Grudge show some potential, the game ultimately fails to deliver the spooky experience that horror fans are crying out for. The game is over very quickly, only lengthened by the infuriating and exceedingly slow pacing, and there is very little fun to be had throughout the duration. Whether you appreciate horror games or not, Ju-On: The Grudge is one to avoid, particularly now that Halloween is over.

Reviewed by Gregory Moffett at N-Europe.com