Is it a bird? Is it a plane? No! It’s another sub-quality superherovideogame! Apologies for this clichéd opening, but it’s hard to muster much enthusiasm for Iron Man: The Official Videogame when the developer and publisher appear to have made so little effort themselves. The latest in a long line of superhero-themed disappointments, Iron Man on the Wii is everything you probably feared it would be i.e. not very good!

Unless you’ve been living under a rock (‘Holy cliché, Batman!’) you probably know that the Iron Man movie is currently storming box offices around the globe and, as is tradition, there’s a videogame tie-in prepped and ready to cash in on the publicity. Before delving beyond the loading screen, let’s get one thing straight – Iron Man is (potentially) a fantastic character to base a game on. He looks cool, he can fly (always a bonus!), he’s got weapons coming out of his ears (almost literally) and he can pulse energy out of his hands. If videogames are all about wish-fulfilment, then assuming the role of Iron Man should tick any number of boxes. However, as Uncle Ben (Spiderman’s Uncle, not the purveyor of rice products) will tell you, ‘with great power, comes great responsibility’ and we’re sorry to say that Sega have been more than a tad irresponsible with the licence’s potential.

It doesn’t take long to realise that Iron Man: The Videogame is a slap-dash affair. Although the opening cinematic features passable likenesses of the film’s cast (with Robert Downey Jnr fairing particular well), the grainy, low definition clips wouldn’t look out of place on YouTube. This low budget ethos is carried into the meat of the game, leaving you not so much under-whelmed as completely indifferent/borderline angry at the barrage of mediocrity that developer Artificial Mind and Movement throw around your TV screen. 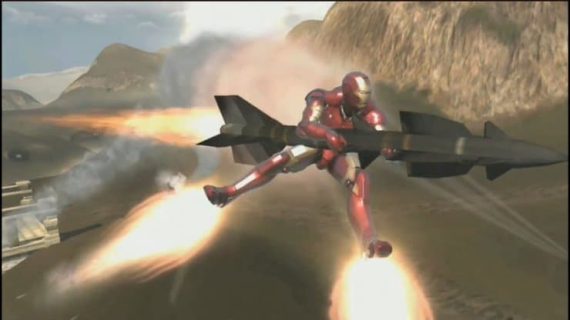 Graphically, this game is abysmal. Draw distances are shockingly poor, with a shoddy attempt to disguise this in an early level with a sandstorm failing miserably. The whole game, from Iron Man himself to the environments and enemies are rendered in such grainy, muddy detail it is at times hard to believe that this is a current-gen title. Although the Wii is not a console that needs to rely oncutting-edge visuals to impress, the likes of Super Mario Galaxy and Metroid Prime 3: Corruption have proved that it is more than capable of wowing in the graphical stakes. Where those titles were polished to the Nth degree, Iron Man: The Official Videogame is about as crudely crafted as they come.

Equally turgid is the gameplay. The opening training mission has you flying through rings (or should that be ‘jumping through hoops’?), and then it’s on to the main event… shooting some crates! If you manage to succeed in all this (whilst staying awake), your next thrilling task is to follow a truck (a task that proves to be as dull as it sounds). Now, these simple synopses of the levels do overlook the small matter of the bad guys, but this isn’t much of an oversight however, as Iron Man’s foes are about as menacing as a soggy biscuit and show about the same level of intelligence. Picking off soldiers and tanks with your repulsor ray is about as enjoyable as logging on to Microsoft Windows, but without the practical functionality. Even the end of level bosses offer no challenge, their tendency to wander around the arena of combat like Robot Wars-rejects making them little more than mobile targets. Trudging trough the levels, enemy after enemy collapses into a heap of indifference before your galvanised fists, and token Wiimote-waggling fails to break up the monotony. 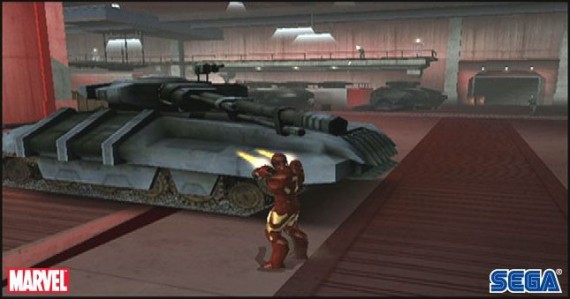 Control-wise, ‘Iron Man’ is passable at best. Using the Wiimote to target and destroy your enemies works well enough, and manoeuvring Iron Man is generally trouble free. Unfortunately, a terrible camera and countless invisible walls overshadow even this small victory. Thrusting into the sky only to bounce off an unseen barrier manages to suck any remaining feelings of empowerment out of the experience, a fact that is further aggravated by the dead-pan mutterings of Jarvis (Iron Man’s onboard computer – think K.I.T.T. from Nightrider, but without the personality). For a supposedly open-world game to hinder your options so severely is unforgivable. For the game to then berate you for trying to explore merely rubs salt into the wound.

If all of the game’s largely stale ideas, the management of your suit’s abilities is the most interesting. Diverting energy to your weapons, armour or propulsion systems shows Artificial Mind and Movement making some effort to engage with Iron Man as a character, but the impact of this on the rest of the game is marginal at best. Shifting power from one system to the next in reaction to the ebb and flow of battles could have worked very well, but unfortunately the game’s combat is so mind-numbingly dull that the system does little to lift the experience and eventually proves to be yet another annoyance.

It may sound that we’re being overly harsh on the developer’s efforts, but the sad truth is that this is a car-crash of a videogame wrapped up in the protective suit of the ‘Iron Man’ movie licence. Sub-standard in almost every facet, and bog-standard in the rest, it is a game that frustrates, depresses and bores, but very rarely entertains. The Wizard of Oz’s Tin Man eventually found a heart, but those looking for one in Iron Man: The Official Videogame will be left sorely disappointed, as it simply doesn’t have one. This is one game that deserves to be left to rust.