Unleashed (otherwise known as Danny the Dog) was a film I was desperate to see when it first got announced, placing martial arts movie legend Jet Li in a Hollywood film with a solid cast and a writer/producer (Luc Besson) that knew how to make a quality action film (Leon, Nikita etc.)  When it finally got released though it was hit with some quite lukewarm reviews and wasn’t massively successful, so it seemed to pass me by somehow.  I finally decided to rectify things and sit down and watch it on DVD four years after it’s release and I was pleasantly surprised.

Unleashed throws us into a seedy British underworld where debt collector Bart (Hoskins) has trained a semi-mute slave Danny (Li) to beat the living hell out of anyone he pleases by releasing a dog collar he uses to control him.  Danny eventually escapes his captor and ends up living with a kindly old blind piano tuner (Freeman) and his step-daughter (Condon).  This pair manage to open Danny up to become a real person and not an animal, until of course his demons come back to haunt him. 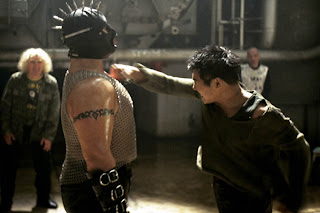 The film to me seemed to be aiming at replicating the success of Leon, in that it’s at times a brutal, stylish action film but at others a touching drama.  Unleashed is not as successful at this it has to be said, but it still does pretty well.  The action scenes are bone-crunchingly brutal and are the strongest elements of the film, with some impressive choreography from the master himself, Yuen Wo Ping.  The scenes with his new family are not quite as impressive, but they’re much better than I expected.  Jet Li delivers his finest English language performance, displaying an impressive range and delivery despite the language barrier.  Bob Hoskins makes a great villian and Morgan Freeman is solid as always, but doesn’t fire on all cylinders.

It’s not a perfectly balanced film and has it’s silly and schmaltzy moments, but nonetheless it’s an effectively entertaining and well made film that deserves more respect.