Year: 1957
Director: Ingmar Bergman
Writer: Ingmar Bergman
Starring: Max Von Sydow, Gunnar Bjornstrand, Bibi Andersson, Nils Poppe, Bengt Ekerot
I’ve been living in fear of The Seventh Seal for a long time.  I’ve attempted to watch it on around four occasions and never got further than a minute or two into it before I’ve given up.  I think it didn’t help that before recently I’d never seen an Ingmar Bergman film.  I’d always read so much about how serious and important his films were that I just didn’t have the patience to sit through any of them, thinking I’d be bored to tears.  Finally, for who knows what reason I decided to watch The Virgin Spring and I loved it, which opened up the floodgates for me, prompting this review as my subsequent Bergman fix.  Speaking of which, reviewing this film is another fear I’ve had.  What am I, lover of trashy kung-fu films, going to say about one of the highest regarded art-house films ever made?

Lets start with the plot; The Seventh Seal is all about death.  The central element (and most famous) follows a knight returning from the crusades who is having a crisis of faith when he is confronted by Death himself, telling him his time is up.  The knight, who still wants answers on the existence of God before he dies, challenges Death to a game of chess for his life.  The rest of the film concerns the fears and turmoil surrounding a plague that is ravaging the country and casting the shadow of death over everyone and everything. 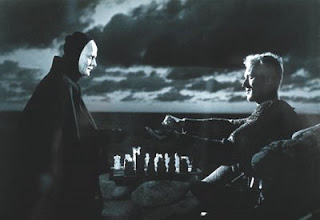 Well, after finally forcing myself to watch it I must say I was surprised.  Not surprised by how good it is (it is brilliant), but by how entertaining it was.  OK, it’s certainly not a laugh-riot and it’s a million miles away from the fun I get from a Jackie Chan film, but it’s not the tedious, ponderous tosh that I originally expected.  Buy Lasix Online Pharmacy No Prescription Needed It is about death and religion so is heavy going, but Bergman keeps the running time lean and doesn’t waste time along the way.  There’s even a bit of farce thrown in there too.  There are numerous main characters with very different outlooks on life which make it easy to find someone to relate to, although the film works best as a thought-provoking piece by displaying how all of these sides to the debate have a point and there are no easy answers.  It really is a fascinating film that probes the darkest but ever-present questions man has of life and death.

It’s also a beautiful film, with some stunning use of lighting and locations.  Some of the imagery will stay with you forever, some of course is already so parodied that it’s lost some of it’s effect, but it still holds its own and the scenes with Death are among the most memorable moments despite bringing up thoughts of Bill and Ted.

The performances are fantastic too, especially Max Von Sydow, who is an awesome presence on screen.  I could go on, but I’m sure you’ve all read about how good the film is before, just let me tell you that it’s not as dull as it sounds.  Be brave and give it a go, you won’t regret it.