The Girl Who Knew Too Much is often considered to be the first Giallo film and is a bit of a cult classic from the Godfather of Italian horror, Mario Bava.  How does it hold up today though?  Well, not too bad, but it’s showing it’s age.

The plot is full of twists and turns but basically an American tourist, Nora, comes to Rome to visit her mother’s friend, who ends up dying (of natural causes) almost as soon as she gets there.  On the way to the hospital Nora gets mugged and knocked out cold.  When she comes to she hazily witnesses a murder before passing out again from the trauma.  Nobody believes her though as all traces are gone as she wakes up.  The film goes on to follow her quest to find the killer herself.

It’s all very Hitchcockian as you can gather from the title (although it is called The Evil Eye in the US).  The plot and dark humour running through the film are all reminiscent of the master of suspense, but for me although it’s an entertaining film, it doesn’t reach the heights of say North by Northwest or Rear Window.  It has dated badly in terms of performance and dialogue.  A voiceover that runs throughout is painfully over the top in its level of exposition, explaining exactly what Nora is thinking when we can clearly see or figure it out. 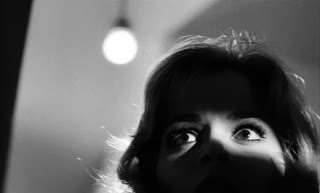 Where the film does succeed though is in its various set-pieces and in its style.  It’s beautifully shot in black and white, using dramatic contrasts and lots of shadows to great effect.  The set-pieces really show off its look and style, creating some incredibly tense and darkly beautiful scenes that make the film worth while.  A scene in an empty apartment where Nora can hear voices calling her is very effective in particular.

So it’s a bit dated and cheesy at times, but it still succeeds in its scenes of terror and is worth watching for these alone.