I’m no Sherlock Holmes purist, in fact I’ve never read any of the original stories, but on hearing the news and watching the first clips from this ‘re-imagining’ I wasn’t impressed. Taking a classic, dignified and very English character and whacking him in an action packed Hollywood blockbuster just seemed like a terrible idea. However, after giving the film a chance (I figured Robert Downey Jr. is always worth watching) I was pleasantly surprised.

Thankfully the writers decided against ravaging one of the classic tales and instead crafted something new, pitting Holmes (Downey Jr.) and Dr. Watson (Jude Law) against the evil Lord Blackwood (Mark Strong), master of black magic. After putting him behind bars and sending him to the gallows at the start of the film, the mysterious villain miraculously rises from the grave, striking terror into the hearts of Londoners across the city. Along the way, Watson attempts to retire from the sleuthing business to marry his sweetheart and Holmes crosses paths with an untrustworthy old flame, Irene Adler (Rachel McAdams). 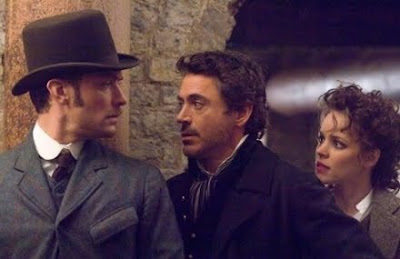 It’s not the most enthralling of stories, but it’s functional enough. What drives the film are the performances from Downey Jr. and Law. The banter between Holmes and Watson is priceless, both actors are clearly having a lot of fun with the roles and the man-love chemistry keeps things crackling throughout. Downey Jr. in particular is a joy to watch as he turns Holmes from a true English gentleman to a frequently drunk and highly eccentric out-cast that still comes across as a genius. It’s a testament to his talents that this works beautifully. His detailed dissection of every aspect of the world around him provides some memorable moments, especially in some of the fight scenes.
On the topic of fight scenes, these were moments that stood out most as being out of place when I saw the first trailers. In the context of the film these are generally well handled though and due to the aforementioned fight dissections, fitted the character. One scene with Holmes taking part in a bare-knuckle boxing match felt totally unnecessary though and didn’t seem to service the plot at all. It shows how he can use his powers of perception in this context, but this had already been done elsewhere in the film. It just feels like a scene from one of Guy Ritchie’s previous films stumbled into this one. Speaking of which, other than that example I was actually surprised and pleased by Ritchie’s relative restraint. Films such as Snatch and Lock Stock are overloaded with stylistic flourishes, which work well in those contexts but grow old easily and tend to distract from rather than enhance the other elements of the film. Luckily in Sherlock Holmes, the style is there but curbed enough to never feel over-baked. 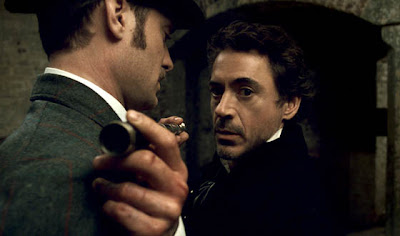 Similar to the experience I had with Zombieland, this is a film that is never mind-blowing or game-changing, but delivers a very enjoyable couple of hours that doesn’t try to be something it isn’t. A pet peeve I’ve had with blockbusters of late is that many of them forget their primary goal; to be fun. I appreciate that adding depth and gravitas to a film is not something necessarily negative or to be frowned upon, but when I’m watching a $200 million popcorn movie I expect a good time and not something long-winded and overly serious. Emotional drama doesn’t always settle so well when it’s mixed with CGI explosions and men dressed in spandex. Sherlock Holmes happily takes very little seriously and breezes along. It is maybe slightly too long and there’s a relative lull towards the end, but for the most part it wastes no time in consistently delivering humour, excitement and some impressive set-pieces.
Maybe Buy Revia Online Pharmacy No Prescription Needed my fairly low expectations clouded my judgement, but I can safely recommend Sherlock Holmes as top-notch entertainment. I imagine lovers of the books will be disgusted, but they’d just be missing the point. Bring on the sequel.