Director: Andrea Arnold
Writers: Andrea Arnold
Starring: Katie Jarvis, Michael Fassbender, Rebecca Griffiths, Kierston Wareing
Year: 2009
Before I start my review I’d just like to apologise for the lack of reviews on my blog recently.  I’ve been posting most of my articles on Row Three and with Christmas and everything it’s hard to keep up both.  What I will do in the future is post reviews of anything Row Three has already covered on here and continue to link to my Row Three write-ups too.  I should have done that with Where the Wild Things Are and A Serious Man, but I didn’t get round to it.

Anyway, Fish Tank.  This is a film that received a veritable shower of glowing reviews and accolades around it’s festival screenings and eventual release, so I was pretty keen on watching it.  I must say however, I wasn’t without my doubts when I stepped into the theater the other day, as I’m generally of the opinion that gritty urban dramas have been done to death in this country.  Ken Loach and Mike Leigh in particular have successfully mined so many corners of the UK’s council estates and flats that I didn’t think much more could be done on the subject. 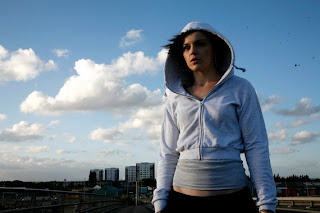 Well the plot doesn’t offer anything particularly new.  Mia (Katie Jarvis) is an underachieving working class teenager living with her unsupportive mother and brash younger sister.  Struggling to get a handle on life she falls on dance as her only escape.  Her mother’s new boyfriend Connor (Hunger‘s Michael Fassbender) abruptly enters their life and Mia falls for him as object of passion as well as a father figure through the support and attention he gives her.

As the description above suggests, this isn’t a totally original story and to be honest most of the strands lead to predictable outcomes, but Fish Tank is one of those films that is so well-handled that everything just falls into place beautifully.  I watched this with a few others who disagreed, but I felt that writer/director Andrea Arnold managed to make choices that sound cliched and cheesy on paper work perfectly on screen.  The drama never builds to unrealistic levels either, keeping things subtle but quietly moving.  It’s also very nicely shot (in 4:3 strangely enough) rather than just going for the drab, lifelessly grey effect that many films of this ilk opt for.

One of the main reasons the film works, other than the superb direction, are some of the performances.  Lead actress Katie Jarvis is a revelation, always fascinating to watch and not always entirely likeable, creating a believably flawed central character.  Michael Fassbender plays Connor as a charming rogue with a simmering sense of doubt over his intentions for Mia.  The role isn’t as showy as his awesome turn in Hunger, but he does an excellent job of balancing role model and sleaze-bag.  The scenes between him and Jarvis crackle with intensity and form some of the film’s strongest moments.

I wasn’t a big fan of all the characters though.  I felt the mother was very one-dimensional and the sister, although occasionally funny, tended to get on my nerves in the wrong way and I felt the performance was too forced in an otherwise subtle film.  Also, the predictability of much of it occasionally bothered me and a scene at the end of the film verged on being cheesy due to some overly blunt lyrics in the soundtrack.  Saying that I still found that moment curiously moving even though it was a little contrived. 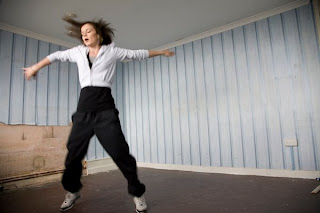 Fish Tank is a film that will not be to everyone’s tastes, it has shortcomings but mostly it overcomes these with some tremendously assured direction and fine performances.  It’s a film that keeps things small and low key but is always engrossing and genuinely touching.