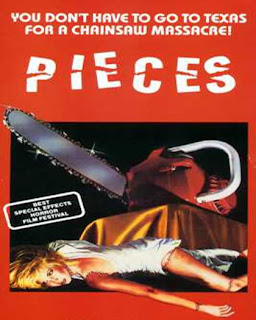 Year: 1982
Director: Juan Picquer Simon
Writers: Dick Randall, Joe D’Amato & Buy Brand Levitra Online Pharmacy No Prescription Needed Juan Picquer Simon
Starring: Christopher George & Edmond Purdom
Pieces is quite an experience, and I don’t want to go into too much detail here, partly because I’m on my fourth review in a night, but really because it isn’t a film to be analysed in any depth. Just turn your brain off, get a few beers and enjoy.

One of the nuttiest trashy horror films from the 80’s, Pieces tells the classic tale of a disturbed youth who grows up to be a teen-stalking mass murderer on a college campus. Sounds textbook enough, and in narrative terms it certainly is, but it’s just so ridiculous. The dialogue and performances are utter comedy – pure cheese with plenty of absurdities thrown in for good measure. Add lashings of gore, plenty of nudity and a completely random kung-fu scene and you’ve got all the makings of a grindhouse classic.

There’s not a lot more to say about this film without just listing ridiculous moments. Let’s just say if you’re in the mood for a well constructed, psychological thriller look elsewhere, but if you want to see buckets of blood, random nudity and a bunch of Z-list actors making fools of themselves, then find a copy right now.